ABC has blessed a quintet of new shows with series orders — including one about a man with a higher calling.

The network has picked up spiritual dramedy The Gospel of Kevin, political comedy The Mayor, refugee drama The Crossing and Shondaland legal drama For the People for next season, TVLine has learned. Also, the network handed out a series order to the untitled Zach Braff comedy formerly known as Start-Up.

The Gospel of Kevin stars Jason Ritter (Parenthood) as a down-and-out guy who’s visited by a celestial being and given a mission to save the world. JoAnna Garcia Swisher (Once Upon a Time) co-stars as Kevin’s sister Amy.

The Mayor stars Brandon Micheal Hall (Search Party) as a young rapper who runs for mayor as a publicity stunt and actually gets elected. Yvette Nicole Brown (Community) and Lea Michele (Glee) co-star.

The Crossing stars Steve Zahn (Modern Family) and Natalie Martinez (APB) in a time-travel story where American war refugees from the future travel back in time to present-day America, seeking asylum. Watch a teaser:

For the People stars Britne Olford (The Flash) and Lyndon Smith (The Originals) as young lawyers handling high-stakes federal cases and juggling their busy personal lives. Shonda Rhimes is onboard as an executive producer. 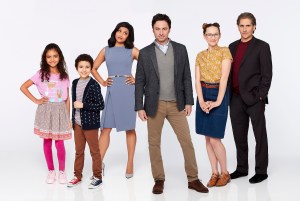 Finally, Zach Braff will headline an untitled comedy (fka Start-Up) about a husband and father who decides to quit his job and start his own company from scratch. Tiya Sircar (The Good Place) and Michael Imperioli (The Sopranos) co-star.

Got early thoughts on these five new ABC shows? Drop ’em in a comment below.