TV show titles don’t get much more provocative than Amazon’s I Love Dick. (The official press kit, with the title emblazoned on it in big red letters, wasn’t easy to explain around the office.) But it’s a fitting warm-up for the show itself, premiering this Friday: a sexually frank and intellectually challenging comedy that, most importantly, gives Kathryn Hahn the leading role she’s long deserved.

Hahn stars as Chris, a frustrated filmmaker who’s rapidly approaching a full-blown midlife crisis. She’s accompanying her stuffy husband Sylvere (Griffin Dunne) to the wind-swept prairies of Marfa, Texas, where he’s a new fellow at a prestigious writing institute. (His latest academic theory: “The Holocaust… there’s something new afoot.” Christ, even his name is pretentious.) Chris hates being labeled “the Holocaust wife” by the other writers in Marfa, and longs to get the hell out of Texas and back to her own artistic pursuits… and then she meets Dick.

Dick — played by a lean, well-aged Kevin Bacon — is the revered artist who runs the institute, and he’s the very portrait of soft-spoken masculinity. (Chris first spots him casually riding a horse through the streets of Marfa.) He and Chris are flirty from the start (“You want to know how big… my ranch is?” he asks her coyly), and her raw animal attraction to him inspires a flood of artistic inspiration in her, which comes out in the form of raunchy lust letters she writes to him, all starting “Dear Dick.” Her infatuation even kick-starts her dormant love life with Sylvere: “You’re like a Roman god, bringing the spirit of sex into our lives,” she tells Dick in one letter.

And boy, does he bring it: I Love Dick is positively infused with sex, with just about everybody getting naked at some point. It’s certainly not safe to watch on your laptop in public, so be careful out there, but it’s refreshing to see a show explore a middle-aged woman’s sexual urges — a topic that’s all but invisible elsewhere on TV. And Marfa is an intriguingly novel setting for a TV series, with its humble rural landscapes serving as a humorous contrast to all the insufferable navel-gazing floating around among the artists. 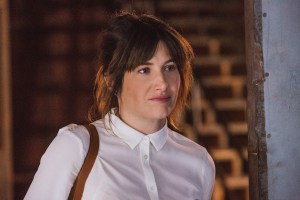 Now it’s time to sing the praises of Kathryn Hahn. From Parks and Rec‘s cynical political operative Jennifer Barkley to Transparent‘s gentle rabbi Raquel, Hahn’s understated (and underrated) versatility has been making other people’s TV shows better for a decade. But I Love Dick is all hers, and she takes it and runs with it. Chris is a complicated woman, to say the least, and not always an admirable one: a mix of artistic insecurity (asking herself that essential question, “Am I any good?”), rebellious feminism, whiny immaturity and long-repressed desire. Hahn plays every note of that with remarkable precision, never forgetting to be funny in the process. Her terrific lead performance, long overdue as it is, is a gift from the (Roman) gods.

Jill Soloway, who co-creates here with Sarah Gubbins and directs the pilot, continues the funky aesthetic she established on the Emmy-winning gem Transparent: deeply flawed people flailing their way through life and hurting each other in the process. Soloway’s comedies aren’t three-jokes-a-minute assembly lines; they’re sharply observed, occasionally messy snapshots of life as it’s actually lived, with a boundlessly generous humanity. This is all to say: If you enjoy the poignant dysfunction of the Pfeffermans, I Love Dick is probably up your alley as well. (Great, now I’ll be flagged by Google for putting “I Love Dick” and “up your alley” so close to each other in a sentence.)

There are a few storytelling snags here worth noting. Bacon has an earthy presence as Dick, but in the first few episodes, Dick remains just a cipher, almost a figment of Chris’ fascination. It’s hard to reconcile a supposedly feminist narrative with a main female character who ravenously craves the attention and approval of a traditional manly-man. And I Love Dick‘s scope is a bit too narrow, with only a few characters fleshed out at all beyond Chris, Sylvere and Dick. I like a good “slice of life” story… but it’s possible the slice of life we’re served here is too thin.

In fact, I have no idea what a Season 2 of this show might look like. It’s based on a novel, which suggests a closed-ended story, and feels at times like an indie movie cut up into eight half-hour episodes. But I trust Soloway’s storytelling instincts, and she’s done the hard work already in nailing down a distinctive setting and a core few characters who can ping-pong off each other in fascinating ways. And anchoring all of it is Hahn’s vital, vulnerable lead performance. I Love Dick is a scruffy, unpolished work in progress… but there’s a whole lot to love about it.

THE TVLINE BOTTOM LINE: Amazon’s I Love Dick is a smart, sexy meditation on love and art, with a terrific lead performance from Kathryn Hahn.