On the Criminal Minds Season 12 finale, Reid went toe-to-toe (and at one point danced cheek-to-cheek!) with the person who had framed him for murder. In the end, was he able to divine the “secret” he was keeping from himself, and in doing so save his abducted mother’s life?

That in fact the game Cat Adams was excited to play with Reid, very much akin to their first “date” at Harry and Glenn’s. Using Reid’s wristwatch to mind the time, the incarcerated hitwoman gave him four hours to ask any questions that might help him divine the secret he is keeping, but aghast to admit to himself. He gets one guess, when ready — but if he is wrong, Mom gets whacked.

As Cat dove into their discourse — with JJ observing at least some of it — she invited Reid to close his eyes and imagine it as a more date-like situation, moving the scene to an opulent, romantic setting. (#EveryoneSoPretty!) Soon, Cat revealed the canary she was nibbling on: she is pregnant… by Reid! 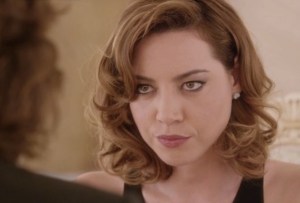 that after Lindsey Vaughn drugged Reid down in Mexico, her accomplice had specific instructions to pass herself off as Maeve, his ill-fated OTL, and in doing so… um, er, well, procure from him what might be needed to put a baby in Cat’s belly. Hearing this bombshell, JJ fetches Cat’s medical records and confirms that she is expecting and the timing syncs up (complete with a November sweeps due date!).

Back at the BAU, they dig into any possible Cat/Lindsey connection, trying to figure out why one hitwoman would do another’s bidding. A convo with the fella who sells Lindsey her munitions lets slip a clue that puts them on the right (if predictable) track: the ladies are lovers. Armed with that nugget, and having tracked Lindsey down at a cabin owned by the prison guard Cat used to keep tabs on Reid, the BAU presented Diana’s captor with a video stream of Reid’s requested slow dance with Cat. Lindsey looked on as Reid admitted to liking his painful poisoning of his inmates, and then as he surmised that Cat was not pregnant by him, but by the guard she was in cahoots with. And it was all to leverage Reid into realizing that he wishes the baby was his, “because you and I… we deserve each other,” he allows. Learning of her lover’s infidelity, Lindsey set down the C4 trigger she was clutching and turned herself over to the feds.

But the BAU’s work 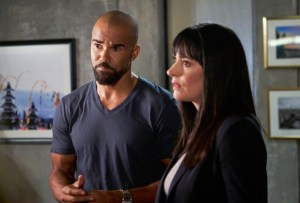 for the night was not done. Far from it. Instead, they return to the office to yes, reunite Reid with his mom, but also find Derek Morgan there. After some hugs and hellos, the former team member gets down to business, showing the odd text he seemingly got from Garcia, luring him to a (non-existent) safe house to see Reid. After Garcia confirms she in fact was hacked, and as Derek stays behind (having made promises to his family), Prentiss, Rossi, JJ, Tara, Alvez and Walker hop into a pair of SUVs and speed to the origin of the bogus message.

But Scratch, if he in fact is behind this, manages to stay steps ahead, by ambushing the agents not upon their arrival but before, by blowing out their tires and then plowing an 18-wheeler into both of their vehicles at high speed.

And that, my friends, is how you quickly add a half-dozen “possible fatalities” to TVLine’s May Sweeps Scorecard on Thursday.

What did you think of the episode “Red Light”?