Has Mark Isaiah become the Sanjaya Malakar of The Voice? Going into Monday’s performances by Season 12’s Top 10, it certainly seemed so. Though more than half of you who voted in our elimination poll last week would have sent the Austin Mahone wannabe packing, he remained in the contest, the recipient of a puzzling instant save. Did he finally hit upon a song that would allow him to win something more than Adam Levine’s admiration and fourth place in a high school talent show? Did Vanessa Ferguson Riri-cover from her “Diamonds” misstep? Did Chris Blue manage to top his rendition of “When a Man Loves a Woman”? And what reduced Aliyah Moulden to tears? Read on…

Jesse Larson (Team Adam), “Jungle Love” — Grade: B | Though Jesse said during rehearsal that he and his band had often performed The Time hit, his rendition wasn’t sounding like it was going to make anybody’s (Morris) day. On stage, he was fine — and even, adorably, busted a move — but the song didn’t often showcase the power of his voice, and, lacking the charisma of, say, a Chris Blue, he wasn’t able to sell it. Maybe I’ve just seen Purple Rain too many times. I like Jesse: good voice, comes off like a helluva guy. But this wasn’t his finest hour. Or, you know, his finest two minutes or so.

Aliyah Moulden (Team Blake), “Jealous” | Advised by her coach to channel into her performance her anger and sadness over losing her father, the teen did just that but became so overcome by emotion that she broke down in tears and had to stop singing before she managed to get out the last line. If you didn’t get at least a little choked up watching that, you’re probably the kind of heartless bastard who’d complain that I’m not going to grade her for this but instead say that she’s generally a terrific, promising singer and leave it at that. 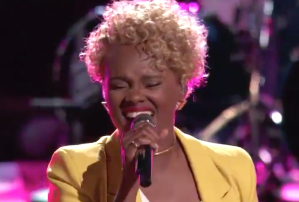 Vanessa Ferguson (Team Alicia), “Doo Wop (That Thing)” — Grade: B- | Suddenly blonde, Vanessa threw herself into the Lauryn Hill classic with vigor and certainly seemed at home on the number — rapping fast enough to be an auctioneer and working the stage like she was doing laps. Vocally, it was neither her best nor her most memorable performance, but it was definitely an improvement over last week.

Mark Isaiah (Team Adam), “Sign of the Times” — Grade: C | Ahead of Mark’s performance, I didn’t have high expectations. And, unfortunately, that was the right way to go into his Harry Styles cover. He sounded better when he got to sing louder, but anytime he had to hit falsetto notes, his voice either vanished or paled in comparison to more seasoned singers (think: Chris, TSoul). So again, as nice a fellow as I’m sure he is, as much potential as he may have, he doesn’t have the chops — at least not yet — to keep advancing in this competition. 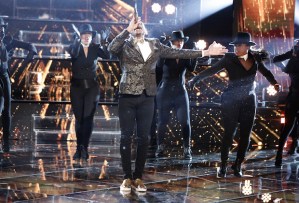 Chris Blue (Team Alicia), “24K Magic” — Grade: A- | Unlike dear Jesse, Chris was just born to dance. Sing, too, obviously. But the dude has moves — and so much stage presence, he should probably only play stadiums. So, given the chance to put his stamp on this funky Bruno Mars hit, he didn’t merely turn in a performance, he put on a freakin’ show. Vocally, it wasn’t his best — a little shouty at times, and certainly shoutier than we’re used to from Chris, who’s usually so completely in control of his voice. But that performance… damn. I’d buy a ticket to that concert.

Lilli Passero (Team Adam), “Unforgettable” — Grade: C | When it was revealed in rehearsal that Lilli was going to be doing the Nat King Cole gem, I’ll admit, I was scared. I love me some Lilli, but this was either going to go flawlessly or disastrously. And? Yeah, that wasn’t great. She sounded off a lot, and I don’t think she nailed the timing issue that had befuddled her in practice, either. I’ll be sorry to see her go, but it’s time.

Lauren Duski (Team Blake), “Tell Me Why” — Grade: A | And right on cue, this is why it’s time for Lilli to go. She has competition like Lauren that just never falters. Though the country girl has mostly been the queen of the ballads in Season 12, she took on this uptempo Wynonna Judd song and absolutely slayed it. She sounded as confident as she looked up there, and she looked like a future as a dentist should never have been an option for her. Heck, I’ll even download this later, it was that solid. 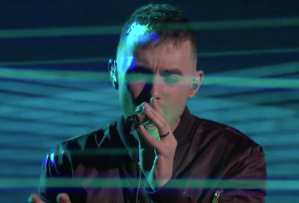 Hunter Plake (Team Gwen), “Higher Love” — Grade: A | Not only did Hunter sound typically stunning on his modern redo of the Steve Winwood hit — that falsetto… jeez! — but I even understood some of the lyrics he was singing for a change. (Maybe he finally read your comments. Or maybe the song is just that familiar.) I wouldn’t have minded the arrangement letting him go bigger at times than it did, but it was a cool arrangement nonetheless, and aside from that one little quibble, it was pretty flawless.

TSoul (Team Blake), “At This Moment” — Grade: A | Capitalizing on the vaguely vintage sound that’s become his calling card, TSoul went a step beyond, giving a gloriously raw performance that suggested that he could really give Chris and Lauren a run for the title. That last long note alone should put him in the semis, if not the finals, too. Billy Vera owes him a thank-you note for breathing that much new life into the oldie-but-a-goodie.

Brennley Brown (Team Gwen), “Anyway” — Grade: A- | Gwen’s country girl sounded a little wobbly to me on the verses — was that an excess of vibrato or a hint of uncertainty? But heaven knows, if there was a problem, the teen solved it on the choruses, singing with a power and absolute sureness that was downright inspiring. Calling it now: Final four will be Brennley, Lauren, Chris and Hunter.

So, who did you think gave the best performance. Vote in the poll below, then hit the comments.