Although it feels as if Dancing With the Stars‘ 24th season just kicked off, we’re already two weeks away from the finale — and, according to judge Len Goodman, at least one of the five remaining contestants has overstayed his welcome on the dance floor.

Though Len has always taken on a Simon Cowell-esque role in the ballroom, prone to being extra nitpicky when judging routines, the self-proclaimed “fuddy-duddy” might have overstepped his critical boundaries on Monday, after Bonner Bolton and Sharna Burgess performed an Argentine tango.

Here’s what went down: In the video package of Bonner and Sharna’s rehearsals, the pro bull rider seemed rattled by Week 8 stress, snapping at Sharna not to get mad at him when he wasn’t picking up the choreography quickly. (They ultimately pulled it together for the actual dance, even if it was the night’s most “meh” duet.)

But when it came time for Len’s critiques, he didn’t just come down on Bonner’s tango skills; instead, he basically told the novice that he didn’t deserve to be in the Top 5.

“Listen, you got frustrated,” Len began. “Please don’t blame the judges. Blame the viewers, because really, you’ve gone a bridge too far. I’m sorry, but you should have been…” 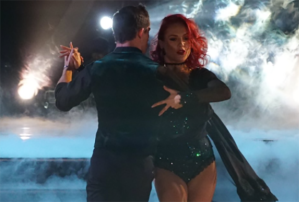 As Len trailed off from his very bold point, the crowd booed, and Carrie Ann Inaba gasped, “Len!” But he continued: “You get a happy ending. It’s just where you stop the story, and if the story goes too far, you get frustration. You’ve got two full dances to do. It’s hard work. I admire your pluck, I admire your guts, but…” (Here, he was thankfully interrupted by host Tom Bergeron, who diffused the awkwardness by joking, “By the way, that’s [Len’s] pep talk.”)

Of course, it’s been evident for weeks that Bonner is among the season’s weakest competitors — and it does seem unfair that he remains on the show when Heather Morris and Nancy Kerrigan have already been ousted. But coming from Len, whose job is to be as supportive as he is tough, that comment seemed awfully cold.

Before you tell me your thoughts about Len’s harsh words, let’s review how each couple fared with their duet:

The remaining contestants also performed trio dances, enlisting another member of the Dancing troupe for a routine that would add to their cumulative score for the evening. Here’s how those were scored:

Your turn! Did Bonner and Sharna deserve to get booted this week? And what did you make of Len’s harsh criticism for the bull rider? Hit the comments with all of your thoughts on Monday’s episode.