Warning: The following contains spoilers for Sunday’s The Arrangement.

Megan’s acting chops on The Arrangement are really going to be put to the test following Sunday’s season finale.

During the episode, the kidnapped actress was taken to an Institute of the Higher Mind facility, where everyone wore neutral smocks that looked like they were from Banana Republic’s dystopia collection. (As if that wasn’t disturbing enough, the walls of the building were covered in giant IHM mottos like “Life is a living thing” and “Productivity is front-facing.”) 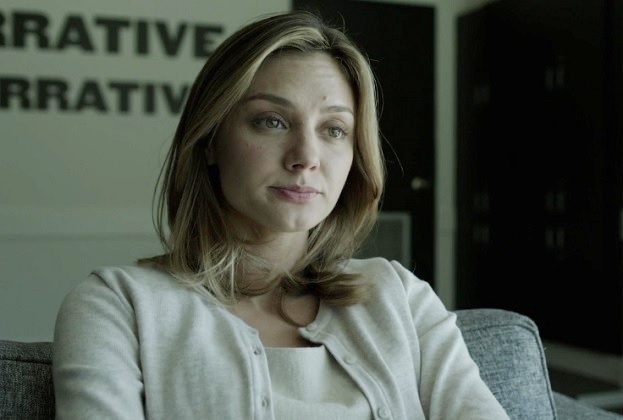 After initially being reluctant to embrace IHM’s “therapy” and a failed escape attempt, during which it was revealed that Kyle knew about the scheme, Megan eventually gave in. She took Terence’s drugs, which caused her to relive the night she killed her sexually abusive step-brother. The process helped Megan realize that her actions weren’t just self-defense, but payback. Following the breakthrough, she returned to her fiancé a changed, IHM-friendly woman… but it was all an act! In the end, Megan told her friend Shaun that she needs her because she’s “going to burn the whole thing down.”

TVLine spoke to star Christine Evangelista about Megan’s declaration of war against IHM and what it means for her relationship with Kyle.

TVLINE | At what point did you know that Megan was faking her transformation?
We get the script right before we start shooting, so I saw what was happening and where she was going with it. I didn’t know how it was going to end. I didn’t know her testimony at the end. That was very surprising for me, and I think it’s really going to take us into the next season. But of course, I knew what her objective was: to get out of the situation that she was in, to get back to Kyle, to get out of the facility. At the beginning of the episode, she’s sitting across from a guy who has been there for [eight] months, and she’s like, “OK, this isn’t something that I can do. I have to find a way to get out of there now.” She comes up with that plan.

TVLINE | When you were reading the script, did you think to yourself, “Is she faking it in this moment?” Or did you know before you even started reading?
That’s an interesting question, because I think it has two parts to it. I knew very early on that she was going to fake it to get out of there. But I do think the drugs that they give her that she decides to take, like the truth serum, that really is true. I do think she has some sort of break there, and she does have some sort of release. She’s acknowledging what happened for the first time ever and the truth of the situation that she was in. While, of course, she was attacked by her step-brother, I do think that she had some sort of psychotic break in the middle of it. It was more than just a self-defense thing. She took it a step further in that psychotic break. There is some truth there, in terms of her deciding that she needs to forgive herself to move past it. 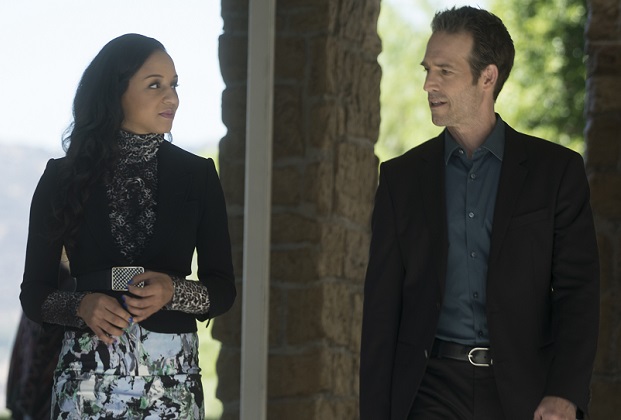 TVLINE | Megan reveals her plan to Shaun, who is her friend. But Shaun’s also bought into IHM and is working for them now. Will Megan regret telling her the truth?
We’ll see. I’m very interested to see how that will play out. Shaun knew the secret all along. She knew what happened to Megan. Shaun knew about the brother. Shaun knows about the contract, too. And Shaun has proven herself to be a good friend, an honest friend and a very loyal friend. She’s an interesting player and will perhaps help her in Season 2 or not. Most of Megan’s friends have obviously been tested throughout the season, and only a few people have been able to remain true. Hopefully, she’s one of them, but I don’t know.

TVLINE | Her agent Leslie, who doesn’t take any of Terence’s bull and looks out for Megan’s interest to an extent, could be a good ally in this fight.
Perhaps. But I don’t think Megan is prepared to tell Leslie [the truth]. As we see at the end, Megan doesn’t dismiss Leslie, but at this point… she’s not looking for any distractions, anyone at all that she possibly couldn’t trust. 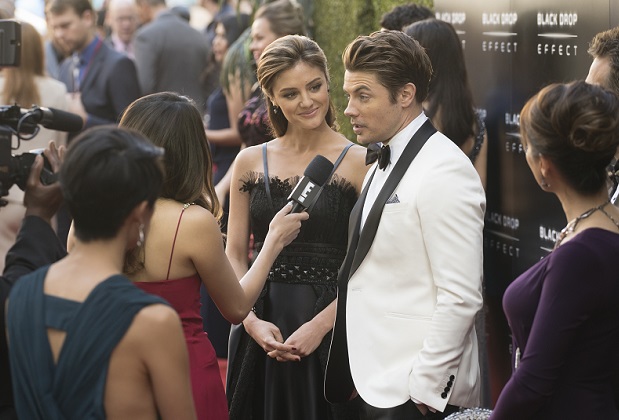 TVLINE | What does this turn mean for Megan’s relationship with Kyle? Does she want to take him down, too?
That is a very, very good question. Megan is at a point now where she either turns against him or she realizes that she wants to take him with her, and I’m not sure which direction it’s going to go in. I know that they genuinely love each other, and she wants to trust him, and perhaps she wants to help him in some way. Maybe a part of her plan is to get him out of the Institute? Or maybe it’s to take them all down?

Arrangement fans, what did you think of the season ender? Grade it via the poll below, then hit the comments to back up your pick!