Each episode of Aziz Ansari’s Netflix comedy Master of None is kind of like a blind date: You’re never exactly sure what you’re going to end up with.

That’s still true in the long-awaited Season 2, which debuts next Friday, May 12 after a lengthy year-and-a-half layoff. Ansari — the likable Parks and Rec goofball who writes and directs here, as well as starring — seems to enjoy defying expectations, crafting each episode of his cosmopolitan rom-com as a self-contained vignette that may or may not connect to the episodes around it. This structure is ultimately limiting in a few ways I’ll get to later, but no matter: Season 2 is still a breeze to watch, with a distinctly low-key charm. 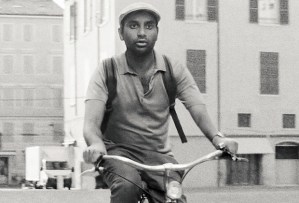 Last season left off with struggling actor Dev (Ansari) chucking his New York life and moving to Italy on a whim to take pasta-making lessons. And Ansari goes full-on Fellini in the premiere, shooting it in glorious black-and-white with nearly all the dialogue in subtitled Italian. Dev’s soaking up the Italian lifestyle, biking through sun-dappled villages and sipping freshly brewed espresso. And yes, the food porn is back: Master of None luxuriates in Dev’s culinary indulgences, with drool-worthy close-ups of noodle bowls and barbecued rib racks. Even if this show weren’t funny at all, you could watch it on mute and appreciate it as a travelogue/food documentary.

Luckily for us, though, it is funny: Ansari and co-creator Alan Yang (who wrote for Parks and Rec) pepper each episode with sharp observations about how weird it is to be single these days, as Dev continues his futile search for Miss (Swipe) Right. (One standout episode is a half-hour montage of first dates Dev has at the same restaurant — most of them unsuccessful.) It’s all very laid-back, with long scenes of dialogue that are so loose and free-flowing, they feel improvised, even if they’re not. The show doesn’t feel obligated to check off boxes on a sitcom to-do list; like Louie, its spiritual cousin over on FX, Master of None follows its storytelling muse, wherever it leads. And Ansari proves he’s got some serious filmmaking chops as a director, with an eye for the romantically absurd — and absurdly romantic.

After a couple episodes abroad, Dev returns to New York in Episode 3, where Ansari tackles a hot-button issue: Dev’s Muslim upbringing. Now other shows could’ve gotten preachy or political here, but Master of None keeps it light, with flashbacks to a young Dev tasting forbidden bacon for the first time — for him, a truly religious experience. Plus, it means we get to spend more time with Season 1’s breakout star, Aziz’s real-life dad Shouketh Ansari, who’s always a treat. (He has more broken iPads for Dev to fix.) Again, just when you expect Master of None to zig, it zags.

Now there is a slight flaw in all of this breeziness: It never really goes anywhere or builds to anything, plot-wise. Season 1 at least had the on-again, off-again romance between Dev and Rachel (SNL vet Noël Wells) to anchor it, but with Rachel off in Japan, Season 2 isn’t anchored to any plot thread at all. Sure, the self-contained episodes are fun, but eventually, I wanted to see Dev progress a little, to develop as a character from one episode to the next. As it is, it’s hard to get emotionally invested in a character — and a show — that wanders off to somewhere entirely new each episode.

But hey, not every show has to tell a rigidly serialized story, right? (Too many shows are trying to do that these days, anyway.) The subtle joys of Master of None more than make up for any minor structural quibbles. Ansari and Yang have created something special: maybe a bit lightweight and low-stakes, but with a confident, seemingly effortless appeal. If you’re not headed anywhere special… you might as well eat well and laugh a lot along the way.

THE TVLINE BOTTOM LINE: Aziz Ansari delivers more low-key laughs and scrumptious food in Season 2 of Master of None — even if the meal is less than substantial.