The CW’s Arrow this week offered a message in a bottle… episode.

As Oliver and Felicity grappled with their imprisonment in the bunker by both an EMP explosion (that left the latter paralyzed anew) and the lair’s many nuclear-proof safeguards, they got to talking — broaching topics that 11 months ago they agreed it was too soon to touch.

In flashbacks that took place between Seasons 4 and 5, we saw that in the wake of a successful nabbing of a bandit, Curtis set the stage for rekindled romance by leaving Oliver and Felicity with abundant Chinese food and wine. And indulge, they did.

After loosening up with some vino, a salmon ladder tutorial turned into an entirely different sort of physical exertion, as Felicity declared, “I had a lot to drink” before pulling her ex into a steamy clinch. They then sank to the workout room floor to… burn some calories.

Afterward, though, Felicity acknowledged, “This was nice, but it doesn’t change things between us.” She states that even if there had been no William, “there would still be no us, because you don’t trust me.

“You don’t trust anyone, and I don’t know why,” she continued. “If I did, things might be different.” Until then, “I love you but can’t settle for anything less than your full trust,” she makes clear.

Cut back to 11 months later, and Oliver — unable to stand upright after weathering three explosions, one sizable fall, getting stabbed by a bolt and inhaling a heavy dose of methane — comes clean to Felicity about what his torture at Adrian Chase’s hands brought him to realize: that a part of him, bigger than he wants to admit, enjoyed the killing that honoring his father’s legacy led him to do.

And that, he says, is what led him to not back her play by working with Helix (though the logic of that argument escaped me a bit). As he put it, he didn’t support her choice not because of distrust, or worry that she’d become like him, but because “I’m not man you fell in love with.” Felicity counters that Adrian Chase didn’t make him a killer, the “five years in hell did,” followed by five years of brutal crimefighting. And the fact that he didn’t turn into a monster from all that “proves the kind of person you are.”

After they were rescued by Diggle, Curtis, Rene, Dinah, an A.R.G.U.S.-augmented T-sphere and some improbable climbing physics, Oliver summoned Felicity to his hospital bedside to say that he “appreciated what she said” during their ordeal, and “hopefully it will stick.” Felicity in turn apologized for “being a hypocrite,” explaining that after losing Billy, she chose to emulate Oliver by doing whatever necessary to get Adrian Chase. Having had that “tiniest taste” of Oliver’s island odyssey, “I understand why you had to lie to me about William. And for the extent I judged you, I’m sorry.” She then urged him to “find out” what kind of person he really is.

As for why Chase went to this trouble to incapacitate Oliver: As worried, we see him introduce himself to young “Matthew” fka William, in his new town, explaining, “I knew your father… and he knew mine.” 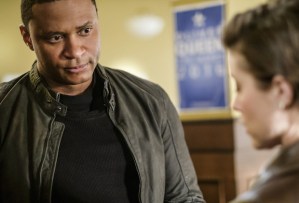 in the episode: Diggle and Lyla butted heads the morning after their first blow-out, after which he slept on the couch. She chided him for taking the stance he has, seeing as his work with Team Arrow isn’t exactly all about morality. Things are cool between them for much of the mission to rescue Oliver and Felicity, and then get chillier when Dig realizes that A.R.G.U.S. stole Curtis’ tech. At the end of the day, though, Lyla successfully argues that Diggle always backs Oliver, even when he doesn’t agree with his choices — and that she, as his wife, deserves at least the same courtesy. Diggle agrees, and with her voluntary turnover of a list of A.R.G.U.S. black ops, they agree to “no more secrets,” and commit to making things work.

What did you think of the episode “Underneath”?