Amanda Peet’s latest project, the under-the-radar Brockmire, is about to give birth to its most politically incorrect episode yet.

On the IFC comedy, the Studio 60 and Togetherness standout plays Jules, the owner of a minor-league baseball team who hires (and subsequently falls for) disgraced MLB announcer Jim Brockmire (played by man-of-a-million-voices Hank Azaria). After revealing to the title character that she was pregnant with his child at the end of Episode 5, Wednesday’s half-hour (airing at 10/9c) finds Jules and Brockmire mulling over whether they want to have the child, or whether she should have an abortion.

Memories From the Set: Amanda Peet 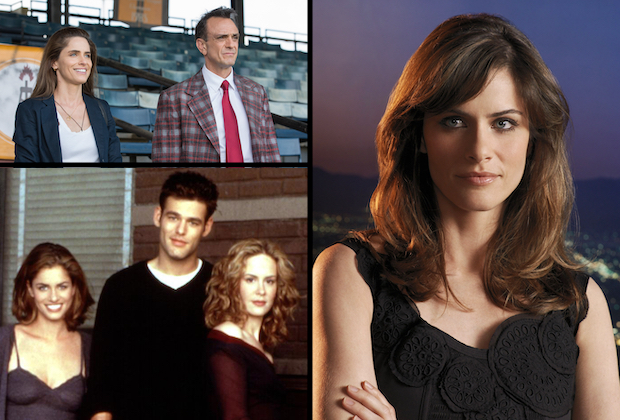 “It’s a really unsentimental look into their decision about whether they want to be, or whether they’re even ready to be, parents,” Peet says. “In its own very subtle way, it’s a very feminist take on the subject.” And as viewers will soon discover, it’s pretty much the only subtle thing about the episode, which Peet aptly describes as “incredibly bizarre.”

After coming to a mutual decision, Jules and Brockmire embark on an unforgettable road trip to Pittsburgh. At one point, Jules is forced to do something that she is uncomfortable with, and, without giving too much away, let’s just say it may induce an involuntary spittake.

In addition to Brockmire, we asked Peet to reminisce about some of her other memorable TV roles. Flip through the attached gallery — or click here for direct access — to see what she has to say about her first primetime gig on — what else?  — Law & Order, as well as her time on The Good Wife, How I Met Your Mother, Togetherness and more.