For Once Upon a Time‘s Emma Swan and Killian “Captain Hook” Jones, their imminent, musical wedding day (airing Sunday at 8/7c) brings with it few jitters — *save for one looming threat from the Black Fairy.

The ABC series’ co-creators, meanwhile, did not take lightly the task of bringing to the screen such an anticipated affair. “It’s intimidating to throw a fairy tale wedding, especially for Hook and Emma,” affirms Adam Horowitz. Part of the difficulty, he quips, is “knowing which pirates to invite and which not to!” Eddy Kitsis meanwhile says it was also critical to find “a nice chuppah.”

Turning serious about doing right by the show’s heroine, Kitsis says, “For us, the most important thing is that [the wedding] was intimate and that you really understood that this was a real milestone in Emma’s growth. She started the show by denying she had a child, and we see her walls up. So for her, in marrying Hook, she was also embracing everything. She was really moving forward with her life, and that is what we wanted.”

That, and “hopefully to make some people cry.”

And cry with joy, some fans might. During TVLine’s visit to the set for the filming of the episode — and amid discussing the episode’s purely musical aspects (detailed here) — Jennifer Morrison and her leading man, Colin O’Donoghue, also shared insight into the bride and groom’s mindset, as their big day unfolds. 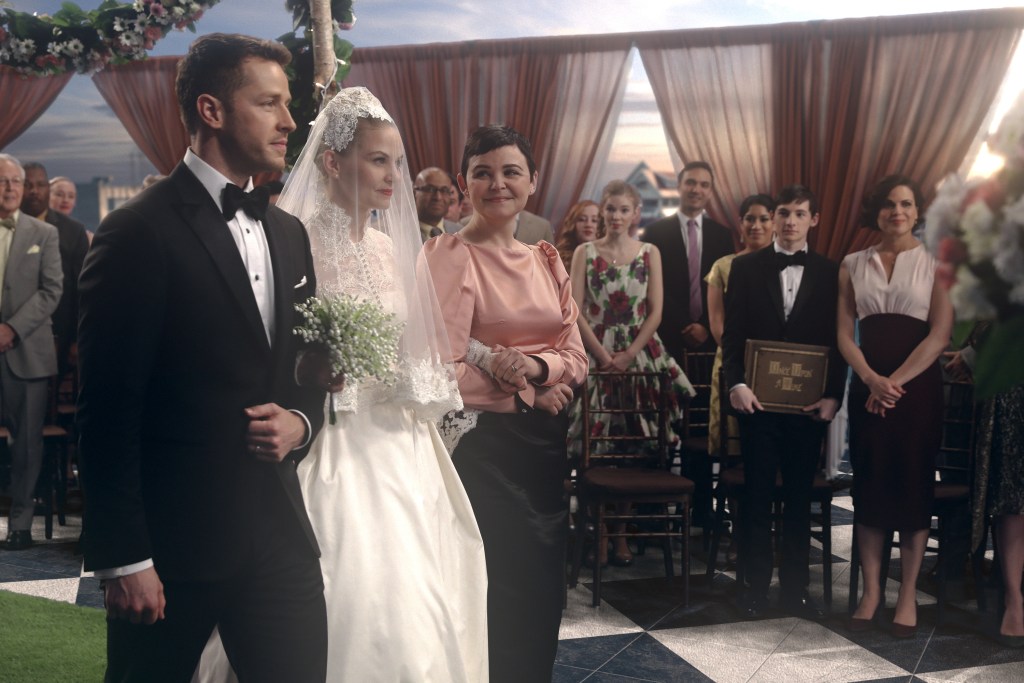 remind me, have you worn a wedding dress before for any role?
JENNIFER MORRISON | Yeah. I’ve worn a lot of wedding dresses.

TVLINE | How have those past weddings gone?
MORRISON | Fine, I guess. [Laughs] But this is the first time I’ve actually said vows.

TVLINE | As joyous as the day is, is there a tiny, dark cloud looming out there somewhere?
MORRISON | Well, we think that we’ve handled the Black Fairy (played by Jaime Murray), and then we end up realizing that we haven’t, and that the threat is still looming. So we were hoping to go into the wedding not worrying about her showing up, not worrying about her interrupting it, not worrying about her ruining anything, but it turns out that there’s a possibility that she could be a problem. 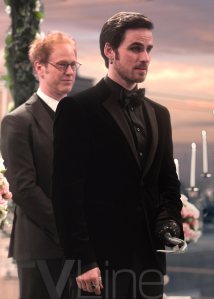 TVLINE | In the group dance number I just saw being filmed, are your characters just letting themselves be free at that moment, pushing any worries aside?
COLIN O’DONOGHUE | At this point in time, they’ve just decided whatever’s going to happen is going to happen. We need to make the most of time that we have together now because it’s Storybrooke and you never know what’s going to happen.
MORRISON | And we know that we want to be together. We know there are no doubts about that. We just want to move ahead with it and enjoy the moment.
O’DONOGHUE | There’s a little glimmer of hope in the middle of a pretty desperate situation.

TVLINE | Watching the group dance number, I felt like this is the happiest Emma has let herself be. In the past it’s always, “I’m happyish, but….”
MORRISON | A lot of the song that we shot yesterday (Morrison’s solo, titled “Emma’s Theme”) is about Emma getting to that place in her life, which I think kind of marks the final transformation from ugly duckling to swan. She overcomes the last of her fears and baggage, and realizes that this song has been within her, her whole life, and it holds a power that she didn’t realize.
O’DONOGHUE | In [the group number] or the previous scene that we filmed, it’s all happiness. There’s no negative aspect. They know that what’s going to happen is going to happen, and they don’t care. They’re just expressing how much they love each other, and…
MORRISON | And that’s it.
O’DONOGHUE | That’s it.

But again, the possibility that the Black Fairy is still in play and gunning for “The Final Battle” (as in the title of next week’s two-part finale) cast a slight pall over the proceedings, as the time to be pronounced husband and wife nears. “Weddings on the TV series Once Upon a Time traditionally are frought with unexpected circumstances. And this is no different,” Horowitz reminds. Or as Jared Gilmore, whose face fills the hour’s very final frame, puts it: “That’s Once Upon a Time for you, always that looming threat. Evil stuff going on!”