Get it together, Adam Levine. Get. It. Together. Based on the poll that followed last Tuesday’s recap of The Voice’s Top 12 results show, you really, really dislike Mark Isaiah. But, reading between the votes, isn’t it actually the teen’s coach that we’re most eager to eliminate? If the kid couldn’t get together a passable rendition of Drake’s “One Dance,” shouldn’t Adam have steered him in another direction? While we’re on the subject of the Maroon 5 frontman, his selection of Shania Twain’s “Man! I Feel Like a Woman” for Lilli Passero was right on the border between idiotic and unforgivable. Did he redeem himself as a coach as Season 12’s Top 11 took to the stage Monday? And how much more did the night make it look like it was all going to come down to Chris Blue vs. Lauren Duski? Read on and find out, then vote in our Top 11 poll…

Stephanie Rice (Team Alicia), “Behind Blue Eyes” — Grade: B- | After saying last week that she wanted to rock out, Stephanie gleefully embraced her chance, taking the Who hit from haunting to raucous and back. But, though she certainly seemed to be having a great time reaching for a Janis Joplin-esque growl, she sounded — and, wouldn’t you agree, in general sounds — better in the softer moments, when she has more control over her vocal.

Aliyah Moulden (Team Blake), “Take It Back” — Grade: A- | Credit where it’s due — that Blake Shelton knows what he’s doing as a coach. His song choice of the bluesy Reba smash for his giggly teen star-in-the-making was inspired. Did she nail it? As an audience member yelled out before her performance, “Ya dang right!” She sounded like a million bucks. Not sure Blake got the vocalist/band interaction he was hoping for, but that vocal? Primo.

Lilli Passero (Team Adam), “Town Without Pity” — Grade: A | Yes! Yes, Adam! At last, he picked a winner of a song for Lilli. Her voice is made for old-school jazzy stuff like this Gene Pitney gem, and she proved it again by shining in this rendition of the oldie-but-a-goodie more brightly than her sparkly femme fatale gown. Not only was she vocally perfect, but her performance highlighted the theatricality that, when Lilli’s really on, helps her sell a song to the moon and back. Bra-vo! 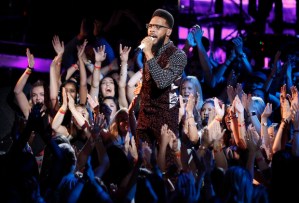 TSoul (Team Blake), “Lay Me Down” — Grade: A- | During rehearsal, TSoul told his coach that the stage was like home to him. And once he was on it, he certainly looked and sounded comfortable, lying down at one point and working a falsetto that would have to impress even Sam Smith. Besides showcasing TSoul’s rich voice, the performance also demonstrated that he has the kind of stage presence that we rarely see from younger, greener contestants.

Hunter Plake (Team Gwen), “All I Want” — Grade: A- | I agree with your usual post-recap comments — it wouldn’t kill Hunter to enunciate occasionally. (Or maybe it would — can you sing that emotionally and pronounce words comprehensibly?) But putting that matter off to the side for the moment, you have to admit that his vocal on the Kodaline cover was pretty spectacular, passionate and polished. He can work on his diction later.

Vanessa Ferguson (Team Alicia), “Diamonds” — Grade: C+ | Going into this performance, I had high hopes — it seemed like the Rihanna hit was going to suit Vanessa beautifully, and at a time when she’d really hit her stride in the contest. But the band was still overpowering her at the halfway point, and she only really took control and broke through toward the very end. By then, it felt a little too late.

Lauren Duski (Team Blake), “Somewhere in My Broken Heart” — Grade: A- | Another solid song selection. The Billy Dean ballad played beautifully to Lauren’s strengths, allowing her to easily bring out the heartache that seems so much a part of her voice that I half-expect her to sound sad when she says hello in real life. Whether she wins or loses The Voice, I can’t imagine these performances won’t get her a record deal. 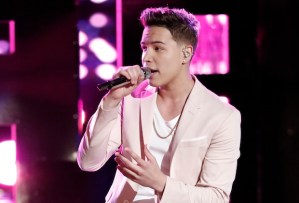 Mark Isaiah (Team Adam), “How to Love” — Grade: C | Well, this was no home run in the song-selection department, but it also wasn’t a strike-out. Mark did a good job navigating the tricky-as-hell melody. But his vocal never altogether gelled. I mean, it can’t be a good thing when you have Gwen Stefani saying you did well because you remembered all the words. If that isn’t damning a singer with faint praise, what is?

Jesse Larson (Team Adam), “Human” — Grade: A- | If this is what it sounds like when Jesse steps out of his comfort zone, he should do it a lot more often. He didn’t just sound terrific on the Rag’n’Bone Man hit, he sounded like somebody whose album I — most of us? all of us? — would buy, then mix into playlists next to Hozier songs.

Brennley Brown (Team Gwen), “River” — Grade: A | Brennley sang her countrified version of the Joni Mitchell classic with such clarity, such purity of voice that, honestly, it kinda felt too good for a TV singing contest. What’s more, unlike fellow youngsters Aliyah and Mark, Brennley never looks like a little kid lost on a big stage; she looks like she knows exactly what she’s doing. Maybe we could get her to work with Hunter on his enunciation? (Hers is Eliza Doolittle-perfect.)

Chris Blue (Team Alicia), “When a Man Loves a Woman” — Grade: A | Jeez, the second I heard Chris was doing the Percy Sledge mega-hit, I was like, “Whoa. OK, he is going to kill that.” Alicia predicted it was going to be his “statement performance.” And that statement was (as if we didn’t already know): He is a star and a half. Not only does he have the biggest voice in the competition, but he manages to sound at once completely in control and completely unhinged. Awesome.

So, what did you think of the Top 11? Vote for the best performance below, then hit the comments.