Beauty and the beast.

That’s the scene inside one of the Vancouver area’s myriad empty warehouse spaces, as The Flash‘s Killer Frost takes a clandestine meeting with Savitar. As the tense confab draws to a close, the hulking speed god leans in toward his new ally to make clear her mission in three growled words — one of which is kill.

With stakes so dire, will Barry, Cisco and kindly Caitlin Snow’s other Team Flash mates be willing to do what it takes to ice her evil alter ego? In the name of eliminating any obstacles to stopping Iris’ imminent death? That weighty matter looms as the CW hit continues Season 3 this Tuesday at 8/7c.

Having just returned from his trip to the year 2024, “Barry is devastated to find out that Killer Frost helped Savitar. And now he’s back, and it’s happening for real,” Grant Gustin says of the unexpected alliance. “It looks like she’s helping Savitar, so this is another step in the future actually coming true.” Step 1 for Team Flash, therefore, “is making sure there’s no team-up here and they get their friend back.”

Caitlin, though, appears to be well beyond the pep talk stage that previously pulled her off the Killer Frost ledge. “That worked once; I’m not sure it’ll work again,” says Carlos Valdes, who plays Cisco. “We might have to resort to some more desperate measures.” 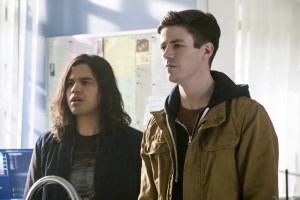 over how desperate those measures should get stirs friction among Team Flash, especially as Cisco grapples with his role as the one most likely to vanquish Caitlin’s cold-hearted alter.

“Today I’m doing a scene with the beautiful Tom Felton, who makes it very difficult for me to stay focused on the scene because of how gorgeous he is…,” Valdes quipped during TVLine’s visit to the set, in the wake of an extremely intense scene where Cisco and Julian engaged in a war of words. “They reach a bit of a rift, because Cisco carries these reservations with him as of late about his powers. This is his worst nightmare, because the last thing he wants to do is hurt Caitlin.”

Felton in turn frames the row thusly: “Killer Frost is on the rampage, and Cisco and I are falling out slightly over the best manner in which to try and get her back. She’s full-blown nutter, so we have to rely on some pretty severe methods to try and stop her.”

Emblematic of what a piece of work she is, Killer Frost knows — and takes advantage — of the inner torment she is causing Cisco et al. “Knowing that that person is still physically their Caitlin Snow, they do want to save her,” Danielle Panabaker points out. “But I think that gives Killer Frost an upper hand, because she knows that they won’t kill her. Or she’s at least gambling on the fact that they won’t.” 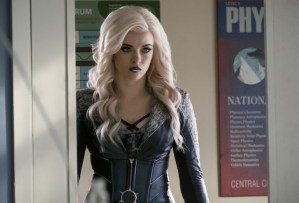 One recurring question as pertains to Killer Frost is: Why do Caitlin’s post-Flashpoint powers, when unbridled, steer her toward evil? When that isn’t the case with most anyone else?

“I had a lot of conversations with the writers, particularly around Episode 7 [‘Killer Frost’], which was Kevin Smith’s episode,” Panabaker answers, “and the way that this has been explained to me is that it’s almost like there’s this dark person inside of her who’s itching to get let out. It’s like an addict, almost, this person who craves the malice and the harm that she can do to people. Caitlin, with the help of the necklace and the cuffs, was able to keep that in check, but now the Killer Frost inside her has become a too strong and too powerful.”

Even so, Killer Frost will contend with her own moral conundrum as she and Team Flash clash over their opposing agendas. “It’s a real test of Killer Frost’s abilities, her devotion, and how badly she wants to be a part of the dark side,” Panabaker says, “as they sort of duke it out.”

“It’s going to be a much more difficult battle this time,” she makes clear, “to see if good can triumph over evil.”

Speaking of eeevil: Killer Frost has been made privy to who is nestled inside Savitar’s Transformers-like armor, and it appears that Barry is next to have the baddie’s identity confirmed. Might super-savvy fans have already guessed right?

“It’s actually not the same as past reveals in other seasons, where the audience kind of starts to have a feeling first,” Gustin said during our early-March talk. “It’s more of a jarring reveal, and it happens kind of suddenly for everyone at the same time.”