The following contains spoilers from this Monday’s episode of Supergirl.

This week on The CW’s Supergirl, 40 minutes of anxiety built up to three little, yet momentous, words, as DEO agent Alex Danvers and NCPD detective Maggie Sawyer mutually declared their love for one another, after the former narrowly dodged death.

“I love you, Maggie Sawyer.”

“I love you, Alex Danvers.”

“I kept asking when this was going to happen,” Chyler Leigh, who plays Alex, shared with TVLine during our recent set visit, “and [showrunner] Andrew [Kreisberg] was like, ‘Oh, we’ll see. We’ll see.’ And then of course this is how it happens.

“It’s a pretty big next step for them,” Leigh continued. On the heels of Alex’s kidnapping, “You have moments of, ‘You don’t know what you’ve got until it’s gone,’ but at the same time, they hadn’t gotten this vulnerable with each other quite yet.”

Floriana Lima — who previously teased the ILYs as “a pivotal moment” awaiting the girlfriends — went on to say, “Throughout this season, we’re showing a relationship blossom. Not only did Alex come out, and there’s a lot of emotion in that, but there are so many ups and downs in a relationship, right? And in this episode, a very sweet, loving connection has been developed.”

Leigh referred back to the Nov. 28 episode, where Maggie requited a newly out Alex’s feelings by saying, “We should kiss the girls that we want to kiss” — after which the two indeed locked lips. “There was that moment of, like, life is too short, and you just really don’t know,” she remembered. “That’s one thing that I always kind of laugh at with the show — because you literally could die at any moment, at any moment — but there really is no time for BS. You’ve just got to live.”

The icing on the cake for Leigh? “I love the fact that Alex says [‘I love you’] first,” she said with a warm smile. “I think that’s really cool.” 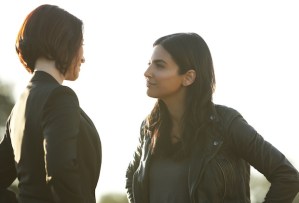 All told, what has been most important to the actresses in playing out the Alex/Maggie (aka “Sanvers”) storyline, which this year earned a GLAAD Media Award nomination?

“The GLAAD nomination was just so amazing, and wow, surreal for us,” Lima shared. “I think what’s important is just to show this as a relationship and not to focus fully on the fact that these are two gay women. We want to treat it and give it as much thought as any other relationship, right, but also be mindful that we are representing a community that needs more representation. We want to get it right, and we want to really think things through.”

Especially since every LGBTQ story told on TV, on film… in any forum… stands the chance to make life even a tiny bit easier for those who are targeted by bigotry. Take the well-reported story of Dened Rey, a queer screenwriter who during a January plane flight was lambasted by the man seated next to her for exposing passengers to the Alex/Maggie scenes she was watching on her laptop computer — a “gay abomination,” as he put it.

Weeks later, toward the end of a long stretch of filming outside on location, Lima and Leigh went over to greet a group of young women who had been looking on for hours. “It was the sweetest thing. They just went bananas,” 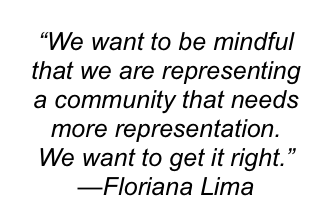 Leigh recalled. “We went and hugged every single girl — and one of them was [Dened].”

Lima said they have experienced “so many” stories like Rey’s. Even on the day TVLine was on set, she had read and been “very moved” by the letters sent by some.

That reciprocity — meaningfully telling an LGBTQ story, and seeing incontrovertible examples of its value — is perhaps the greatest, if slightly unanticipated, reward that Leigh and Lima have taken from this experience.

“These are people that are as invested in us as we are in them,” Leigh remarked. “It’s cool to see those connections and know firsthand that [this storyline] is genuinely doing something profound.”