When last we tuned into Fox’s Lucifer, the titular rapscallion had “walked away from Chloe, leaving her with no idea what was going on” — and right after he had helped her cheat death, showrunner Joe Henderson reminds. Unbeknownst to Detective Decker, of course, her partner in crimesolving “was dealing with the emotional repercussions of finding out that she was put in his path for a reason.”

As such, when Lucifer returns to town tonight at 9/8c, he is not met by looks of “happy to see me.” Especially considering the bit of Candy he has on his arm (played by Impastor‘s Lindsey Gort). 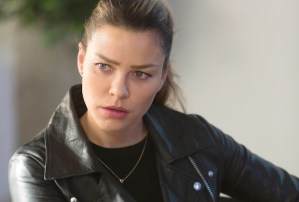 comes back, he has made a very big decision on how he is going to deal with Mom and Chloe, and it’s a decision that’s going to make neither of them happy,” Henderson previews. “But it’s also something Lucifer feels like he needs to do.”

But fear not, it’s far from all angst and animus as the Fox drama returns from its long break. Whereas the midseason finale had “so much emotional gravity,” this week’s episode “is oddly a very fun one,” Henderson promises, “even though we’re dealing with all of these emotions of heartbreak and dealing with a mother who has manipulated you all the time.”

Among Lucifer’s kinfolk, Charlotte has been “desperately afraid that her entire plan blew up in her face, that she broke her son,” Henderson says. But when he resurfaces seemingly right as rain, “That immediately makes Mom suspicious, so her first thought is that he is up to something — and she is dead-set on figuring out what.” For brother Amenadiel, meanwhile, “The big arc of these [final] five episodes is trying to decide where he ultimately stands. Is he on God’s side, is he on Mom’s side? 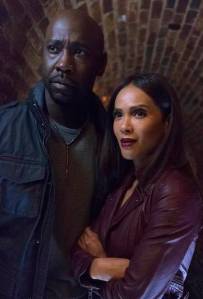 Or is there just an Amenadiel side? Can he ultimately just decide what’s best for him in the long run?”

As the series’ (truncated) sophomore run marches on, the May 8 episode will take a look at the Lucifer/Trixie and Chloe/Maze relationships, while the subsequent hour introduces Timothy Omundson (Psych) as a psych patient/murder suspect who is legally named God Johnson and “appears to know more than he should”

“He claims to be God, and Lucifer doesn’t quite believe him,” shares the EP. “But as they go on he starts to realize, ‘Maybe this is my dad, and if so, what do I do about that?” (A perhaps more provocative question is: What happens if Charlotte was to reunite with her ex? As that bit of fun plays out, Henderson promises “incredible chemistry” between Tricia Helfer and Omundson).

As one might imagine, Dr. Linda (Rachael Harris) perhaps has the biggest reaction to the idea of meeting, you know, Him. And that, in fact, sets up one of Henderson’s “favorite moments.”

Closing out sweeps on May 22, Henderson says, “We sort of play with mismatched pairings” — including Chloe and Charlotte working a case, “some cool stuff” for Amenadiel and Dan, and… longtime associates Lucifer and Maze?

“Intentionally, they’ve been barely together every episode,” Henderson notes. And the season’s penultimate hour “is where all of Maze’s season arc comes to a head. She’s been on the outside of a lot of what Lucifer’s been doing this entire season, and in particular these last few episodes, so when she finds out what he’s up to, she’s pissed.”