Jimmy Kimmel dropped the smart-aleck act on Monday, opening up about his newborn son’s serious health scare in a powerfully touching monologue.

The host of ABC’s Jimmy Kimmel Live was clearly emotional from the start of Monday’s monologue, which you can watch above; his voice was quaking from his very first words. Kimmel’s wife Molly just gave birth to their second child on April 21, a baby boy named Billy. But, as a choked-up Kimmel explained, Billy was diagnosed with a rare heart disease and had to undergo a harrowing round of open-heart surgery right after being born. 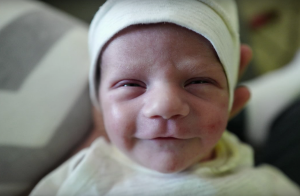 There’s a happy ending, though: Billy’s surgery went great, and he was able to leave the hospital and come home with his family this past weekend. Kimmel was even able to joke about the ordeal, sharing a picture of the baby boy: “Poor kid… not only did he get a bad heart, he got my face.”

Kimmel thanked all the doctors and nurses at Cedars-Sinai and Children’s Hospital Los Angeles, and his family and friends for their support: “Even that son of a bitch Matt Damon sent flowers.” He also took a pointed swipe at President Trump for trying to repeal Obamacare, which covers pre-existing conditions like his son’s heart disease: “No parent should ever have to decide if they can afford to save their child’s life… it just shouldn’t happen.”

Understandably, Kimmel is taking the rest of this week off for paternity leave, so a number of guest hosts will step in to host Jimmy Kimmel Live in his absence: Will Arnett (Tuesday), Anthony Anderson (Wednesday), Kristen Bell (Thursday) and David Spade (Friday).

Press PLAY on the video above to watch Kimmel’s monologue, and then hit the comments with your thoughts — and your well wishes for Jimmy and his family.