Dancing With the Stars welcomed its seventh week of competition with double trouble — and not just because the cast of Descendants 2 appeared for an odd, lip-synced interlude. (Seriously, why even try to fool us with those headset microphones?)

The ABC series also delivered a double elimination on Monday, and in the wake of Heather Morris’ premature goodbye, all of the remaining contestants seemed a bit rattled on the dance floor.

Before revealing the results, let’s rank each of the Hollywood Night performances:

7. Bonner Bolton and pro Sharna Burgess (Western/Paso Doble) — Every week, I cross my fingers that Bonner will return to his Week 2 ways and turn in a dance as technically proficient as it is captivating to watch. But in recent weeks, the pro bull rider has actually seemed to slide backwards. Monday’s paso doble, in particular, did him no favors; since he performed first (and didn’t actually dance for the first 20 seconds or so), Bonner and Sharna’s routine became the evening’s most forgettable. Judges’ Score: 29/40

6. David Ross and pro Lindsay Arnold (Sci-Fi/Salsa) — It’s been a few seasons since a Dancing contestant has actually made me nervous when he or she hits the floor. But coming off last week’s wobbly lifts, David once again fell out of step with Lindsay more than once during his salsa — and every time Lindsay’s feet left the ground, I found myself holding my breath until it was over. While the former MLBer began Season 24 as a pleasant surprise, the competition’s rigorous schedule might just be pushing David’s stamina. Judges’ Score: 32/40

5. Nick Viall and pro Peta Murgatroyd (Action/Argentine Tango) — Don’t get me wrong; now that Nick has appeared on four total seasons of ABC’s Bachelor/Bachelorette/Bachelor in Paradise cesspool, I’m as tired of seeing him on camera as the rest of America seems to be. But a part of me wishes this season of Dancing could go a few weeks longer, if only because the former reality show suitor has so much potential. Every week, he skirts around having one of the evening’s best performances — and every week, just like this Monday, he falls just shy. Judges’ Score: 34/40

4. Rashad Jennings and pro Emma Slater (Horror/Paso Doble) — When a paso doble gets too intense, it tends to verge on unintentionally funny — and given Rashad’s commitment to the horror-film vibe of his performance, he occasionally veered into comical territory. (Those eyes!) But on the whole, the pro footballer was a strong, solid partner for Emma, and his dedication to actually playing a character during each dance is majorly commendable. Judges’ Score: 37/40 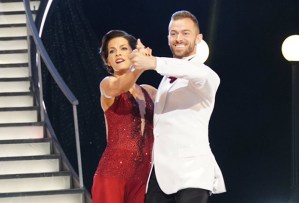 3. Nancy Kerrigan and pro Artem Chigvintsev (Romantic Comedy/Tango) — Nancy had the misfortune of performing early in the broadcast, causing her rom-com-inspired routine to get a bit lost among more exciting dances. But as she tangoed her way across the ballroom’s fake hotel lobby, Nancy brought a certain charm and ease to her movements that was impossible to ignore. Judges’ Score: 36/40

2. Simone Biles and pro Sasha Farber (Silent Film/Charleston) — With only a few weeks left in the season, I’m still waiting for Simone to really enjoy her performances, rather than simply act like she’s enjoying them. Even during this massively fun Charleston, Simone’s face seemed to say, “This is how people look when they’re having a good time dancing, right?” But facial expressions aside, Simone still matched Sasha step for fast-paced step, and it was a thrill to watch her nail the gymnastics that Sasha integrated into the performance. Judges’ Score: 37/40

1. Normani Kordei and pro Val Chmerkovskiy (Foreign Films/Argentine Tango) — Given Heather Morris’ untimely elimination, it’s clear that no one should get too comfortable on the ballroom floor. But for the seventh consecutive week, the Fifth Harmony singer has proven she’s worthy of the Mirrorball, this time pulling off an Argentine tango — back injury and all! — that was effortlessly sexy and featured the night’s sharpest legwork. Judges’ Score: 40/40 (and immunity!)

Meanwhile, the six couples who didn’t receive immunity entered the dreaded dance-off, in which two pairs dance simultaneously to the same song, while viewers at home vote for their favorite duo in real time (and the judges pick a winner, too). In the end, Simone bested Nancy in the cha-cha; Rashad bested David in the jive; and Bonner bested Nick in the rumba.

Your turn! Did Nancy and Nick deserve to be sent home? Hit the comments section with all of your thoughts on Monday’s episode.