At the close of this week’s Once Upon a Time, a new promo for the musical episode — titled “The Song in Your Heart” and airing next Sunday, May 7 — let slip a few bars from multiple performances. 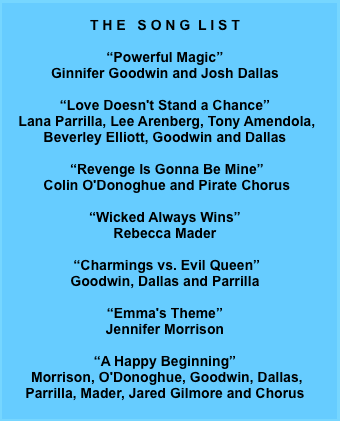 the “Wish upon a star…” origin of the unwittingly cast spell that sets the stage for the singing, the promo shows the Evil Queen’s sexy shimmying, a bit of a duet between Snow and David and Hook’s boisterous number aboard the Jolly Roger.

Lastly, playing over the glimpse of Emma and Hook at the wedding altar, we get a few notes from the highly entertaining group number that gave me an earworm for days after being on set for the filming.

If you missed it, here’s an in-depth preview of the musical episode, for which I talked on set with Jennifer Morrsion and Colin O’Donoghue, Ginny Goodwin and Josh Dallas, Lana Parrilla, Rebecca Mader and Jared Gilmore. Coming this week, I’ll also have Morrison and O’Donoghue talking up Emma and Hook’s big day — including the threat hinted at the close of this Sunday’s episode (which I need to now go recap!)