The frighteningly frigid temperature of the show’s New York studio (almost balmy compared to how Letterman famously kept his Late Show digs) was but one of the discoveries made during TVLine’s (long-ago, pre-election) visit to the taping of what would be tonight’s episode, airing at 9/8c on ABC.

Having watched Match Game‘s many incarnations over the decades, I arrived with some non-fill-in-the-blank questions of my own, especially with regards to the modern, Alec Baldwin-hosted reboot. Including:

WHAT EXACTLY TRIGGERS THE ‘ANSWER READY’ LIGHT? | A panelist’s name lights up once they slide their answer card into the slot in front of them, but what is causing that reaction? Is there an actual physical lever that the card pushes? In this day and age, is it an optical sensor? Or is there simply a Teamster off stage who mashes an “on” button once he sees a celeb insert their card? (As you can tell, I was a bit fixated on this one.) The answer: “There’s a little, tiny slight switch in there, like when you open a closet door,” supermodel Christie Brinkley confirmed. “It’s that type of thing.”

And as sitcom vet Wendie Malick pointed out, panelists of a certain age have reason to answer early: “The ladies are incentivized because you get an immediate ‘key light'” from below, filling in creases and wrinkles. “Years are taken off our faces as soon as we have an answer!” 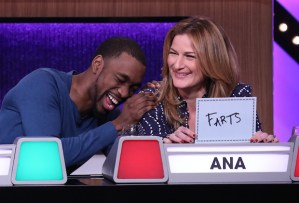 REAL? | “Oh, they’re real. They’re definitely real,” Glee grad-turned-bestselling author Chris Colfer attested. “I wasn’t expecting to have a full bar when I walked in!” In fact, “It’s a gorgeous bar,” Ana Gasteyer (People of Earth) shared, “and a good-looking bartender, which I think everybody appreciates. It’s like Andy Cohen’s [Watch What Happens Live] clubhouse; he’s always got a hot bartender.”

At the green room filling station, “They have pretty much anything you want,” Malick said. “And they encourage you to drink, heavily. That’s the secret to this show’s success.” To further help ensure that success, some “pre-gaming” even goes on. “Match Game is all about showing people having a good time together,” Malick noted, “so they got us all in a room together for an hour, hanging out and having cocktails, at about 2:30 in the afternoon! You tend to bond heavily, and quickly.” 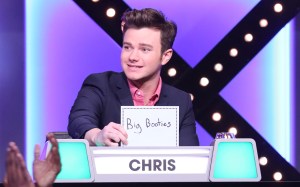 CAN THE CELEBS GET? | As Brinkley observed, “body parts, and body functions” are Match Game‘s bread-and-butter when it comes to filling in those blanks. And in doing so, “apparently there’s nothing” you can’t write down, Gasteyer reckoned. “I think they would love not to see an actual drawing of c–k and balls,” she says, “but they encourage you to say both words all the time.” Colfer confessed that despite penning an entire YA book series, he was more concerned about how he wrote things versus what he wrote. “I was just hoping I would spell everything correctly!” he laughed. “I’m a a very nervous speller. I can spell for s–t.”

WHO WAS MOST AND LEAST FAMILIAR WITH MATCH GAME? | Brinkley (more of a Hollywood Squares and Password fan) actually copped to not being well-acquainted with Match Game‘s rules, while Colfer — this episode’s youngest panelist — very much was. “When I was home sick, 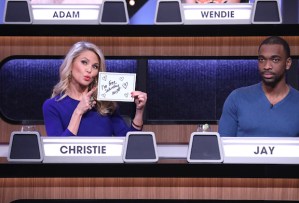 I’d watch all the reruns on GSN,” he explained.

WHAT ABOUT THE EXPERIENCE MOST SURPRISED THE CELEBS? | “How funny Christie Brinkley is!” raved Malick. Brinkley herself answered, “How they kept the drinks refreshed!” Gasteyer meanwhile had to give props to the show’s spot-on recreation of Match Game sets gone by: “Here’s what I appreciate: shag carpeting. The [logo] font. Wood paneling. And the theme song. What they’re doing here is not just an homage.”