This post contains spoilers for the Season 3 finale of American Crime.

For the second consecutive year, American Crime spent the final moments of its season in a tense courtroom — but unlike Season 2, which left viewers with two major cliffhangers, Sunday’s Season 3 finale offered the audience much more closure.

Before you tell us your thoughts on the season (and possibly series) ender, let’s recap the fate of each character — most of whom were left with no choice but to take responsibility for their harmful actions of the last seven weeks.

CLAIRE AND NICHOLAS | When we get our first glimpse of Gabrielle, she’s in the hospital, looking even more miserable than she did during her stay with Claire and Nicholas. She’s exhausted, dehydrated and forced to take medicine she’s sure she doesn’t need.

But in an incredibly quick succession of events, the truth about Gabrielle’s abuse is revealed: Claire is called in for additional questioning about Gabrielle’s bruises, and the detective informs her that some of the nanny’s bruises were on her back — an odd place for someone to hurt themself. Though Claire tries to talk her way out of the situation, assuring the man that Gabrielle was simply struggling without a family of her own to confide in, the detective presents Claire with a letter that Gabrielle wrote to her son — a letter that did, in fact, make its way through the postal system, and seems to detail the abuse that Claire was inflicting on Gabrielle the whole time.

Though Nicholas tries to find a way around the problem, ensuring that Claire’s legal drama can be brushed under the rug, Claire is adamant about taking responsibility for what she did — and, while she’s at it, she makes sure Nicholas understands that he abused her for many years, too. “Sure, you didn’t touch me,” she tells him. “But don’t think you didn’t hurt me.” 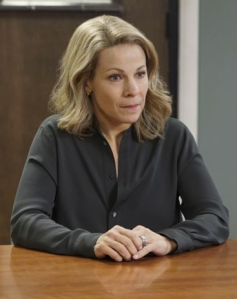 KIMARA | While casually browsing vacation spots on her laptop, Kimara receives a call from Dustin, Shae’s friend at the webcam house. There’s clearly something on his mind, but he won’t talk, much to Kimara’s exasperation. It isn’t until later, when Dustin finds himself at the bus station with nowhere to go, that he dials his case worker’s number once more and asks for her help, before going to the police and answering questions about the house where he lived.

It’s during his conversation with the authorities that Dustin reveals Shae was killed at the house — and Kimara, after getting confirmation that the victim was, in fact, a pregnant blonde, is devastated to learn what happened to her former client. She pays a visit to the morgue to see Shae’s body — a visual that you will almost certainly see in our year-end Things We Can’t Unsee gallery, given how devastatingly stomach-turning it is — but when she meets up with Dustin in the hallway, he’s arrested for being an accessory, after the fact, to Shae’s murder.

It’s this injustice that drives Kimara away from the work she’s currently doing, telling the district attorney to “go f—k yourself” after the woman insists it’s a good thing that Dustin would only get a year in jail. Instead, Kimara returns to the offer presented by Abby (Sandra Oh) just weeks ago, confirming with Abby that she wants to work for her. She doesn’t care about the fraud, or any shady under-the-table specifics. Kimara just wants a job that fits her needs — more specifically, $15,000 more per year than she was making at her last gig. We don’t exactly see Kimara and Abby shake on it, but we do later see Kimara paying another visit to the fertility clinic, where she assures the doctor she won’t need to set up a payment plan. “I think I’ve got things all worked out,” she says with a smile.

JEANETTE | With Raelyn back in jail after failing her drug test, Jeanette returns to her husband and informs him they’ll need to get custody of Raelyn’s girls. “I’m not as strong as I thought,” Jeanette admits, attempting to assure Carson that if she comes back and resumes their marriage, things will go back to exactly how they were before the separation. Carson, of course, isn’t buying it.

Neither is Laurie Ann, for that matter. When Carson pays his sister a visit, asking her for help with the financial burden that comes with housing two nieces, Laurie Ann refuses to let her brother or sister-in-law off the hook for the pain they’ve caused the Hesby family. Jeanette, for her part, must now meet with crowds of farm workers and assure them that the Hesbys really do feel just terrible about the fire that broke out. “I have never been more proud to be a part of this family,” Jeanette lies to the workers, barely getting the words out herself.

In the episode’s final minutes, all of these stories reach the same end: the courtroom. Jeanette and the Hesbys stand behind J.D. as he prepares to plead guilty to the crime on the farm. Raelyn, ready to face the punishment for her parole violation, looks back longingly at her two daughters. Claire takes a seat across the aisle from Gabrielle, guiltily glancing over at her onetime nanny. Dustin, standing reluctantly beside Kimara, adjusts his tie before standing in front of a judge.

And when the crowd in the courtroom takes a seat, following the judge’s opening remarks, Shae, Isaac and Teo — or their spirits, at least — are watching it all unfold from the back of the room.

With that, I hand it over to you. How did you feel about American Crime‘s season ender? Would you be content with the series ending here? Grade the finale in our poll below, then hit the comments with your thoughts!