Two wildly different scenes were unfolding during TVLine’s recent visit to the set of The CW’s Supergirl.

Upon our arrival, you heard orders being barked throughout the DEO, as frantic agents swung into crisis mode. A half-hour later, the scene at hand was much quieter, the words being spoken much… warmer. The calm after a perilous storm?

In the episode being filmed — airing this Monday at 8/7c — one of the DEO’s human heroes is blindsided by a blast from the past, setting the stage for a well-meaning but at-times tense team-up.

“This episode is called ‘Alex,’ and there’s a guy who comes back from Alex and Kara’s past,” Chyler Leigh shared with TVLine in between scenes. “In the [Supergirl] pilot, you saw a young Kara miraculously save a girl from car. Well, this one guy saw her do it, and knowing that she had these powers, he figured out that Kara is Supergirl.”

Seeing an opportunity, this man puts in motion a “big, elaborate setup” that targets Alex and compels Supergirl to spring a dangerous individual from prison. When Alex goes missing during this ordeal, it will take the combined efforts of two of the people closest to her to hopefully save the day.

“Maggie and Kara have to team up to try to figure out what’s happened to me, and that sets up a lot of interesting conversations between the two ladies,” Leigh previews. “It’s almost like a peeing contest, you know what I mean? Like, ‘Who can do this better? Who knows Alex better?’ And it comes to a head at one point.”

As Melissa Benoist puts it, “[Kara and Maggie] are both women who are very strong and opinionated and stubborn, and they very much have their own way of figuring out a problem.” So as they join forces, “They don’t necessarily agree on how to deal with the fact that the person that’s the most important to both of them is missing and in danger.” 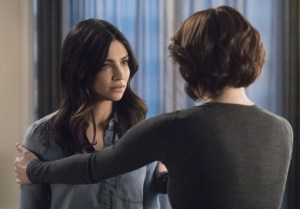 Representing Alex’s first-time love and longtime sister, Maggie and Kara “both have such strong feelings for Alex,” affirms Floriana Lima, who plays the NCPD detective. “And yeah, they’re both strong, opinionated women who really are passionate about their work, so they’re going to butt heads a bit — but not in any aggressive, bad way.”

Instead, Lima says the conflict is more along the lines of, “‘I want to go this way,’ and Kara, Supergirl, wants to go another route. And we’re both telling each other, like, ‘No, that’s not the safest plan.’ We both think we know Alex more than the other.”

That said, this bit of “quality time” together does allow for some bonding between Kara and Maggie, who ever since the latter started dating the former’s sister — and amid all the drama that’s been going on in National City! — haven’t had much of a chance to really know each other.

“That’s inevitable,” says Benoist. “When you feel like you could lose someone that important to you, the woman she loves and the sister that she’s always had, it’s impossible not to feel closer after an ordeal like that.”

Alex, meanwhile, is no submissive captive. Far from it. Rather, she will bust out some moves of her own in the name of trying to save her bacon. In one instance, she uses a credit card to perform some ersatz surgery (“It’s pretty badass, I’m not going to lie,” Leigh says with a wink), while in another she employs a Navy SEAL trick to contend with a sink-or-swim situation.

The DEO, too, is doing its own part to resolve this crisis. While Hank/J’onn Jonnz attempts to pull off one of his shapeshifter tricks to get a bead on the baddie’s whereabouts, Winn “is in full nerd-out, hacking-and-scanning records, finding-the-bad-guy kind of mode,” says Jeremy Jordan, the aforementioned barker of orders. “He’s doing his Tech Guy on Crack kind of thing.”

If it all sounds like a super amount of angst for those (viewers included) who love and care for Alex Danvers — “There are a lot of ups and downs, a lot of close calls,” Lima warns — make no mistake, it is. But as a reward for sticking through it all, Lima teases “a moment” awaiting Maggie and Alex, once the dust settles. “A pivotal moment,” at that.

COMING MONDAY NIGHT: Chyler Leigh and Floriana Lima react to the Sanvers “moment” and discuss the importance of getting an LGBTQ story right.