This week’s Mom was no laughing matter.

The CBS sitcom, which has never shied away from the harsh realities of drug and alcohol addiction, revealed that Christy — who at this point has been sober for many years — was once raped at a party while under the spell of narcotics. She was forced to relive the painful memory when her rapist — a man only identified by his cigarette brand — made his way into the group’s weekly AA meeting. Upon realizing he was there, Christy made a beeline for the nearest exit. Jill and Wendy followed her home, where she detailed the night of the assault 16 years prior.

“Back when I was drinking, I was at this party and that guy showed up with some [cocaine],” Christy recalled. “We went into a bedroom to do a few lines. The next thing I know, he was on top of me and I was too messed up to fight him off.”

Jill and Wendy then suggested that Christy report the rape, but Christy, feeling defeated, said there was nothing the authorities could do all of these years later. What’s more, she didn’t alert the police at the time of the assault because she didn’t expect them to believe an alcoholic stripper.

It wasn’t clear just how affected Christy was by seeing her rapist until the next day, when Bonnie returned home to find that her teary-eyed daughter had torn the house apart looking for a cricket that had found its way inside. Bonnie attempted to embrace her, but Christy didn’t want to be touched. Feeling helpless, Bonnie then turned to Marjorie, who earlier in the episode requested some time to herself after discovering that her sponsor of 50+ years was no longer sober. Marjorie, of course, knew that she was needed, and followed Bonnie back to Christy’s to sit down with her friend. 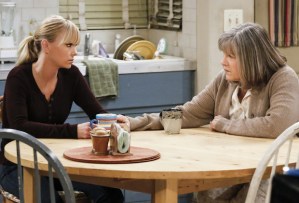 “It doesn’t matter how drunk you were. What happened wasn’t your fault,” Marjorie told Christy. Then, after dismissing the notion that the assault wouldn’t have occurred had she not been inebriated, Christy’s sponsor imparted the following words of wisdom: “Honey, it’s OK to look back at the past, just don’t stare for too long… Instead of kicking yourself for not taking action then, be grateful that you’re sober now and you have a voice.”

And with that voice, Christy went up to speak at the next AA meeting, making direct eye contact with her rapist as she finally spoke out about that horrific night.

“Mugging victims aren’t ashamed they were robbed, [so] why should I be ashamed that I was raped?” she asked. “What I am ashamed of is that I kept it a secret. This guy counted on me being too embarrassed and afraid to come forward, and you know what? He was right. And so tonight, I would like to make amends to any woman that might have been hurt because I was too scared to say anything. If my silence encouraged him to believe that he could attack, or intimidate, or even grab another woman without consequences, then I am so, so sorry.”

Before she left the podium, Christy had already scared off her rapist, who fled near the end of her impassioned catharsis.

What did you think of this week’s very special episode of Mom?