After which she probably turned her attention back to competitive bridge strategy.

TVLINE | What I found pretty adorable was that she and Ray weren’t at the tournament to hustle anyone or anything. They just wanted to play their best.
She just loves the game. It’s such a big part of her personality, that’s just the way that she thinks. It was definitely a fun character trait to play with.

TVLINE | What was your reaction when this opportunity came along? Did you follow Fargo‘s first two seasons at all?
I had. I actually had been talking to Noah [Hawley] for a couple years about possibly doing Fargo, about something with him at some point, but I was never available, so nothing ever came of most of our discussions. So when he called and asked if I was available for this I just said yes, right away. After having seen the last two seasons I knew that every character that he writes is so dimensional and exciting — particularly the female characters, which are so wonderful. I had no doubts that it was something I wanted to be a part of.

TVLINE | I always think of Kirsten Dunst’s Peggy saying, “It’s just a flying saucer Ed, we need to go!”
I know! Every character you just sort of love, even the ones who are doing bad things. I love to get the chance to play roles like that. Also, the Coen Brothers’ world is one I wanted to live in, so I was very ready to be a part of it.

TVLINE | Throughout the pilot I was looking for evidence to suggest otherwise, but at the end of the day I was convinced that Nikki truly loves Ray. For me, it all came down to her reaction to his plot to steal the stamp to buy her a ring, which resulted in murder — she’s either like, “You bungled this thing and I’m done with you!” or, “That is so romantic.” And it was the latter.
After getting the first script that my only real question for Noah, in terms of being able to move forward with this character — whether or not that love was real and genuine. And when he told me without hesitation that it was, it made it so much easier to figure out how to play her. When you can lead with a certain amount of love and warmth, it’s easier to connect to.

TVLINE | It’s refreshing to watch, and probably refreshing for you as an actress, to see a scenario where the knockout isn’t preying on the schlub.
Yes. Absolutely. I knew that even a femme fatale character in Fargo was going to be subversive and interesting and multi-layered, and I was proven right in reading for Nikki Swango.

TVLINE | Will we get any additional insight into her and Ray’s past?
It doesn’t go too much into their backstory, which I’m kind of OK with. They met [as parole officer and parolee], and in the first episode you got flashes of him seeing her in his office and all that. But once the story starts unfolding, there’s no time for backstories. You’re just in it.

TVLINE | Once the air conditioner hits the ground…
Once the s–t hits the fan, yeah, you sort of know them pretty immediately. I had a few little questions for Noah, mainly asking him if there was anything he wanted to tell me, but he really leaves it to the actors to come up with the personality and things like that.

TVLINE | He’s in an amazing groove right now. If you caught any of Legion, and the fact that he fit that among these three seasons of Fargo…
It’s unimaginable to me. It’s so beyond my mental capacity to even think about how one person could do all that. I’m totally in awe of his abilities, constantly, especially getting every script and being so surprised and shocked and excited, every single time. I don’t want to give anything away, but I would have never imagined Nikki Swango would end up where she is now, in the stuff we’re shooting [this week]. It’s all so unexpected and wonderful.

TVLINE | On a scale of 1 to 10, how well have she and Ray covered their tracks in The Great Air Conditioner Murder?
Oh gosh, I don’t know that I can put it on a scale. But in a typical Fargo way, when things go bad, they tend to just keep getting worse! [Laughs] Things go off the rails pretty quickly.

TVLINE | I couldn’t quite tell, do they live within police chief Gloria Burgle’s jurisdiction?
No, they’re actually a county over. But she (played by The Leftovers‘ Carrie Coon) becomes involved once she starts putting some pieces together about the murder of her stepfather. She certainly gets reeled into Nikki and Ray’s story. 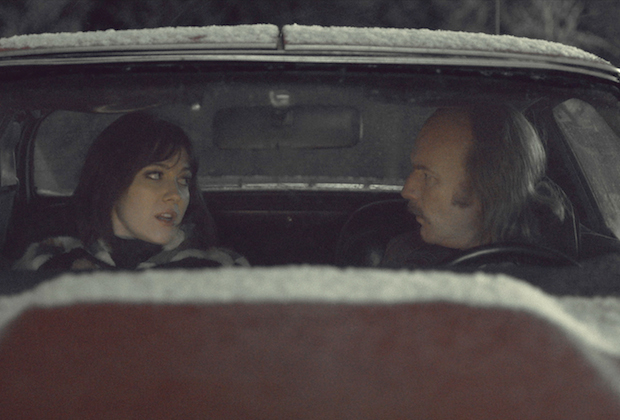 TVLINE | What does Nikki want in this world? Does she want the ring, money? Or would she be content placing second in the tri-county bridge tournament?
I think she has very big dreams for her life and her life with Ray. I don’t think she’s using him for money or any of those things, but she has this idealized version of what she thinks her life should be. I think she sees them living in a big house and they have everything that they want. Shes big on visualizing and living forward and positive thinking. She believes that as a team they’re going to win the game of life together.

TVLINE | Ewan obviously goes through quite a transformation to become Ray vs. Emmit. Was this the first time a male costar of yours took longer in hair and makeup?
I think the only other time was when I did Abraham Lincoln: Vampire Hunter, where Ben Walker went through hours of makeup to turn himself into Abe Lincoln every day. That’s the only other time I could remember feeling so bad for my male costar — but it’s such a rarity. I “feel bad” for them but I love the rare opportunity to spend a fraction of time in the hair and makeup trailer than the male costar does.

TVLINE | Once Ewan was in costume as Ray, did you sometimes have to bang out scenes from multiple episodes, in the name of efficiency? What challenges did that present you as his scene partner?
For me, it was pretty normal. I think for him it was a challenge, because sometimes he’d have to switch from Ray to Emmit halfway through the day, so he’d have two hours in makeup in the morning, and then another hour-and a half switching back… But for the most part I just experience him as Ray, so that was what he looked like. We block-shoot, like, two episodes at a time, so we dont tend to get too, too much out of sequence.

TVLINE | Will we get a Nikki/Emmit scene at some point? Where you work with the “other” Ewan?
Perhaps. Perhaps. Eventually, down the line. Perhaps.

last summer that CBS’ BrainDead gave you one of the “weirdest” scenes of your career, which turned out to be the infamous “salami sex.” Is there anything in Fargo to perhaps rival that?
As “weirdest,” I’m not sure, until I see it, because I’ve done so many weird things. But “most challenging,” yes. I’ve done some of the most challenging things I’ve ever done, on this show. And that will become apparent down the line!

Want more scoop on Fargo, or for any other show? Email InsideLine@tvline.com and your question may be answered via Matt’s Inside Line.