This week on The Flash, Barry traveled to the future to hopefully get intel on Savitar’s identity, to thus help him save Iris from certain death. What he found instead was a fractured Team Flash.

Having calculated that 2024 is a sweet spot to arrive in, seeing as Savitar is likely captured by then, Barry with an assist from Wally makes the leap in time, arriving in a dreary Central City that enjoys no crimefighting courtesy of the scarlet speedster. No, Team Flash has long been disbanded, after a distraught Barry bailed on everyone in the wake of Iris’ death. Having allied with Savitar, Killer Frost thrived and ultimately robbed Cisco of his hands; a vengeful Wally went after Savitar by himself, only to get his spine snapped; and Barry was so focused on Savitar that he neglected his promise to Iris, to take care of Joe.

Worse, our Barry can’t even get what he came for, seeing as an imprisoned Killer Frost won’t cough up the speed god’s identity, while Future Barry warns that nothing can save Iris. “You will do everything you can think of — you’ll ever create time remnants of yourself, but he’ll kill them all, mostly. On the night of May 23rd, Iris will die in your arms… and it will break you.”

When Barry, at Cisco’s urging, sticks around long enough to get the team back together — including successful romance novelist H.R. and a bearded Julian — they thwart 2024’s Top and Mirror Master. Future Barry then gives his younger self the only bit of help he can: the name of a physicist, Tracy Brand (to be played by House‘s Anne Dudek), who four years after Iris dies will develop technology that allows Barry to trap Savitar in the Speed Force forever. Future Barry hands our Barry a thumb drive which perhaps will inspire Tracy Brand to decipher the tech sooner.

Barry returns back home and reports on some of what he witnessed, including Caitlin’s unfortunate fate and alliance with Savitar. He also makes a point to give Joe a warm hug and “I love you,” assuring him that he will always be there, no matter what happens. 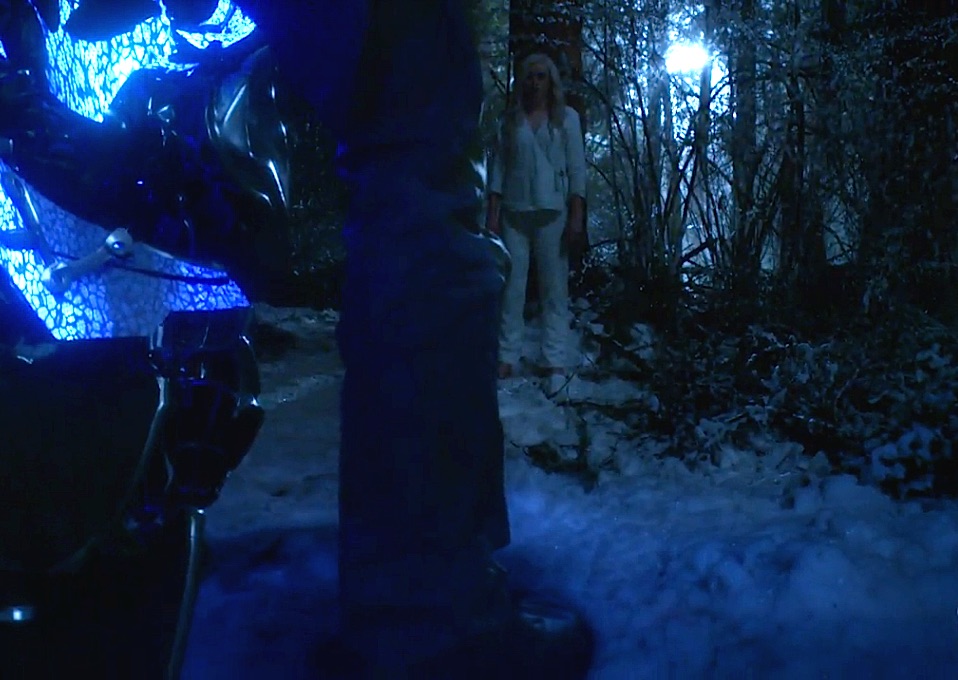 after making mayhem at S.T.A.R. Labs earlier, a wandering, barefoot Killer Frost is discovered in the woods by Savitar, who has waited for this moment. He promises to give her what she needs, to ensure that Caitlin will never return. “Why should I trust you?” the ice queen asks. Savitar then, Transformer-like, hunches over and his armor unfolds, allowing the person inside to step out.

Laying eyes on his true self, a suddenly acquiescent Killer Frost asks, “What do you need me to do?” — setting the stage for the next episode, which I was on set for last month.

What did you think of “The Once and Future Flash”?