Agents of S.H.I.E.L.D. this week revealed details about Dr. Fitz’s ominous Project Looking Glass, which ultimately — and perhaps imminently — will serve Aida’s plan to fashion herself a skin-and-blood vessel with which to live on, in our world.

But couldn’t the same technology — whether or not Aida herself ever gets to make use of it — also afford the Framework’s kinder, gentler Grant Ward passage to the “other” side, to stay with Skye aka Daisy?

That might be something Grant, and even Daisy herself, is interested in, given the warm-ish moments they shared this week, reunited at the S.H.I.E.L.D. bunker thanks to May bailing on Hydra and activating Daisy’s Inhuman abilities. After all, this Ward does regret being a murderous, treasonous monster in the real world, and Daisy did say she sees in him the potential for what her onetime beau could have been. Besides, you know, a murderous, treasonous monster. 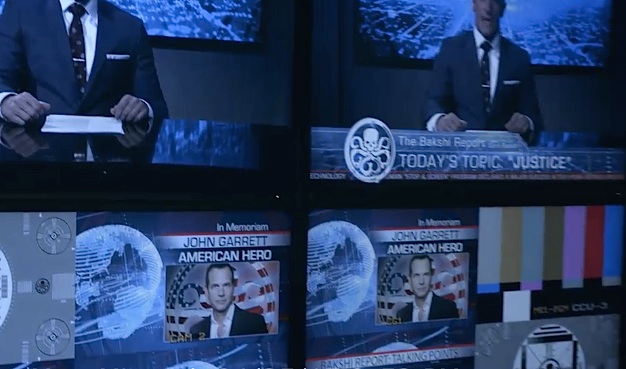 a snippet of Sunil Bakshi’s Fox News-style program there in the Framework revealed a small, quiet “In Memoriam” tribute to “American Hero” John Garrett, who back in Season 1 of course was played by the recently passed-on Bill Paxton.

In the course of escaping the triskelion (thanks to May’s betrayal and acrobatic gunplay), Daisy quaked Madam Hydra through a high-story window, onto the pavement far below. Ophelia would barely sustain that fall, suffering extreme damage to her body. That, and her words, lit a fire under Dr. Fitz, who forged ahead with Project Looking Glass, while his father Alistair attempted to get Radcliffe to disclose Daisy and May’s possible destination. Radcliffe, though, was ready to die, and instead used his words to taunt Alistair about his “real” existence, as a worthless drunk who abandoned his son.

After Daisy and May just barely eluded capture by Hydra thugs, they delivered to S.H.I.E.L.D. May’s body cam footage of the HECC’s destruction, which they then broadcast over Bashki’s commandeered airwaves. (Anyone catch the Hydra propogandist unsuccessfully flirting with a pretty staffer, offering to take her furniture shopping?) The response they got to schoolteacher-turned-S.H.I.E.L.D. agent Phil Coulson’s cool and cool correction of “alternative facts” was not Hydra agents storming the station’s doors, but civilians wanting to help the cause.

Meanwhile back in our world, Aida assured Anton Ivanov that once the Looking Glass machine is complete and she has assumed her new form, he too will be free of the “no kill” parameters, and thus can run a knife into Coulson’s unsuspecting body.

What did you think of the episode “All The Madame’s Men”?