Going into The Voice’s Top 12 performance night — with Shania Twain trying on for size a fifth chair — Team Alicia’s Chris Blue looked — and, more importantly, sounded — like a lock to win Season 12. (I can’t be the only one still playing his version of Riri’s “Love On the Brain” on a loop, right? If it was vinyl, I’d have worn out three needles on it by now.) Was the retro-soul showman able to bring down the house once again Monday? Or did his star fade just enough for him to be outshone by a less flashy singer? Read on…

Mark Isaiah (Team Adam), “One Dance” — Grade: C- | Covering Drake, the charismatic teen wanted to demonstrate his R&B bonafides but wound up being kinda drowned out by the band and, when he wasn’t, too often sounded more like he was about to win his high school’s talent show than The Voice. And can we talk about his moves? No, because we are nice people, we cannot. “Honest to God,” Adam said after the performance, “I’m blown away right now.” “Pants on fire,” I replied.

Stephanie Rice (Team Alicia), “White Flag” — Grade: C+ | In rehearsals, Stephanie said that she wanted to make her version of the Dido hit the most haunting one ever. On stage, her breathy rendition certainly came off, er, different. But she may have overacted it (or, at least, for my taste, did). Perhaps a quirk or two fewer stuffed into a single performance would have allowed her to better reveal the purity of her vocals that so wowed her coach. Votingwise, she’s lucky she redeemed herself with her big notes. 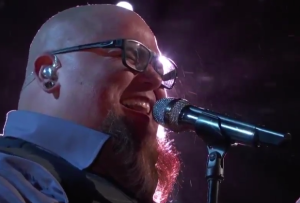 Jesse Larson (Team Adam), “Make You Feel My Love” — Grade: B- | “I die over your voice,” Shania told Jesse in rehearsal. Presumably, she meant “die happy,” too. In his performance, Jesse sounded… well, very Jesse: soulful and hearty and present. But there was a tanginess to his vocal that almost made my ears pucker. I know you love him — and hey, I think he’s super likable, too, and generally a solid singer. However, this didn’t “astonish” me the way it did Jesse’s coach.

Troy Ramey (Team Gwen), “Free Fallin'” — Grade: C | After being warned by Gwen and Shania about rewriting melodies, Troy… OK, he still took some liberties with the verses. But, in his defense, he sounded great singing them softly. Even Tom Petty would probably have approved. But on Troy’s big chorus, he was so shouty — strain much? — that I didn’t get the subtlety that Shania praised (and that had made the verses so winning).

Aliyah Moulden (Team Blake), “(Love Is Like a) Heat Wave” — Grade: A- | The teen was having as much fun as a basket of kittens in rehearsals — and sounded breathtaking trying out the Martha and the Vandellas classic a cappella. On stage, she conquered her nerves and sounded like a million bucks. Possibly even a million and a half. Frankly, she was so good, she had me thinking that maybe she and not my beloved Lilli Passero was the contestant destined to become a retro-pop star. Even Aliyah’s outta-nowhere big, last note landed. Kickass.

Chris Blue (Team Alicia), “Love and Happiness” — Grade: A | Advised by Shania and Alicia to explore the tender side of his vocal to give the Al Green gem more dynamics, Chris displayed even more range than usual (which, given his usual, staggering range, is really saying something). When he’s performing, you can take neither your eyes nor your ears off of him. The guy’s just a star. At this point, aren’t the remaining episodes of Season 12 just an excuse to check out a new Chris performance?

Lauren Duski (Team Blake), “Lord, I Hope This Day Is Good” — Grade: B+ | Adorably, Lauren fangirl’d out in rehearsal while harmonizing with her idol, Shania. Then, on stage, Lauren sounded as gorgeously earthy as her dress was sparkly. The Lee Ann Womack number might not have been the showiest of the night. But then, Lauren’s strength has always been her subtlety — she’s a delicate sketch artist, not a vocalist who sings in broad strokes. 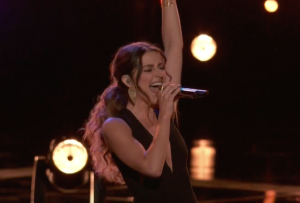 Lilli Passero (Team Adam), “Man! I Feel Like a Woman” — Grade: B+ | After getting so sick that she couldn’t make her rehearsal, Lilli managed to give a solid visual performance on stage — I mean, what couldn’t she sell with those eyes? Vocally, though, what was Adam thinking? Shania’s hit was about as right for Lilli as AC/DC would be for Mark Isaiah. She had fun with it, and sounded fine — definitely better than last week’s Live Playoffs — but this wasn’t the kinda song she’s really meant for, so she didn’t sound her absolute best. And keep in mind, this is coming from someone who’s rooting for her almost as much as Chris.

Brennley Brown (Team Gwen), “Long, Long Time” — Grade: A | Tackling the Linda Ronstadt classic, the teenage country girl packed in enough heart to break a few. And how impressive was the control she had over her vibrato? (Short answer: very.) Shania called her performance “as good as it gets,” and I’d have to agree. As far as I can hear, Brennley has become a much bigger threat than my former frontrunner Lilli to the Chris victory that seems by now a foregone conclusion.

TSoul (Team Blake), “Always On My Mind” — Grade: B | After a sorta shaky, uncertain start, Mr. Unique found his footing and took us to church. But the overall impression that this left was, “Gifted dude, uneven performance.” All the ingredients seemed to be there for something amazing — and bits of it were. But those awesome parts were greater than the whole, and that isn’t exactly what you want from a number that you hope will keep you advancing toward the finals. 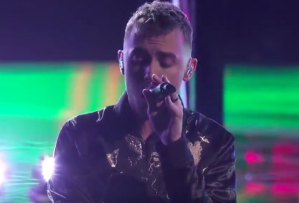 Hunter Plake (Team Gwen), “Somebody That I Used to Know” — Grade: B- | Putting an EDM-ish spin on Gotye, Hunter wasn’t sounding as polished as we’ve come to expect him to. He still howled like a champ when he got a chance, but mostly, the production swallowed up his vocal — ironic, considering, as his coach pointed out, the arrangement was his own (un)doing.

Vanessa Ferguson (Team Alicia), “A Song for You” — Grade: A | Tackling Donny Hathaway forced Vanessa to, as she put it, “apply [herself] emotionally.” The result was stunning — gorgeous and raw, and, arguably just as impressive, we saw the wall that I’ve often felt between us and her come down. If she can keep connecting with songs and us that way, she could be a serious contender. This was absolutely fantastic work. Wow.

So, who do you think is in trouble after tonight? What did you think of Shania as a mentor? Would you like to see her coach a team next season? Hit the comments.