Warning: The following contains spoilers for the series finale of Bates Motel. Be sure to ask, “Mother, may I?” before proceeding.

None of us were really expecting a happy ending to Bates Motel, were we? And yet, in the craziest, most bittersweet of all possible ways, that was kind of what A&E’s superlative Psycho prequel gave not only us but also the fatally close mother/son duo of Norma and Norman. How did the show pull it off? Read on… 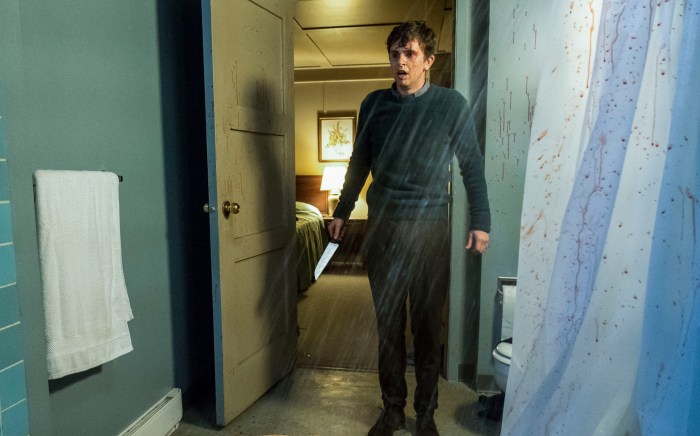 ‘GOODBYE, NORMAN’ | As “The Cord” began, Romero’s terrified hostage Regina drove him and Norman to the spot where Norma’s killer had re-placed her body post-exhumation. Once they were close, the former sheriff allowed Regina to head back to town on foot, then he continued on with Norman, who began arguing with Mother. Why, Romero’s passenger wondered aloud, should he tell his abductor where Norma was if he was just going to be killed either way? “Did you think about that, Sheriff Lonely-Heart?” In fact, Romero had thought about that — and, unless Norman wanted his death to be slow and excruciating, he’d cooperate. At Norma’s shallow grave, rather than help Norman move snow off the body, Alex took over and did it by himself. When Norman said he was sorry, he knew Romero had loved her, Norma’s widower pummeled him. Then, while Romeo sobbed over his late wife’s corpse, Norman recovered, beat him with a rock, got ahold of his would-be assassin’s gun and shot him twice. With his last breath, Alex reminded Norman, “You killed your own mother. You can’t hide from it.” Afterwards, Mother told Norman not to pay Romero any mind. But “I think I did kill her,” Norman whispered. Worse, Norma was leaving him. He knew everything now, and there was nothing left from which he needed protecting. With that, she bid him farewell and vanished. 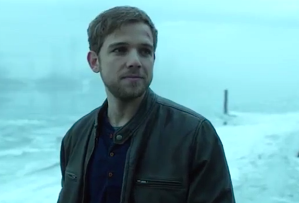 ‘I JUST HAD THE MOST HORRIBLE DREAM’ | When Norman awakened, he found himself in bed, right beside him Norma, assuring him that she wasn’t dead, silly he’d just had a nightmare. He’d have to learn to wake himself up from bad dreams, she added. He could do it if he just tried hard enough. In reality, of course, Norman was drifting in and out of consciousness in the snow near his mother and Romero’s bodies. His train of thought completely derailed, he next flashed back to the day that Norma told him they were taking his late father’s insurance money and moving to — surprise — Oregon, where they’d be “really, really happy.” (Oh, if only.) So, as Norman imagined Norma driving them to their new motel, he was actually driving home with her corpse in the backseat. “This is crazy, Mom,” he exclaimed upon seeing the motel. But “it’s all gonna be good,” she insisted. “You’ll see.” Meanwhile, as Regina finally made her way back to the police station, Dylan met with old pal Remo. It wasn’t just a friendly catch-up, though; Dylan was obtaining a gun — for protecting his family, so to speak.

‘YOU LOOK ALL ALONE’ | After putting Norma to bed, Norman reopened the Bates Motel — step No. 1: remove “crime scene” tape — and checked in a mother with two boys, one of them named Dylan. Off that, he phoned his brother, who was thinking/drinking on the grave matter at hand, and asked him to come over for dinner. “I miss you,” he told Dylan. “And I know Mother does, too.” So why didn’t they break bread, start over and be a family again? After ascertaining that Norman was no longer being held by Romero — he didn’t even know a Romero — Dylan headed to the house while his twisted brother cued up “Que Sera Sera,” got Mother dressed and set the table for supper. Before going inside, Dylan placed a call to fill in Emma, who begged him not to do anything stupid and reminded him that he had a daughter. “I know I have a child,” he replied. “Do I have a wife?” (No answer.) Finally, he asked her to tell him she loved him, but she refused to “arm him up” to risk his life. “I’ll never love anyone else but you,” he told her before hanging up. “You screwed me there, Emma Decody.” And that was it. They didn’t even say goodbye! 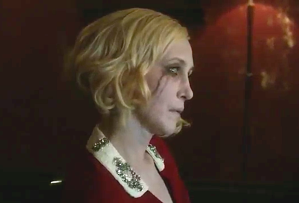 ‘THIS IS HOW IT ENDS, ISN’T IT?’ | Before heading up the stairs to the house, Dylan noticed that one of the motel rooms was occupied and sent the woman and her boys away to safety. At the door to the house, Norman warmly greeted his brother. “Mother is gonna be so excited to see you,” he said. At first, Dylan understandably responded that, come on, Norma wasn’t there. Then he caught a glimpse of her body propped up at the dinner table and puked. Unable to give up his fantasy, Norman suggested that Dylan was just sick, or in shock over their move to Oregon, or simply “overexcited” at being reunited. When Dylan attempted to bring his brother back to the real world, Norman begged him not to “ruin it,” adding that, “if you believe [in something] hard enough, then you can make it that way.” Since Dylan had to point out that that wasn’t true, Norman picked up a knife and warned, “I can’t let you take me away from her… I just want to be with her.” When at last Norman charged at his brother, a stricken Dylan fatally shot him. But, as he died, he was joyously reunited in his mind with his mother. So his last words to Dylan were “thank you.”

As the emotional hour — and this phenomenal series — drew to a close, Romero’s body was found, the motel was sold, Dylan and Emma were together again (and seemed happy — whew), and Norman had been laid to rest exactly where he wanted to be: next to Norma. What did you think of the series finale? Were you surprised that Norman was killed? Grade it in the poll below, then hit the comments.