Regrets, they had a few. Quite a few. And by the time Sunday’s FEUD: Bette and Joan finale was over, Davis and Crawford had added a couple more to the mountainous list. Read on, and we’ll review the heartbreaking events that led the infamous foes to the end of the rivalry that always should have been a friendship.

‘YOU CAN’T CATCH THEIR EYE IF YOU CAN’T CATCH THE LIGHT’ | As “You Mean All This Time We Could Have Been Friends?” began, Pauline was recalling in the 1978 documentary how working for Bob had made her feel like “the kind of doormat that’s holding up the whole house.” Luckily, she’d ended up finding greater opportunities in documentary filmmaking. She also remembered a chance encounter with Joan at LaGuardia years after they’d last seen one another. The diva was wearing a “Pepto pink” dress and enough foundation to be Bozo the Clown, had two broken ankles, was soused and seemed “very much tossed away.” Next, we flashed back to 1969, where we got a glimpse of Joan’s sad new life in New York City: weight gain, a lapdog in place of a child and, oh dear, she was spitting out blood when she brushed her teeth. At least Mamacita returned.

When Joan sought relief from her toothache, her dentist was horrified to see that she was missing six molars — and even more horrified when she explained that she’d extracted them herself in her 20s so that her cheeks would curve at a more elegant angle. Since her problems were about to get worse, much worse, he wanted to fit her for a denture. But oh no, “I’d rather spit blood into a sink than look like Martha Raye,” she said, adding that stars are like Christmas trees. “Once the lights are off, you sit there and watch the needles drop.” Later, Joan was stunned to learn from her agent Stan that she’d been offered a movie role. Even he advised her against it — it was that bad. Yet she wanted to take it, imagining a stellar performance in an indie would put her back on the map. Stan was more excited about an offer from Simon & Schuster for Joan to write a lifestyle-advice book for women. It could lead, he suggested, to everything from Joan Crawford luggage to Joan Crawford plastic furniture covers. 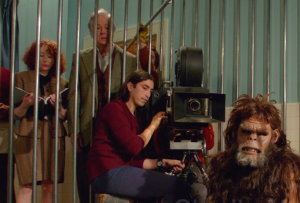 ‘I SIT ON HARD CHAIRS; SOFT ONES SPREAD THE HIPS’ | When Joan arrived in London for the shoot, there was no driver for her — never a good sign. At the ramshackle set, director Freddie broke it to her that the title was no longer The Missing Link but Trog. As if the sight of her “leading man’s” awful caveman getup wasn’t shocking enough, Joan then discovered that they’d be sharing a makeup table! She didn’t even get her own dressing room! At least she had her book to distract herself. The shoot itself went… well, as you’d expect. Joan wound up needing cue cards and spending her nights on the set stumbling through her blocking as if to make-believe she wasn’t making a B movie. When her self-help tome came out, sales weren’t great, and our one peek at a book signing was disheartening. Joan couldn’t even indulge the fan who sweetly explained that he loved Baby Jane because Blanche and Jane were survivors. Finally, seeing an unflattering picture in the paper, Joan decided that she was done. If that was how people saw her, they’d never see her again.

During Victor’s documentary interview, he admitted that he didn’t think Charlotte had had the magic of Baby Jane, and added that Bette’s poor reception had made her desperate — so desperate that she was doing TV pilots, none of which even her fading star power could get picked up. What did Hepburn have that she didn’t? Bette wondered. Why was she still getting primo opportunities? “Katharine sometimes says no,” Victor suggested. But Bette was well on her way to a new feud, miffed not only at Hepburn’s continued success but at the fact that she’d refused to do a joint photo shoot for Life magazine. If Katharine was sitting where Victor was, Bette would tell her, she said, that she pitied her, because at least Davis had the love of her children. As if. In ’72, we saw how fractured Bette and B.D.’s relationship had become. B.D. — still wed to Jeremy, to Mom’s astonishment — forbade her from seeing her grandkids alone anymore after she’d swatted one of the boys for crying. What’s more, she wanted Bette to do something about her drinking problem. What drinking problem? “You’re sitting right there with a margarita at 11 a.m.!” B.D. noted before dropping the mic. 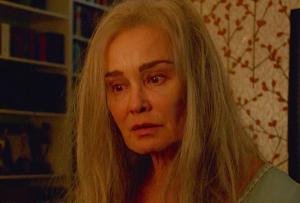 ‘WHY AM I SO HAPPY TO SEE YOU?’ | Later, Bette’s doctor suggested that she lay off the cigarettes. But she couldn’t possibly, since she’d been sober for 17 days. She also couldn’t go to rehab, as she had to attend the Dean Martin roast — which would have driven anyone to drink! Then came The Disappearance of Aimee, the TV movie in which she played Faye Dunaway’s mother — and on which the future Mommie Dearest star was apparently so unprofessional, she made Bette rethink her loathing of Joan. “At least she had the decency to show up on time,” Bette told Victor. Hearing Bette’s softening toward Joan, Victor revealed to her that Crawford was dying of cancer. No, she isn’t, Bette insisted. “She’s a cockroach just like me.” At least she took his advice and phoned Joan… Trouble was, she couldn’t bring herself to say hello. In ’77, Joan was visited by daughter Cathy, who’d heard from Mamacita that she’d stopped seeing her doctor. Even more worrisome, the neat freak didn’t seem concerned anymore if Cathy’s kids scuffed the floor! No, the only thing by which Joan was troubled was the fact that she’d heard Christina was writing a most unpleasant tell-all. Regardless of Christina’s experience, Cathy reassured Joan that she and Cindy had had the best mother anyone could ever have had.

Later, during a dark and stormy night, Joan awakened hearing laughter. Investigating, she walked into a dream in which Hedda and Jack were playing cards by candlelight in her living room. When she entered the scene, she was suddenly younger and, like her “guests,” dressed to the nines. Pleasantly, she called them on their habit of throwing gasoline on her resentments, making every job a death match. Of course, the expression isn’t “unite and conquer,” Jack reminded her. Why did she have to be conquered at all? she asked. At that, Bette joined them and encouraged her to tell Hedda and Jack what their merciless machinations had done to her. They’d scared Joan into being “on” all the time — so much so that “I don’t know who I am when I’m by myself.” Though neither Jack nor Hedda could bring themselves to apologize, Warner suggested that, in the end, “all the suffering will have been worth it.” Left alone with Joan, Bette invited her to play a game called Regrets, in which Crawford said she was sorry she hadn’t been more generous with Davis, and Davis admitted she wished she’d been a friend to Crawford. “We can start now,” Joan said, and called for Mamacita to bring champagne. Only when her maid arrived on the scene, there was, of course, no one there, and Joan was still old and disheveled.

‘FIFTY YEARS IN SHOW BUSINESS, AND THEY GIVE HER TWO SECONDS’ | “She died one week later,” Mamacita said in the doc, adding that, while everyone showed up at Joan’s funeral, no one had been there for her when she was alive. When the Associated Press phoned Bette for a comment, she recalled that her mother had taught her to say only good things about the dead. Therefore, “Joan Crawford is dead. Good.” Only clearly, the news had affected Bette; she just still couldn’t bring herself to say a kind word about her old rival. During a visit with Margot, Bette discussed her date with Don, a gay artist whose sketch of her scared even him, and revealed that she’d recently learned “my mother said terrible things about me behind my back.” At the ’78 Oscars, Bette, Olivia, Joan Blondell and Victor raised a glass to Crawford during the In Memoriam segment. Bette also reiterated to the doc director she would not be participating. As the episode — and Bette and Joan — drew to a close, we flashed back once more to the first day on the set of Baby Jane. By the time the shoot is done, Crawford told her co-star, “I hope I’ve made a new friend.” Replied Davis: “Me, too.”

So, what did you think of the FEUD finale? Grade it below, then hit the comments.