Don’t let the title of Netflix’s new comedy Girlboss fool you: Although its protagonist does find success in the business world eventually, she begins the series at the very bottom rung of the corporate ladder.

Actually, when we first meet Sophia, the ladder doesn’t even exist.

Girlboss — which drops on the streaming site Friday — is loosely based on the life of Sophia Amoruso, who founded the fashion brand Nasty Gal after first building an empire on eBay, where she resold vintage clothing that she bought for very little. But our first glimpse at the fictional Sophia (played by Life Unexpected‘s Britt Robertson) introduces a 23-year-old cynic who believes that adulthood is “where dreams go to die” — despite, admittedly, not having any dreams of her own, until she realizes how lucrative her interest in fashion can be. 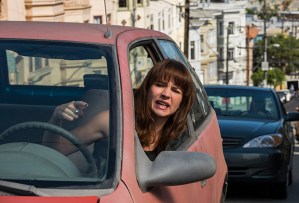 According to series creator Kay Cannon, it was important for Girlboss to take place in 2006 — just before Sophia launches her own company — so that viewers could watch her journey from apartment evictee to entrepreneur.

“I wanted to show where she feels like an underdog — this lost, angry underdog,” Cannon tells TVLine. “Her being on eBay and then getting kicked off eBay, which then caused her to launch her own site — that’s big. That’s a big turning point in her life.”

Cannon also wanted her main character to revel a bit in the success that she does find. One particular scene finds Sophia, on the eve of her company’s launch party, marveling with her friend Annie about the milestones she’s experiencing.

“It’s important to have those moments where you’re with your friend and you’re like, ‘It’s happening. Life is changing,'” Cannon explains. “[The scene] was so well-shot, and their acting was so great, and it feels so real and grounded. [Sophia will] never forget that, and then more things will happen, and hopefully she’ll have a moment where she won’t forget the next thing.”

Still, even though Sophia gets her first taste of the fashion industry in Episode 1, her trajectory across 13 installments isn’t without some speed bumps — and Robertson is a big fan of her character’s adversity.

“I love the setbacks and then overcoming those setbacks. You get a sense of what this girl is experiencing and why it’s so confusing and complicated,” the actress teased. “There’s a real payoff in the end. It’s why I fell in love with her.” — With reporting by Kimberly Roots