National Geographic’s new scripted anthology Genius — premiering next Tuesday, April 25 at 9/8c — brings to mind a puzzling query: Why have we never seen a filmed biopic of Albert Einstein?

Einstein is one of the most iconic figures of the past century, with landmark scientific theories that made his name synonymous with brilliance. But outside of a few supporting roles and inaccurate comedies — Young Einstein, anyone? — his life story has never really been properly told on screen before. (Is it because we’d rather watch superheroes crush buildings to dust than watch a man of great intellect actually use his brain? It is, isn’t it? Sigh.) But the inaugural season of Genius sets out to right that wrong with a ten-episode deep dive into Einstein’s life, and mostly succeeds in turning it into compelling drama.

Based on Walter Isaacson’s comprehensive biography, Genius is split into two parts, with Oscar winner Geoffrey Rush as the older Einstein and Johnny Flynn (Lovesick) playing Einstein in his younger years. With a mane of wild white hair and a rumpled charm, Rush bears an uncanny resemblance to the Einstein we all recognize from dorm-room posters and Apple ads. And he positively embodies the iconic thinker as Einstein teaches theoretical physics and deals with fame amid a growing wave of anti-Semitism and German nationalism in the early 1920s. 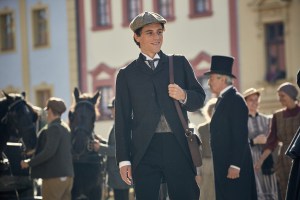 I expected Genius to lag when it switched away from Rush to scenes with young Einstein, but Flynn is actually terrific in the role. He’s got a real Oscar Isaac vibe about him and a charismatic energy, painting young Einstein as an intellectual bad boy of sorts, annoying his professors with brash questions that no one else ever thought to ask. The second episode focuses entirely on Flynn’s young Einstein and his studies in Zurich, balancing his scholastic pursuits with a pair of romances — and as great as Geoffrey Rush is, I didn’t miss him at all.

Now granted, there are some cinematic pitfalls in doing a biopic about a great thinker like Einstein. Theoretical physics isn’t exactly a spectator sport. You can’t just train a camera on Geoffrey Rush’s face as the theory of relativity occurs to him and expect people to stay awake. But thankfully, Genius livens up Einstein’s dry scientific inquiries with lush visualizations that recall the CGI used in Fox’s recent Cosmos remake: When Rush’s Einstein asks his students to visualize the sun, a glowing sphere of light appears over their heads, with light waves squiggling though the air. (We can thank executive producer Ron Howard, who directs the premiere, for that little flourish.)

If anything, Genius stumbles when it tries to compensate for its highbrow content by spicing things up with sex and violence. We’re introduced to Rush’s Einstein as he’s schtupping his much younger mistress in an empty classroom, and Flynn’s Einstein has a few steamy trysts of his own. And Rush’s scenes get bogged down by heavy political overtones, with the surging Nazi party stepping on the throats of anyone who opposes them. Yes, the rise of Nazi Germany plays a big part in Einstein’s life story — and yes, Einstein’s plight is unfortunately relevant today — but it feels like the producers didn’t trust that we would pay attention to Genius without some blood and nudity thrown in.

But we would, actually, thanks to the stellar performances from Rush and Flynn. Both actors combine to bring a legendary genius vividly to life in a way that we’ve never seen on screen before. And even though the first two episodes barely touch on Einstein’s greatest hits (we’re a long way away from E=mc2 and the atomic bomb), they still make for fascinating viewing. Even with its flaws, Genius gives us an unprecedented glimpse inside the 20th century’s greatest mind — and a long overdue one, at that.

THE TVLINE BOTTOM LINE: Genius boasts a pair of great performances that help bring Albert Einstein to life like we’ve never seen before on screen.