In Night 1 of The Voice’s Season 12 Live Playoffs, a dozen vocalists took to the stage, half of them performing what would turn out to be their swan songs, and two of them previously eliminated competitors who were returned to the contest via the Coach Comeback, which made a comeback of its own. Who survived Team Alicia and Team Blake’s cuts? Read on…

Casi Joy, “Parachute” — Grade: B+ (eliminated) | Though Casi sounded a little off a time or two, owing perhaps to her bopping around the stage more than was advisable, she at worst only ever sounded a little off. Mostly, she sounded kickass, packing her Chris Stapleton cover with enough vocal power that she seemed a shoo-in to make the Top 12. Plus, that glorious rasp of hers is just about impossible to resist.

Aaliyah Rose, “Brass in Pocket” — Grade: C- (eliminated) | The 14-year-old sounded her best when she hung out in her lower register during her performance of the Pretenders classic. But the overall impression she gave was at best above-average karaoke. When she sang “I’m special, so special,” didn’t at least a few of you think, “Hmm, are you, though?” And that last note… ack.

TSoul, “Knock On Wood” — Grade: B+ (saved by Blake) | Beyond the wildness of hearing a song that’s so familiar as a disco ditty redone in organic TSoul style, Mr. Originality put on a helluva show. Not only was he solid vocally, but he moved with such abandon that his coach declared it “what performing is supposed to be all about.” 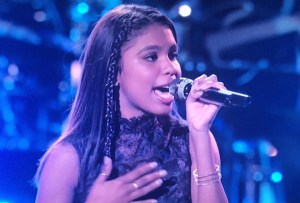 Aliyah Moulden, “Mercy” — Grade: A- (saved by America’s vote) | OK, now this was a well-chosen song! The Duffy smash suited the teen’s bombastic voice to a T, allowing her to start strong and finish even stronger. And, maybe because she was so in her element, she didn’t just sound great, she seemed like she could actually enjoy herself. That little laugh/sigh toward the end… adorable.

Lauren Duski, “Someone Else’s Star” — Grade: A (saved by America’s vote) | A typically gorgeous vocal from Lauren, whose understated, emotional delivery won you over from the start of the season and, I’ll admit it, has totally won me over, too. (Late to the party, yeah, but at least I got there.) Performances don’t get a whole lot more polished than this.

Chris Blue, “Love On the Brain” — Grade: A+ (saved by America’s vote) | Not only did the old-school vibe of the Rihanna gem play to Chris’ retro-soul strengths, he was able to sing it in Riri’s key, for Pete’s sake! The guy is just insanely good! If this wasn’t a star-is-born performance, it was for sure a star-is-made one. The stuff Chris did with his voice — the range, the inventiveness… insanely good! Just insanely!

Anatalia Villaranda, “Stand By Me” — Grade: B+ (eliminated) | Whoa — another singer killing it from the word “go.” This was a less frenetic performance than we’ve gotten from Anatalia before, and, in a way, it allowed her to shine more brightly, offsetting her big, showy notes with quirky little ones that highlighted her versatility.

Jack Cassidy, “Don’t Let the Sun Go Down On Me” — Grade: B (eliminated) | Alicia’s comeback artist started off smoothly, began soaring as he got to the chorus and… OK, yeah, he seemed to lose control of his vocal now and again, and he pointed so much, he could have been helping someone navigate their way into a tight parking space. But the takeaway from his performance was that this was his strongest showing to date. 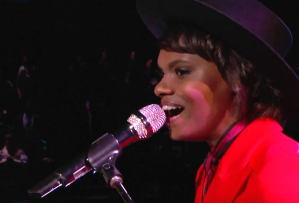 Vanessa Ferguson, “Lean On” — Grade: A- (saved by America’s vote) | Vanessa sounded as cool as a freshly mixed martini on her version of the Major Lazer hit. And she managed to remain vocally flawless even as she went from playing the piano to working the stage. But I couldn’t help but wonder if she had the star quality to really break out. (Guess her save answered that question for me!)

Ashley Levin, “I Can’t Stand the Rain” — Grade: B (eliminated) | I really wanted to love Ashley’s country-soul take on the Ann Peebles oldie — it was a cool idea and is a great song. And there were definitely times when Ashley sounded badass. But there were also times where she sounded screechier than her coach could have possibly wanted. Maybe I’m just still irked that Alicia dumped Lilli for Ashley.

Stephanie Rice, “Every Breath You Take” — Grade: A (saved by Alicia) | Stephanie’s beautiful, spare arrangement of the Police ballad allowed her to show off not only her appealing soft side but also the sandpaper-rough rasp with which she’s so closely associated. The back-and-forth between the two was stunning — powerful and winning.

OK, your turn. Who did you think gave the night’s best and worst performances? Any eliminations that shocked you? Hit the comments.