That’s the question on the former president’s mind during Sunday’s Season 6 premiere of Veep, which picks up one year after the historic House vote that elected Laura Montez as her successor and put a cap on any potential legacy Selina thought she was going to cement as the first female POTUS.

The episode starts off long after Selina’s mourning period, which apparently involved a temporary stay at a spa. We first see her being interviewed by Dan, who is in the running for a permanent co-hosting gig on CBS This Morning. Having recently made headlines for once pardoning a private prison magnate charged with tax evasion, Selina tries to change the subject by announcing her new charitable foundation: The Meyer Fund for Adult Literacy… and AIDS. She is also said to be working on a memoir about her only year in office, and she’s already wayyyyy behind schedule.

After the interview, we learn that Richard is now working as Selina’s assistant, with Gary forever stuck in the lowly position of bagman. Once back at her office, she confides in Gary that she plans to attend the Madison-Monroe dinner in Iowa the following week, an event attended by anyone looking to run for president. That’s right, folks: Selina, who was once voted the second least-effective president ever, wants back in at 1600 Penn, and in that moment, Gary’s face conveys how we’re all feeling. This is a terrible idea, regardless of whether Selina sees it that way or not.

Later, Selina gathers Andrew, Catherine and daughter-in-law (yes, daughter-in-law!) Marjorie to share the big news. Though she promises not to run if any of them have any objections, she mocks Catherine for her visceral reaction and tells them all that this was just a test. Whether they like it or not, she’s already made up her mind to run and there’s nothing they can do about it. Ben is eventually able to knock some sense into Selina when he pays her a visit, telling her that she neither has the party nor the donor support to make another White House bid feasible. Clearly devastated, she assures Ben that she was only talking in hypotheticals (yeah, sure), then offers him a job working with the Meyer Fund for Adult Literacy… and AIDS. 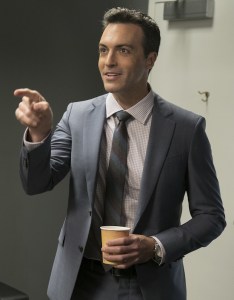 * Dan is determined to get that CBS This Morning gig, until he realizes that his would-be co-host has the potential to destroy his career altogether. He attempts to get himself fired by causing Jonah to freak out on live television, but his producer (played by Fresh Off the Boat‘s Paul Scheer) is unexpectedly elated with the spectacle.

* Jonah is in remission after a recent battle with testicular cancer. He continues to shave off all of his hair to guilt women into having sex, so don’t feel too bad for him.

* Ben loses his job at Uber for making one too many racially insensitive comments, before accepting a job with the Meyer Fund.

* Amy has relocated to Nevada, where she is engaged to Buddy Calhoun and running his gubernatorial campaign.

* Mike, who feared he would never work again, gets hired by Selina so she can gain access to the diary he kept as White House Press Secretary to use for her memoir. Unfortunately, she won’t be able to pay him unless her book — assuming it ever gets released — reaps a profit.

* Amy, attempting to motivate Calhoun’s campaign staff: “Saddle up those emphysema tanks, you inbred cousin f—kers. We are going to drag this state into the 20th century. That’s right, I said 20th!”

* Dan, aptly describing a hairless Jonah: “You look like you should be underground, worshiping an atomic bomb, you human f—king pap smear.” (Bonus description: “You know I didn’t think it was possible for you to look more like a giant c—k, but I guess it’s true what they say: You are what you eat.”)

* Ben, attempting to make sense of the Meyer Fund for Adult Literacy and AIDS: “Maybe if we teach them how to read a condom wrapper, they won’t get AIDS in the first place.”

Have thoughts about Sunday’s Veep premiere? Grade the episode via our poll, then drop ’em in a comment below.