The following story features spoilers from Sunday’s The Good Fight finale on CBS All Access. If you have yet to stream the episode, hit the nearest exit.

The bastard threw his own flesh and blood under the bus!

In the closing act of The Good Fight‘s inaugural season finale, we learned that the embattled Henry Rindell (played by the terrific Paul Guilfoyle) decided to forego a plea deal that would’ve landed him behind bars but cleared daughter Maia (Rose Leslie). Instead, he chose to hit the road and live out his days as a fugitive. Cut to the feds showing up at Maia’s doorstep to arrest her as the closing credits rolled.

Below, series creators Robert and Michelle King shed light on the episode’s biggest moments while also teasing what — or who? — is coming in Season 2.

TVLINE | You must have been pretty confident you were getting a second season when you wrote the finale.
ROBERT KING | We actually knew at that point. We knew from, I think, Episode 6 or 7 on [that we were coming back].

TVLINE | Was there a more tidy Plan B in case you didn’t know if the show would get a second season?
ROBERT | It wasn’t a Plan B based on our future, it was just a Plan B. We didn’t know which way we were going to go with this ending. We basically had a binary choice: One would be to have Maia be arrested, which is the way it is now, and the other is Henry would fall on his sword and take the 35 years to [spare] his daughter. That would’ve been the more wishful-thinking way to go.

TVLINE | I feel like the takeaway here is that Maia’s dad is not a very good man.
MICHELLE | He’s a deeply selfish person. I think he does love his daughter and his wife, but not as much as he loves himself and his own comfort.
ROBERT | You’re [led to believe] that his crying at the end is about him going to jail. But it’s really him feeling bad that he’s going to do this to [Maia]. But not so bad that he isn’t going to do it.

TVLINE | Is this the last we’ll see of Paul Guilfoyle?
ROBERT | The only reason I can’t answer either way is because it’s [the in-demand] Paul Guilfoyle. We love working with him. It’s probably [the last time], but that doesn’t mean he won’t be around in the same way he was in Episode 9, which is in memory. 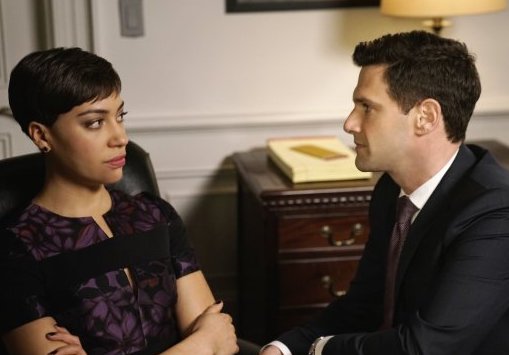 TVLINE | Are Lucca and Colin finished?
ROBERT | No. We have Justin Bartha back next year. And those two have the kind of relationship where they’re always going to be sniffing around each other, even if it’s just as f— buddies for this moment. And another moment maybe something more.

TVLINE | Was it important for you to give Diane some degree of happiness with Kurt at the end of the season considering how dark things were for her at the beginning?
ROBERT | Definitely. Poor Diane started the year with the s–t kicked out of her. And it does seem like one of the things she deserves in life is happiness at home. It’s hard to talk about characters in that way because not everyone who deserves goodness in real life gets goodness. But there is everything in her that wants to forgive [Kurt]. On the one hand, she can’t. On the other side, with the administration and the world the way it is, [she] really needs heroes. And there’s something about a guy who doesn’t take credit for, and is even embarrassed by, his heroism.

TVLINE | One of my favorite aspects of this first season has been the Adrian-Diane dynamic/friendship. When did you realize you had something special there?
MICHELLE | It sort of grew on us.
ROBERT | The key is to try and get different male energy than we had on The Good Wife. When Will died, there was this real sense that Diane worked best when she had a male counterpart that was as different from her as possible. And we didn’t want it to be a repeat of Josh Charles. So to go to this guy who is a very big presence and a showman felt like a good contrast to Diane. And Delroy Lindo plays that perfectly. 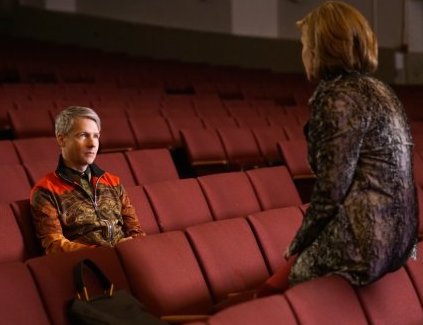 TVLINE | The way Mitchell’s Felix folded into the case of the week was a nice little twist. I know the character was conceived as a Milo Yiannopoulos-type provocateur, but Felix is coming off as far more likable. Felix actually seems like he has a conscience.
ROBERT | On the one hand you’re right: It’s irresponsible to portray Milo, or at least that [alt-right] philosophy, in a more attractive package. On the other hand, we were just having fun, because John Cameron Mitchell is really a fun actor. You bring up a good point though, and it’s probably why this character doesn’t have a long future in front of him. Because I don’t know how true to life he is.

TVLINE | Will we learn more about what makes Barbara (Erica Tazel) tick in Season 2?
ROBERT | We underplayed Barbara this season. There’s [more] to be done there.

TVLINE | I’m getting a little bit of a romantic vibe from your bickering detectives Marissa and Jay…
MICHELLE | It’s a deeply buried undercurrent. The question is whether it will bubble up or not.

TVLINE | Last question: How many episodes are we getting in Season 2?
MICHELLE | We have been instructed to hold off on talking about that.