Any fan of Davis, Crawford or both knew going into this week’s FEUD: Bette and Joan that the title of What Ever Happened to Cousin Charlotte? wasn’t going to be the only thing about the movie to change before its release. But even we couldn’t have guessed just how sad it was going to be to watch jealousy, insecurity and vindictiveness undermine the leading ladies to the point that Joan got herself replaced by Bette’s pal, Olivia. If you can bear to relive the episode, read on and weep…

‘BEAUTY, DIGNITY AND DEATH IN ONE EXQUISITE POSE’ | As “Abandoned” began, Joan’s high spirits on location at a Baton Rouge plantation plummeted when she realized that Bette and Bob had been going at it “like bunny rabbits.” That wasn’t going to make it any easier for the tippler to, as she intended, stay on the wagon during production. At the same time, Bette, too, was thrown when, during an after-work party with Victor and their colleagues, it was suggested that, by letting Joan play the villainous Miriam, she’d given her co-star the role that was Oscar bait. The fuse lit, the bomb went off the next day on the set when not only did Bette constantly whisper notes in Bob’s ear, she criticized Joan’s performance. When in her trailer Crawford lit into her director for letting Bette interfere, he reluctantly revealed that he’d had to make her a producer on what was now called Hush… Hush, Sweet Charlotte. It was just a vanity title, though, he assured Joan. Meaningless. Seething, she told him she’d delight in watching Bette show him just how “meaningless” she considered her new role.

At the following night’s cast party — without Joan, always without Joan — Victor stuck up for Crawford when Bette made fun of her. In response, Davis said that when Joan had been the most beautiful woman in Hollywood, she’d been a total bitch to her. “I remember thinking then, ‘Beauty fades… just wait.’ And it did.” Later, a soused Bette admitted to Bob just how much looks mattered to her, and recalled her first screen test for Jack back when she was a mere 22. Afterwards, she’d eavesdropped and overheard Warner say she had “zero sex appeal,” so who’d want to f— that? “And,” she added sadly, at that point, “nobody ever had.” The next day, when Joan complained about the Louisiana heat after shooting her side of a scene with Bette, Davis suggested she go lie down somewhere cool — she could have the script girl feed her Crawford’s lines. Feeling rejected, Joan hit the flask — hard. By the time she’d come to in her trailer, night had fallen, and the rest of the cast and crew had left the plantation! 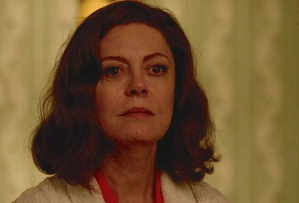 ‘I’M A CHARACTER ACTRESS’ | When at last Joan made it back to the hotel, she banged on Bette’s door and, livid, marveled at what a fool she’d been to put any stock in their alliance. As the confrontation escalated, she suggested that Bette only got so many Oscar nods because no one ever saw her characters, they only saw her acting. In turn, Bette spat that nobody ever saw Joan’s characters because she hid them under so many layers of glamour. Finally, Joan offered Bette a free tip: “The answer to feeling unattractive,” she hissed, “isn’t to make yourself even uglier!” Before Crawford stalked off to her room, Bette asked, sincerely, how it had felt to be the most beautiful girl in the world? “It was the most joyous thing you could ever imagine,” Joan responded, “and it was never enough.” How had it felt to Bette to be the most talented? “Great,” she said. “And it was never enough.”

When production moved to L.A., Joan was hopeful that the shoot would start to go better. But before she’d even made it to her mansion, she’d noticed that her big monologue had been cut from the revised script. “This is [Bette’s] doing,” she told Mamacita, “and Bob is colluding with her.” So, rather than go home, Joan headed for the hospital. She was suddenly — conveniently — feeling very ill. Bette — when not dealing with 16-year-old B.D.’s determination to marry “a 40-year-old man” (who was actually 29) — kept Charlotte going with Bob by using a stand-in to shoot Joan’s scenes from behind. Almost two weeks later, Bob finally paid Crawford a visit at the hospital, where she cheerfully agreed to recover overnight if, say, her character could have more beaus and a grander entrance. Refusing to be bossed around again like he had been by Sinatra, Bob told Joan to stop reading her script, start reading her contract and be on set at 7 a.m. sharp. 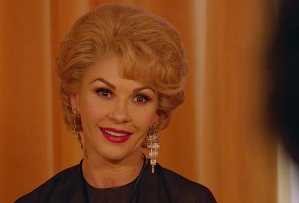 ‘GO TAME THE GODDAMN LION!’ | Miraculously, Joan did show up at the studio the following day — in a wheelchair, no less. “She thinks we’re doing the last picture,” cracked Bette. Still, for a moment, it looked like Charlotte might be able to get back on track when Davis presented Crawford with a rose… thorns removed. But as soon as Bette argued for trimming Joan’s scene with Joseph Cotten, the “ailing” actress grew faint and had to be rushed back to the hospital. Furious, Bob yelled at Bette that “being right doesn’t mean s— if you’re driving talent off the stage!” Almost a month after Joan’s last full day of work on the picture, she and her lawyers met with Bette and 20th Century Fox’s attorneys. Since Crawford was suffering from a “rare form of pneumonia,” Fox offered to release her from her contract and recast her. “She’s not sick,” said Bette, unable to restrain herself at all during this confab, “she’s on strike!” Ultimately, Joan agreed to an independent medical exam — though she was warned that, if she was cleared to work and didn’t return to the set, she’d be slapped with a humongous lawsuit.

Later, Bette, having agreed to let B.D. marry older man Jeremy if she could plan the wedding, was hurt to learn that as soon as she’d signed the consent forms, the couple had eloped to City Hall. Meanwhile, in spite of Joan’s attempt to seduce the young doctor examining her, she was cleared for work. When Pauline pleaded with Crawford to be sensible, she swore she’d have Bob can the “secretary.” (Which didn’t faze Pauline at all — she’d already decided that ego-driven Hollywood wasn’t the place for her.) Since Joan still didn’t go back to the studio, Fox sued. In response, she checked herself into the “celebrity wing” of Cedars Sinai with every intention of shutting Charlotte down, costing Bette a fortune and losing Bob his production company. Only Joan was overconfident that no actress would be willing to take away from her the role of scheming Miriam. Though at first Olivia protested, “I don’t do bitches; you should call my sister,” after Bob trekked all the way to Switzerland to talk to her, she agreed to replace Crawford. When Joan heard the news, as she so often did, she lost control — and hurled a vase at Mamacita’s head. Just as her loyal companion had warned her she would, Mamacita turned on her heels and left her. How could she do that to Joan? “You have done this to yourself,” Mamacita said. And, at least in part, that was true.

So, what did you think of “Abandoned”? Hit the comments.