Netflix’s new comedy Dear White People (arriving Friday, April 28) is like a promising college student who tails off midway through the semester: lots of potential at the beginning, followed by a disappointing lack of focus.

Like Justin Simien’s 2014 movie of the same name, the pilot (also written and directed by Simien) takes us to the fictional campus of Winchester University, a mostly white Ivy League school where students of different races only mingle in brochure photos. Media student Samantha White (Hit the Floor‘s Logan Browning) points out the casual racism she experiences every day on campus in a series of college-radio rants she calls “Dear White People.” Well, some white students don’t love being addressed like that and respond by throwing a “blackface” party, with white students dressing up as black stereotypes… and you can probably guess how well that goes over.

Simien captures all of this with a vibrant, lively filmmaking style — on-screen visuals introduce each residence hall and student clique like they’re in a living brochure — and his writing dives headfirst into touchy subjects like race, class and gender, making sure to address two or three angles you may not have considered. (If you have a problem with a show called Dear White People, good news! So do a lot of people on this show.) Plus, the dialogue is filled with sharp jokes: Sam declares that “the McRib was invented by Republicans in the ’80s to destroy black communities… along with crack and Jerry Springer.” Not all of the black characters are fiery activists like Sam, either. Some don’t care about politics at all, and Simien does a nice job of presenting a wide variety of viewpoints and proving that the African-American experience on campus isn’t all about fighting for justice. 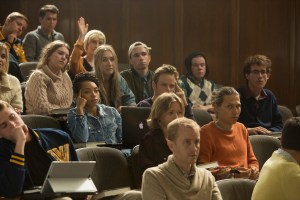 The first episode borrows heavily from the plot of the film, but it’s a solid introduction to the Winchester student body. After that, though, Dear White People starts spinning its wheels and loses all of its narrative momentum. Episode 2 shifts its focus to dorky student reporter Lionel (DeRon Horton) and his struggles with his sexual identity, retelling the events of the pilot through his eyes. Then Episode 3 does the same thing, only with polished class president Troy (Insecure‘s Brandon P. Bell), the son of the school’s dean. And then Episode 4 does the same thing again with Sam’s former friend Coco (Antoinette Robertson), flashing back to the origins of their feud. Suddenly, we’re four episodes into the series, and we haven’t really moved past the events of the pilot.

It’s a frustrating structural choice, and one that makes the show harder to connect with. Yes, we get to know Lionel and Troy and Coco better, but we barely see Sam at all in those three episodes, and we lose track of whatever story we’re supposed to care about. In the pilot, we learn that Sam has a white boyfriend named Gabe (Hindsight‘s John Patrick Amedori) she’s afraid to go public with, and their complicated relationship feels like fertile ground for conflict (and comedy). But Gabe’s completely absent from the next three episodes. So their relationship wasn’t that important after all, I guess?

Experimenting with form like this can work for truly inspired comedies like Louie and Atlanta, and it helps that this is on Netflix, where viewers can buzz through multiple episodes in one sitting. But it just feels like Simien was eager to expand the universe of his original film, and ended up overextending himself. The result feels more like a series of self-contained short films than a TV show. That puts the burden on the cast of mostly newcomers to command our attention in their solo showcases, and unfortunately, they largely come up short.

Which is a shame, because Dear White People has a great, timely premise and does highlight some fascinating aspects of today’s campus culture. (Also, we just need more good college shows on TV these days. It’s been an underserved genre for too long.) But the ill-advised structure of the early episodes kept me from connecting with the characters — which is really the end goal of any TV series, right? It might find a way to bring up its GPA by season’s end, but for now, Dear White People gets a decidedly mixed report card.

THE TVLINE BOTTOM LINE: Dear White People tackles tough issues with a fresh perspective, but it loses all narrative momentum after a strong pilot.