When The CW’s Arrow resumes Season 5, it will be all hands on deck as Oliver & Co. set out to find Adrian Chase aka Prometheus, who brutally bested his WITSEC detail upon realizing his jig as a mild-mannered D.A. was up.

Now among Team Arrow’s hodgepodge of assets is Dinah Drake, who slowly but surely has assumed the role of Black Canary (about a year, in real time, after Laurel Lance’s tragic death). TVLine spoke with newcomer Juliana Harkavy about whipping herself into crimefighting shape, the secret to the Canary Cry, Dinah’s dynamic with her teammates and the prospect of a showdown with her predecessor’s devious doppelganger.

TVLINE | When did your journey to Arrow begin? And what did it involve?
It began in October, and it was a really quick process. It was basically an audition on Tuesday, the callback was Wednesday, and at 4am Friday I had a car pick me up to take me to Vancouver. I had just moved back to L.A., so it was all sort of a whirlwind when it all did happen.

TVLINE | Did they tell you that your character ultimately would be inheriting the mantle of Black Canary? Which is kind of a big deal.
After I booked it, they sort of told me everything that the role entailed. I had no idea that it was this big or this iconic or this epic, so it was very exciting when I found out. I had no idea going in.

TVLINE | Caity Lotz of course brought dance and some martial arts skills to the role, and Katie Cassidy was no stranger to the gym during her run. Do you bring anything innately physical to the table?
Well, I was always an athlete; my grandfather and my dad are basketball players, and I played sports my whole life. I have done dancing as well. Not really much martial arts, but I felt confident in the gym. And when I got here, they instantly started to teach me all the techniques and put me with trainers…. But I did feel confident, physically, going in.

TVLINE | Had you ever thrown a punch in your life? Smacked somebody?
No. [Laughs] I joke but I’m sort of serious: I’ve always wanted to get into a fight. I know that sounds horrible, but I always had the desire to see what it’s like. There’s something that seems so fulfilling about punching somebody. It’s good that I got this role, so I don’t end up hurting anyone for real. [Laughs]

TVLINE | How has your fitness regimen changed since joining Arrow? I cruised your Instagram, and you seem to have a healthy perspective on the whole thing, how it’s not about being “skinny” but “strong.”
That’s exactly right. One of the things that happened after I got this job and learned I’d be training and learning bo staff, is they said, “We don’t want you to be skinny. We dont want you to lose weight and restrict food.” Bam, our stunt coordinator [James Bamford], has been my biggest supporter when it comes to that. He said, “I would almost rather you have no neck because you’re so muscular than come to me and be unhealthy because you’re trying to be skinny. Superheroes have muscle, they’re strong. You don’t have to worry about a number on a scale.” From that moment on, it wasn’t stressful, it wasn’t like I have to work out because I have look a certain way. It was because I want to be strong, I want to be a superhero, to be able to stand up there with these big guys. It’s been probably the most healthy I’ve felt, because mentally I feel healthier as well going into it.

TVLINE | I liked one photo you shared, showing off your new lats….
Thanks! I’m working on it. It’s just so fun to wake up in the morning and have new muscles on your body. It does make you feel like a bigger, better version of yourself. 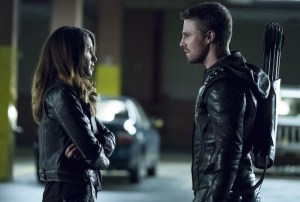 of months into your run, how would you describe Dinah’s relationship with Oliver, with Diggle?
I think that these are the people she’s allowed herself to get closest to in a very long time. This is the first group that she’s allowed herself to be vulnerable with. Oliver was the one who sought her out and let her in, so her connection to him in particular is a special one. She has a particular fondness for Oliver — not in a romantic way, but as a partner. And with Diggle, he’s the second in command, and that appeals to Dinah. She likes to sort of team up and go on runs with him. He’s a competent fighter and so is she.

TVLINE | It’s kind of like whereas Oliver brought Dinah in, Diggle has been the one who got her settled in and showed her how to be a team member.
Exactly. That’s such a good way to put it. It’s a really nice dynamic, and it does make it feel like a big family where we’re all working together and helping each other.

TVLINE | Well speaking of “family,” I almost feel like Dinah is a smart-ass big sister to Rene and Curtis.
[Laughs] For sure. I think Dinah is sort of used to being “one of the boys,” so she’s not afraid to tease them or play with them a bit and mock them. That’s definitely part of her character. 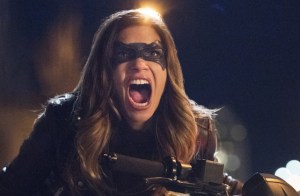 On set, are you actually screaming when doing the Canary Cry, or just popping open your mouth?
That’s a good question. In the shot that you’re talking about (right), I was definitely just mouthing it. A silent scream. But when we’re fighting and it already has that energy behind it, I will scream. You have to pick and choose your screams so you don’t blow your voice out.

TVLINE | I think it was Agents of S.H.I.E.L.D.‘s Chloe Bennet who said that it’s almost ridiculous to watch the filming of such scenes without the effects, where Daisy is just jutting her open palm at someone, looking angry.
It is! But one cool thing that they do on set is “blow people back.” So, nothing will come out of my mouth, but they’ll launch these dudes back like 15, 20 feet, which is really exciting. It does sort of feel like your really doing it in the moment.

TVLINE | Can we talk about the impracticality of Dinah’s wallet chain? I know it makes her look tough, but in close-quarters combat I’m just grabbing that and yanking her around.
[Laughs] You know, at a certain point it just gets annoying when you’re fighting dudes all day and you keep losing your wallet, misplacing your license. She’s over it. She’s a very practical, smart girl.

TVLINE | Whats the team’s next move against Adrian Chase? He just whacked the WITSEC guys and is now in the wind….
They’re on it. They’re on it. He’s in the wind, but something tells me that Team Arrow will find a way.  They want to get him, and I hope that they do. 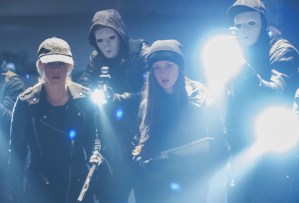 that the next episode (airing Wednesday, April 26) could just as well be titled, “Team Arrow vs. Team Felicity.” Talk about that a bit. How does that conflict manifest itself?
Felicity has a lot of really good ideas, and I think that she might want to exercise them — regardless of what the team thinks. Felicity is always helping out, she’s always doing what the team wants and she’s always a team player, but sometimes we have differences in opinion. She’s extremely intelligent, so…

TVLINE | Is this about Team Arrow and Felicity and the Helix kids having different ideas about how to get Adrian?
It does involve all of that, yeah. But it’s more than that. Helix is definitely involved in Felicity’s approach to how she thinks we can best catch Adrian Chase.

TVLINE | In photos, Helix is all uniformed up, Felicity herself has on a fetch cap…. Will there be a physical skirmish, or more a war of minds?
It’s going to be a bit of everything, because we have the whole physical aspect, where we’re obviously going to be fighting, while Helix is more into mental games. It’s going to be interesting. There are a lot of layers to the conflict.

TVLINE | And what can you tell me about the season finale? I heard Marc [Guggenheim] say it doesn’t even take place in Star City.
It does not. And it is epic. It is so much bigger than I thought, than I imagined it would be. It’s just amazing. When I read it, it almost felt like doing a film. It’s really exciting.

TVLINE | Does Dinah get to bust out any new moves? Are there any “firsts” for you as an actress over these last few episodes?
Yeah, there actually are! She’s coming into her own. She’s getting stronger, she’s getting better. 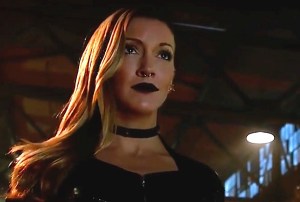 of course is due back by season’s end, and will be a regular for Season 6. Safe to say we’re fated for a Black Canary/Black Siren face-off at some point?
I actually don’t know if a face-off is in store, but that would be epic!

TVLINE | Lastly, how do you feel your reception from the fans has been? They can be a pretty particular bunch, and yet I actually feel like they’re OK with you — which often can be the highest praise.
They are, they really are. They’ve been incredibly welcoming and accepting…. I didn’t know what to expect after I found out what this job was, because it was bigger than I realized. The fact that they have been so gracious has been a blessing, because this goes back a long time, this story and these characters. They’ve been wonderful.