“So, so sorry to keep you waiting! But there were puppies.”

Supergirl’s Katie McGrath comes shuffling around the corner toward her setside trailer, having just made some furry friends over in hair-and-makeup. For someone so enigmatic both on-screen (Is Lena so different from brother Lex?) and off (Why doesn’t she have a birth date?), the Irish actress is wonderfully warm and welcoming, veritably champing at the bit to give her first in-depth interview since making her debut on the CW series last fall.

McGrath led TVLine on a quick iPhone tour of the puppies she just played with (peppered with some commentary on canine couture), before sitting for a cozy Q&A. Weeks afterward, she would earn a promotion to series regular for Season 3 — news she surely reveled in, given her girl crush on Miss Luthor, detailed below.

TVLINE | First of all, tell me what you’re shooting today.
What am I shooting today? We are on [Episode] 218, so it’s a storyline with Rahul [Kohli], from iZombie. He plays Jack Spheer, who is a love interest for moi.

TVLINE | Jack is Lena’s ex, though, right?
Yeah, but if there’s an ex, there’s still [with a flourish of the hand] frisson there, you know? We were together for a while. I feel very privileged that they thought enough 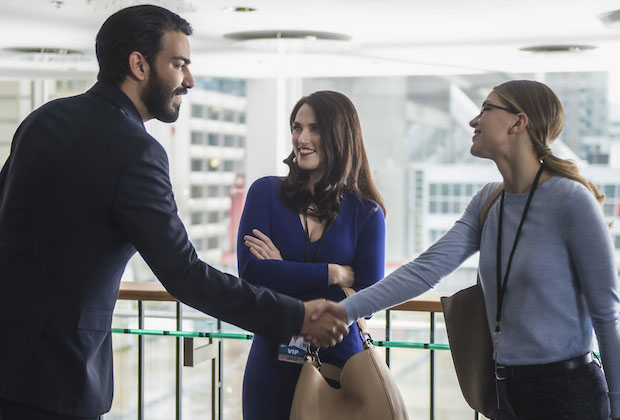 of my character to give me a hot man to play with for an episode (airing Monday, April 24, when Season 2 resumes).

TVLINE | It sounds like a big episode for you.
It is, actually. What’s nice about it is you’re getting quite a bit of backstory for me as a character. You haven’t really seen storylines for Lena outside of her being a Luthor and all the stories to do with her family…

TVLINE | It always seems to come back to her mom.
Exactly. Or her brother… all of that kind of stuff. And this is separate to that, which is nice. It gives you more of an insight of her as an individual rather than her as part of her family.

TVLINE | But as Lena reconnects with Jack, Kara (played by Melissa Benoist) gets to investigating one of them…?
There is the release of some new technology that to Kara seems a bit suspect and seems to be connected to a few dastardly dealings going on. She’s attempting to investigate it, on one hand, because journalistically she thinks that it’s interesting. And then on the other hand, she’s investigating it because she’s worried about me as her friend. So, there’s both of those going on.

TVLINE | So, you think Lena and Kara are friends at this point?
They’re like bezzie mates.

TVLINE | Yeah?
Yeah! Yeah! See, everybody’s got this idea that…. It’s always hard when you’re playing a character that everybody thinks is going to go one direction. They’re convinced she’s going to go down the road of Lex—

TVLINE | I’m not. But the two of them have bumped heads a bit.
No, but they bump heads like anyone. Don’t you ever bump heads with your friends? But they always come back to, you know, a place of mutual respect of each other.

TVLINE | What might Kara’s investigation do to that dynamic?
I can’t give away the ending. [Laughs] But ultimately, we’ve spent 18 episodes over the season building a friendship between the two of them, and it’s not going to be able to be destroyed in one episode. That’s one of the things I’m most proud of actually on this show, and I didn’t think that’s where it was going to go, because when I came in, I only came in for a few episodes. And [the friendship] has slowly and very realistically, I think, built up over this season. We’ve all put a lot of work into it and I’m glad that they’re taking the time to get there, and keeping it.

TVLINE | You were talking about how everything always loops back to Lena’s mom or the whole Luthor thing, but is there a bigger picture to ultimately be revealed? Might Lena have a scheme of her own percolating that we’re completely oblivious to thus far?
I don’t think so…. I think Lena is a very genuine person. What you see is what you get with her. She is honestly trying to do the best she can, and she is honestly a good person. That’s not to say that other people don’t use her for ills, because she’s the head of this company, she has all of these other relationships that people can manipulate — like her mother — and get her into these situations that…. A normal person isn’t going to be b put in jail by, you know, Cadmus with giant green ray guns! It doesn’t happen to people that are not a Luthor, but it’s how Lena reacts to it differently than the rest of her family which makes her interesting to play. You think she’s going to “be a Luthor” about something, but then she turns around and completely surprises you, which I guess is what makes her an interesting character to watch — and definitely an interesting character to play.

TVLINE | So, at the end of the season finale she’s not going to let out a maniacal cackle and say, “At long last, Project Leviathan can be unleashed!”?
You know, she might! I haven’t read the end of the [season], so anything is possible. [Laughs] She could decide to move to a giant moon made of cheese. I mean, at this point, who knows!

TVLINE | And tall.
[Nods] God. I swear. But just, like, perfectly, elegantly in proportion. [Sweeping her hand from head to toe] She’s like a dancer. It’s unbelievable. I then rock up like an Irish potato going, “This is great. I am so not your child.”

TVLINE | Have you worked with Jeremy Jordan lately? You two have had a couple of fun scenes.
I haven’t worked with him since our little meeting underneath the stage. It’s funny because I seem to play these characters, generally, that are separate from the main storyline. So most of my stuff actually is just with Melissa, which is really nice, and it always tends to be real character stuff…. Us sitting down talking about things that are important…

TVLINE | And it always passes the Bechdel Test.
Yes! Exactly. It does. It’s proper scenes between two women, do you know what I mean? And it’s rare, generally, that you get to do that on TV. I think that’s why the relationship resonates with so many people — and it’s definitely why I love to play it. 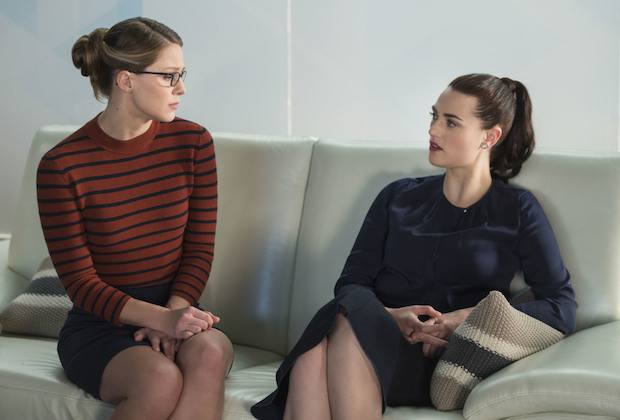 of the Lena/Kara relationship, what do you think about the whole “Supercorp” thing? You’re not out there on Twitter….
I’m not on Twitter, no. But I’ve had people tell me about it.

TVLINE | How does a person who’s not on Twitter hear about it?
Well, Melissa will tell me, or anybody else on set. My brother mentioned it a few times.

TVLINE | Do you remember the first time you heard the term, or who from?
Who did I hear it from…? I couldn’t even tell you…. I think it was Melissa, actually, who first told me. I’ve played quite a few characters that have either been gay or they’ve had, you know, some very obvious gay undertones, and to be completely honest, this was the first time I was like, “Well, this role doesn’t have any!” You’re laughing now — how naive was I? And then after the first episode… I go back and I watch and I was like, “Oh, yeah, now I can see it. That makes sense to me.”

TVLINE | On Buffy’s anniversary, I read an interview where Joss Whedon talked about people who would see lesbian subtext between his female characters and he at first was like, “What are you talking about?” But once he looked for it, he was like, “Ohhhh, yeah.”
It’s funny because sometimes it’s so obvious when you’re playing it. You read it and you’ve got the characters and you’re like, “Oh, yeah, I know this is going to happen.” And then there are other times… and [with Lena/Kara] honestly, it just didn’t even enter into my head. But then you get the response and you go back and you’re like, “Yeah, I can see where that came from.” It doesn’t bother me at all. I think it’s great, because what really makes me feel good is that they can see the characters are working on more than one level. Do you know what I mean? It’s not just what we put into it. It’s what the writers put in, and the directors, and then what people can take from it. It means that the characters we’re playing are not just one dimension, they work on so many levels.

TVLINE | You’re stirring people’s imaginations. You want to do that with a character.
Exactly. Of course, it makes you feel really good to know that what you’re doing is quality.

TVLINE | What’s your dream casting for Lex? If Katie McGrath could grab anybody to play Lex for one episode….
One episode? Bruce Willis, the most amazingly, good-looking, bald man there ever is.

TVLINE | I just saw him at the end of M. Night Shyamalan’s Split.
Right? Was he delicious? He’s delicious. He’d be a good Lex.

TVLINE | If you could give Lena one piece of advice, what would it be?
“Keep doin’ what you’re doin’. Don’t stop. Don’t second guess yourself.” She’s honest, she’s true to Kara, she’s true to her friends, she’s doing her best…. She’s trying, in the face of all the things people keep throwing at her, and all the expectations that people have, and she’s defying them.

TVLINE | You’re in love with Lena.
[Cocking an eyebrow] Wouldn’t you be…?

TVLINE | [Stammering, some blushing]
[Laughs] There is only one answer to that, and that is, “Yes, Lena’s a badass.”