And then there were 20. In The Voice’s final Knockouts of Season 12 Monday, the field of competitors was whittled down by another six vocalists, sending on, among others,Vanessa Ferguson and Lauren Duski to compete with our faves (Chris Blue, Casi Joy) in the Live Shows. How’d they manage to impress their coaches? And which of their teammates sang a premature swan song? Read on, and we’ll review.

Team Blake: Lauren Duski singing “When You Say Nothing at All” defeated Andrea Thomas singing “Cry” | After Andrea intimidated Lauren in rehearsals with her Mariah high note, Lauren landed back on solid ground as she practiced the Alison Krauss song to which she was so well-suited. On stage, Andrea sounded more than ready to stop singing backup for Carrie Underwood and start singing lead. But that high note… gads. It was more of a shriek. By contrast, Lauren’s understated vocals — heartfelt and nuanced and warm as your favorite blanket — worked gangbusters. She wound up making a much greater impact by singing a whole lot more softly. 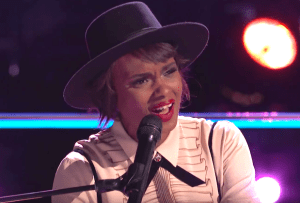 Team Alicia: Vanessa Ferguson singing “If I Were Your Woman” defeated Jack Cassidy singing “Unsteady” | Even in rehearsals, Jack was sounding nicely emotional — though Alicia thought he needed to loosen up and come unbound a bit more. Vanessa sounded like a million bucks — raw and intense — but again, their coach wasn’t satisfied. During their dueling-pianos Knockout, Jack definitely went for broke, as instructed, but the effect was sometimes froggy and out-of-control. Passionate, yes. But successful? Eh. During Vanessa’s turn, her experience showed, and when she tore into that chorus, it didn’t stand a chance. She absolutely shredded it.

Team Adam: Jesse Larson singing “The Letter” defeated Davina Leone singing “Toxic” | Davina scored points right off the bat in rehearsal by choosing to do her own sexy, slowed-down version of the Britney hit. Then, Jesse reminded their coach that he’s a “beast” by growling Joe Cocker with admirable control. On stage, Davina’s “Toxic” still seemed like a hot idea. Trouble was, she hit so many bum notes that that hot idea quickly got lukewarm and ultimately left me cold. (Imagine what Lilli Passero could do with that arrangement of the song.) When Jesse took to the stage, he did so like a man possessed, his razor-blade howl in full effect. So, in the end, this match-up wasn’t even a contest. 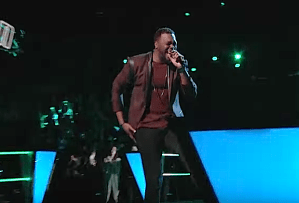 Team Gwen: JChosen singing “Without You” defeated Brandon Royal singing “Redemption Song” | In rehearsal, J revealed that after the Blinds, his mom had had a stroke, and it was to her that his emotional rendition of the song was dedicated. Brandon, meanwhile, dared to take on Bob Marley — and sounded pretty good doing so, too. He was first up in the Knockout, and sang with a sweetness and strength that was hard to resist. When J took his turn, he displayed greater range, on one hand. But on the other, his vocal got away from him a time or two. Ultimately, let’s be real: There was almost no way, regardless of how J sang — and he was fine, just not remarkable — that Gwen could possibly cut him while he was going through what he was in his personal life.

Team Blake: Aliyah Moulden singing “Before He Cheats” defeated Caroline Sky singing “At Last” | In rehearsal, nerves were getting the best of Aliyah, who also seemed to have made a mistake by choosing a song that was a little mature for her. It appeared destined to be a deadly combo. By contrast, Caroline came off pretty calm, cool and collected, and “At Last,” while a daunting number, suited her to a T. During the Knockout, to my surprise, Aliyah pulled it mostly together, belting with the power for which she’s known. There was an off note here and there, but overall, it was a performance that made you sit up and go, “Huh. She’s got something, this kid.” Caroline, in turn… good God. WTF happened? She started off on the wrong foot, then just kept on stumbling. Disasterville.

Team Gwen: Troy Ramey singing “Chandelier” defeated Stephanie Rice singing “Safe and Sound” (Stephanie stolen by Alicia) | This was probably the softest, most reined-in singing we’ve heard so far from Stephanie — and it was a risk, since she’s been so closely associated with raw, gritty vocals and the honesty they imply. But the gamble paid off — she not only sounded lovely, she managed to show off another facet of her talent, too. Troy knew he’d given himself a challenge with the Sia smash, and struggled in rehearsal with sticking to the melody. On stage, he poured on the passion, but to me, sorry, it was like the Nickelback cover of “Chandelier” that nobody had ever asked for. Bad call, Gwen.

Oh, and in an abbreviated Knockout, Mark Isaiah defeated Malik Davage to retain his spot on Team Adam. So, what did you think of Monday’s Knockouts? Best and worst performances? Hit the comments.