Not ready to say goodbye to Girls yet? Well, turns out you’ve already said goodbye to two of the main characters — whether you knew it or not.

Jemima Kirke’s Jessa and Zosia Mamet’s Shoshanna won’t appear in next Sunday’s series finale (HBO, 10/9c), according to an Instagram photo that star/creator Lena Dunham posted (and later deleted) on Monday. Next to a trio of photos of Kirke and Mamet together, Dunham’s caption confirmed that this Sunday’s penultimate episode was the last for the two actresses, thanking them and celebrating “this insane Hepburn/Tracy Laverne/Shirley energy” they had “that just made us laugh so hard and feel so much.”

In Sunday’s episode, “Goodbye Tour,” Shoshanna revealed she’s now engaged (to a guy we’ve never seen) and basically disconnected herself from the rest of the group. At her engagement party, Jessa apologized to Hannah for “everything” (including the whole messy Adam situation), and the four girls danced — though, it should be noted, not with each other. 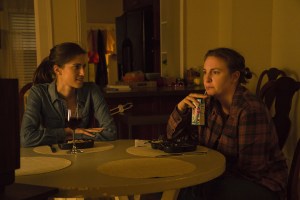 So with Jessa and Shoshanna out, what does that mean for Sunday’s finale? One advance photo HBO has released features Dunham’s Hannah (who’s moving upstate to teach at a local college) hanging out with Allison Williams’ Marnie, and we know Hannah’s mom Loreen (Becky Ann Baker) also makes an appearance. But what about Adam? Elijah? Ray? Guess we’ll have to wait until Sunday to find out… unless Dunham posts on Instagram again, that is.

Will you miss Jessa and Shoshanna? And what are you hoping to see in Sunday’s Girls finale? Hit the comments with your predictions.