No, Jimmy McGill didn’t get fitted for an orange jumpsuit in Monday’s Better Call Saul premiere… but his various indiscretions, big and small, are starting to catch up with him. 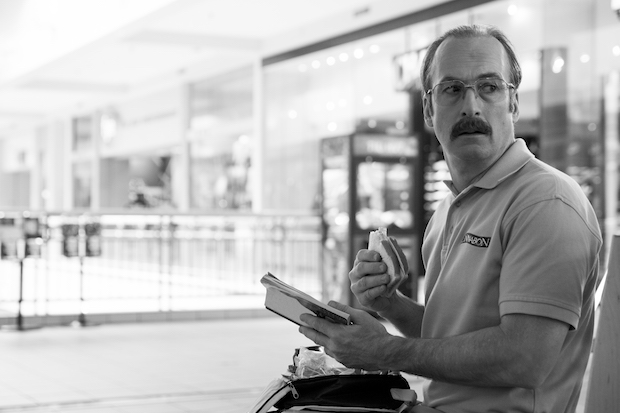 Season 3 kicks off, like the last two did, with a black-and-white prologue following Jimmy/Saul’s post-Walter White life as Cinnabon manager “Gene.” We watch as Gene sadly hauls bags of sugar and sadly glazes cinnamon buns before taking a sad lunch break on a sad mall bench. A young shoplifter runs by him and hides in a photo booth, and when the cops come by, Gene meekly rats the kid out. But while they’re taking him away, Gene suddenly yells out to him: “Say nothing, you understand? Get a lawyer!” And back at work, he faints while glazing a fresh batch of buns. Is his old life as Saul Goodman creeping back in?

Then we head back to right where Season 2 left off, with Chuck tricking Jimmy into admitting he fraudulently altered the Mesa Verde documents. While Jimmy steps out to call Howard, Chuck retrieves the hidden tape recorder that captured Jimmy’s confession and locks it away. When Jimmy returns, Chuck is removing the reflective material covering his windows. Jimmy pitches in and comes across an old children’s book, leading to some boyhood reminiscences from the brothers. But Chuck isn’t feeling real brotherly towards Jimmy. “Don’t think I’ll ever forget what happened here today,” Chuck tells him ominously. “And you will pay.” 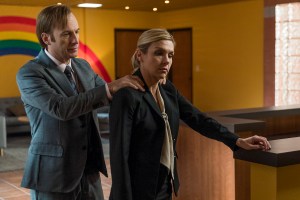 Back at their new two-person law firm, Kim is holding down the fort in Jimmy’s absence, ironing out wills and haggling with elderly clients. Jimmy returns and thanks her with a shoulder rub: “You are a superhero.” He tells her he settled things with Chuck, but she reminds him that she doesn’t want to know any details about that whole mess. Meanwhile, Chuck plays the recording for Howard, who calls Jimmy “a world-class son of a bitch.” (Can’t argue with that assessment.) He says the tape’s inadmissible, though, and can’t imagine how they’d use it against Jimmy. Chuck can, though.

Jimmy’s fast and loose relationship with the truth comes back to haunt him again when the Air Force guy he conned into letting him onto the military base to shoot his commercial last season shows up at the firm. He knows Jimmy’s a fraud: “Every word out of your mouth is a damn lie.” (Can’t argue with that, either.) Jimmy frantically defends himself, citing “artistic license,” and when the military man threatens to expose him, Jimmy basically dares him to, saying he’ll win in court. The Air Force guy backs down, but he leaves Jimmy with a dire prediction: “The wheel is gonna turn. It always does.”

Kim is putting the finishing touches on the Mesa Verde documents, and the client is pleased at how fast she was able to clean up Hamlin, Hamlin & McGill’s “mess.” She can’t stop herself from making little tweaks to the documents, though; we see her changing a semicolon to a period, then to a double hyphen, then back to a semicolon. (Ah, the agony of the written word!) But this is really just to set up how devastated she’s going to be when Jimmy’s big lie comes to light, right?

Yeah, about that: When the batteries on Chuck’s tape recorder run out, he gets law-firm lackey Ernesto to replace them — but when he does, Jimmy’s incriminating conversation starts playing, and Ernesto hears it. Chuck yells at him to shut it off and tells him he can’t breathe a word of this to anyone: “There could be terrible consequences.” You mean for you, Chuck? Still, I have a nagging feeling this is all leading somewhere ugly for Jimmy… and poor unsuspecting Kim might get caught in the crossfire. 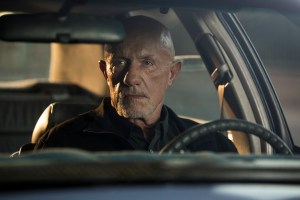 GAS PUZZLER | Our favorite laconic hitman Mike Ehrmantraut is still reeling from that mysterious “DON’T” note someone — with the initials G.F.? — left on his car telling him not to kill Hector Salamanca. He takes the car to an auto-parts garage and tears the thing apart (literally) looking for a tracking device. He comes up empty… until he pops open the gas cap and finds a tiny tracker inside. He goes home and finds the same device inside the gas cap of his other car that’s parked on the street. He takes the serial number off the device and has a black-market pal of his get him a new tracking system just like it.

The system comes with a walkie-talkie receiver which, when enabled, follows the tracker with a radar-like map and tells you how many meters away it is. Mike — smart cookie that he is — puts the new tracker he just bought in his own car’s gas cap and drains the battery on the old tracker. Then he sits by his window to see what happens, snacking on some shelled nuts while he waits. In the dead of night, Mike watches an unidentified guy pull up next to his car, unscrew his gas cap, retrieve the device and drive off. Then Mike switches on his receiver. Now he’s tracking them! He gets into his car and drives off in pursuit. Oh, whoever you are, you picked the wrong old man to mess with.

* No, we didn’t witness the much-ballyhooed return of Breaking Bad baddie Gus Fring in the premiere… but we know he’s coming. He’s the guy behind the “DON’T” note, right? Maybe that tracker will lead Mike right to him.

* The book Gene was reading while eating his lunch: The Moon’s a Balloon, the memoir by esteemed British actor David Niven. Maybe he’s getting tips on how to pretend to be someone else?

* The Quote of the Week came when Jimmy responded to the Air Force guy’s accusation that the old man he brought onto the military base wasn’t actually a war veteran: “Neither was Tom Cruise… and look at what Top Gun did for you!”

* Kind of love that Mike was on screen for half the episode, and he might’ve uttered twenty words total in that time. That’s so Mike.

Time to weigh in, Better Call Saul fans: Give the premiere a grade in our poll, then hit the comments with your thoughts.