Between the horrors of the Baby Jane shoot, Joan’s Oscar-night stunt, and her and Bette’s natural antipathy, you would think that the last thing either of them would ever do would be team up again. But desperate times call for desperate measures. So, with the mortal enemies’ stars fading down to mere flickers, Sunday’s FEUD: Bette and Joan found Davis and Crawford signing on to headline Bob’s new thriller, What Ever Happened to Cousin Charlotte? How did it go? As if you don’t already know the legend, read on…

‘DON’T PANIC, BUT A MADWOMAN IS LOOSE IN THE THEATRE!’ | As “Hagsploitation” began, Joan was suffering through a gimmicky promo tour for Strait-Jacket with its director, William Castle (John Waters), entering movie houses swinging an axe as fans threw popcorn at her. It was so humiliating that the Oscar winner not only snapped at Mamacita — “You’re a servant! Don’t ever forget that!” — she hurled at her companion a vase full of congratulatory flowers sent by George Cukor! “I tell you now this,” Mamacita warned afterwards. “The next time you throw something at my head, I leave you.” (Still, Joan’s one loyal friend cautioned her to be careful going up the mansion’s stairs. “You’re blotto,” she noted. Now that’s love.)

Later, Hedda paid Joan a visit and revealed that she’d recently had a heart attack. (Hedda had a heart? Seriously?) What’s more, it likely wouldn’t be long before another one killed her. That being the case, she’d been reflecting on her life’s work and all of the people that she’d ruined. “I felt good,” she decided, “that I’d contributed to our moral economy.” But, since Hedda considered herself so righteous, she couldn’t ignore the whispers that Joan had once starred in a stag film called Velvet Lips. If Joan wanted to come clean, Hedda would let her turn “the tale of shame” into one of redemption. “It’s always better to cooperate,” the gossipmonger threatened. Still, Joan wouldn’t confess.

‘TEARING DOWN YOUR IDOLS… IT’S VERY SATISFYING FOR AN AUDIENCE’ | At Warner Bros., Jack — feeling that he’d invented the hagsploitaton genre — was fit to be tied over Strait-Jacket‘s success. So, even though he’d had Bob banned from the lot, he called for the Baby Jane director and admitted that, it being the twilight of his career, “I need a miracle.” And it just so happened that Bob had one: What Ever Happened to Cousin Charlotte? Aldrich wanted Bette to play the aging Souther belle and Ann Sheridan to play the city-slicker cousin who gaslights her. No way, said Jack. It had to be Crawford! When Bob argued that they’d never agree to work together again, Jack pointed out that “if you think it’s twilight for us, it’s midnight for them!”

At first, Bette and Joan predictably scoffed at Bob’s suggestion that they reteam. But then, of course, they wound up agreeing — if Davis could have creative control and Crawford could get top billing and a signing bonus. “Every time I agree to a back-end,” she noted, “that’s exactly where I end up getting it.” And Joan was once again in especially dire need of cash — this time to pay off brother Hal, who she’d guessed right away was the individual shopping around Velvet Lips all over town. When the sleazebag complained that she’d only given him half of what Louella Parsons was offering for her dirty little secret, she told him to go ahead and ruin her if he wanted.

‘I CAME HERE TO GET MY BALLS BACK… YOU HEAR ‘EM CLACKING?’ | With Davis and Crawford on board Cousin Charlotte, Jack was thinking that it could be even bigger than Baby Jane. So did Zanuck , Bob told him. And, since Zanuck treated him with at least a modicum of respect, that was with whom he was going to be making the flick! Or at least trying to make it. Tensions ran high before the first table read had even begun. When Joan gave Bette a box of matches — symbolically to burn the pages of their past — Davis asked if she could use them to set her on fire. But after Joan apologized if Bette had been offended by “what happened” on Oscar night, the rivals agreed to present a united front to Bob and speak with one voice — “preferably mine,” Bette added.

Unfortunately, their united front fell apart before the table read had even gotten as far as page 2 of the script. After finding herself unable to resist taking a jab at Strait-Jacket, Bette became so disgruntled that Bob hadn’t incorporated her revisions that she walked. “And change the goddamn title,” she yelled on her way out. In her absence, Joan offered to read both parts. Later, she went to the hospital, where Hal was having his appendix removed, and paid him her advance in such grand fashion that he felt the need to analyze why she had to be a showoff: Back in Kansas, he’d been the golden boy; she, the runt mom hadn’t wanted, and that was how she’d always see herself. Whether it was true — and it probably was — at least he agreed to keep Velvet Lips to himself. 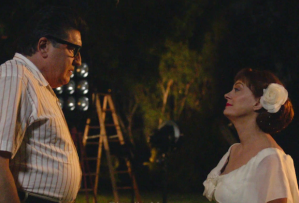 ‘WE’LL BE ALONE TOGETHER’ | By the time Joan arrived home, Hal was dead — his appendix exploded, Mamacita informed her. When Joan didn’t break down, but instead immediately called to cancel the check that she’d written her brother, Mamacita suggested that “sometimes when the emotions are too many, we cannot cry.” (As if.) On the plus side, she went on, now Crawford didn’t have to do Cousin Charlotte with Bette. Oh, but she did have to, Joan responded angrily. “If I’m not working, I might as well be dead!” Meanwhile, on the Baton Rouge set of Cousin Charlotte, Bette happened upon Bob in tears because Harriet was divorcing him. He didn’t know how to be alone, he said. It’ll be OK, she replied. She’d been there, done that — four times. They’d muddle through together.

When Joan and Mamacita arrived in Baton Rouge, the stage was set at once for disaster. First, there was no driver to greet them at the airport. Then, Joan’s suite wasn’t ready. When they finally got into their room, Mamacita groused that there was no complimentary gift basket — and they’d been put next to the garbage. Surprisingly, Joan remained “determined to enter this project with the proper spirit” — until, that is, she phoned Bob’s room to let him know she’d arrived… and heard Bette laughing in the background!

What did you think of “Hagsploitation”? How perfectly cast was Waters as William Castle? Hit the comments.