NCIS: Los Angeles‘ Kensi Blye has got moves, as we’ve seen in any number of action and fight sequences over the years. But this Sunday (CBS, 8/7c), viewers will lay witness a whole new side to the Special Agent, as she goes undercover as a salsa dancer.

TVLine invited Daniela Ruah to share how the storyline came to be (including the “baby bump” it hit along the way), reveal what smooth move of his own Deeks may have to show off and take us behind-the-scenes of Kensi’s holiday “brawl” with Anna Kolcheck.

TVLINE | What sets the stage for this dance episode?
I asked myself the same question, when our writers told me there would be a dance episode — “Howwww are we going to make NCIS agents dance? What’s the purpose?” Basically, there’s a guy who works at this Cuban club and he is upset that his wife is selling government secrets to foreign agencies. He’s also very bitter because she’s divorcing him, so he decides to pin this on her, which brings us to the club he works at, because we have to investigate both sides of it. I end up going undercover as a salsa dancer.

TVLINE | What is Kensi’s reaction to the assignment?
I think she’s actually pretty excited. She dances with her girlfriends on weekends, which is what she tells the guy shes auditioning for — and he’s very arrogant with her, like, “I don’t have the time for this.” But she’s like, “Just give me a chance,” and he does, and he likes what he sees. That allows her to infiltrate and spy on the place a bit.

TVLINE | How much of a heads up did you the actress get?
I got a lot of heads up and I’ll tell you why: Late last season, [consulting producer] Joe Sachs — a very adventurous writer who wrote the episode where Kensi and Deeks wind up in the house with the giant Tesla coil that they have to deactivate — told me, “There’s 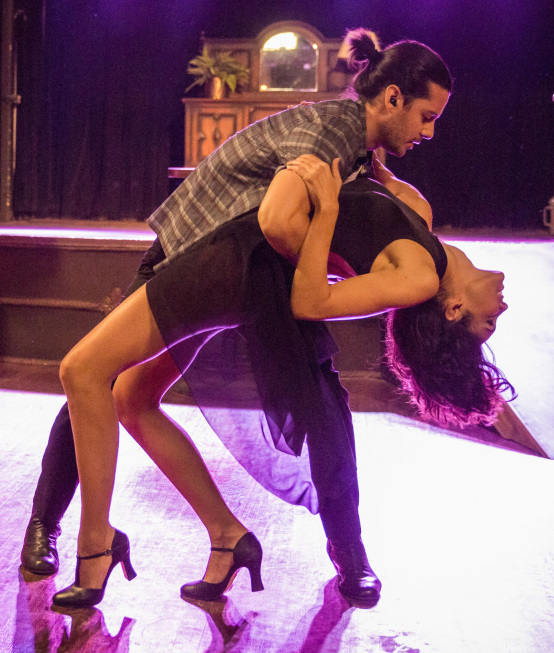 this episode where I want you to dance salsa.” I was so excited, but when he told me this I had just found out that I was pregnant with Sierra [who was born in September]. I was thinking, “Oh my gosh, this is never going to work because I’m going to be super-pregnant.” It was too early to tell anybody at that point, so I smiled and said I was looking forward to it, then I ended up telling Joe I was pregnant. And he was so sweet, and so were the producers — they ended up pushing it to the end of this season, when they knew I would be able to dance again.

The guy that I dance with, George Akram, he’s a Broadway performer who a few months before we shot the episode had come off of playing Bernardo in the West Side Story revival, so he’s a triple threat kind of performer! It made me feel very comfortable that I was dancing with somebody who actually knew what they were doing. I have a tendency to take the lead on things, so I was happy I didn’t have to.

TVLINE | So, we’re going to see 100-percent you? No Flashdance-style switch-outs?
Oh yes, it’s all me dancing. It’s all me. There’s even a little sneak peek where Kensi auditions (watch clip below).

TVLINE | What is Deeks up to during Kensi’s comparatively sexy undercover gig?
He may or may not be the [night club’s] bathroom boy. [Laughs] There are a couple of funny scenes where of course he’s not too happy about the proximity of dancing hips between Kensi and this other guy. There are some really, really funny moments where he interrupts à la Deeks.

TVLINE | He still owes Kensi a proper proposal, right?
There is a proposal owed, and there is a proposal by the end of the season — but I’m not going to give you details, because it happens in quite a lovely way. Deeks didn’t want Kensi to expect whatever the proposal would be, and I can tell you that the way it  is definitely surprising.

TVLINE | Looking a bit further down the road, I see an episode where Admiral Chegwidden (played by JAG‘s John M. Jackson) comes back, and the team has to work with a trio of Hetty’s Vietnam War colleagues (including guest stars James Remar and Carl Lumbly) on a case.
Yes! That was really fun. I was partnered up with [John] for a while and it was really nice to work 1-on-1 with him. Even though he plays this very serious character, you kind of get this “grumpy old men” trio in a way. You have these super-experienced guys who have seen it all, while we’re all the younger version of them in a way, gaining all this experience. I love when renowned, experienced actors come in — it’s this whole other ballgame, to talk with them and hear their experiences from the world of Hollywood. To see where they’ve come from, hear how things have changed….

TVLINE | When Chegwidden showed up during the mole hunt climax, I felt like he fit right in, like an old shoe.
I agree with you. I agree with you. And I also love how they’re calling back all the way to JAG, the original mothership. Actually, some of the crew member at NCIS came from JAG, and I wouldn’t be surprised if we carried some of them over to us. It’s not just the characters or the storylines or the agency or the Navy connection, it goes beyond the fiction into reality, which is really cool.

TVLINE | I didn’t see you at the TCA party in January, because you were working, but I was telling everyone I nearly fell hook, line and sinker for the Kensi/Anna “fight” in the Christmas episode (watch clip above).
[Laughs] You can’t even imagine everybody’s reaction when they read it on paper. You’re like, “Wait, what?? This is ridiculous. What?” It was so absurd. And then when you read the rest of it and realized it was her imagination, it was a relief.

TVLINE | It must have been fun to shoot.
It was so fun to shoot; Bar [Paly, who plays Anna] and I get along so well, I love her and it’s always wonderful when she comes on the show. And she has such great chemistry with Chris [O’Donnell]. And it’s a totally different potential love story than what Kensi and Deeks are, it’s a different phase. They had that whole scene in front of the fireplace, this hot, sexy thing — which Kensi and Deeks are past now.

TVLINE | Hey, don’t you go making Kensi and Deeks sound like an old, married couple.
No! No, no. That’s not what I mean. They’re not an old, married couple by any means. But I personally believe that you don’t know if you love someone until you’ve been through ups and downs, where people’s real colors show. You can feel infatuated, you can feel excited about someone, but until you really get to see their true colors and see how they react to that, for me, I’m not able to fully fall in love. I think that Kensi and Deeks have been through more than their fair share of obstacles, where if it’s Kensi going through something, the way that Deeks supports her, she can safely fall in love with him, because he’s going to be there no matter what. And she obviously is never going to leave his side no matter what he does.  That’s how I view love, and the writers and producers have created this environment for these two characters that makes it unconditional, I think, at this point.