With just one episode of Homeland left this season, we’ve still got quite a few mysteries left for Carrie and company to untangle. But Sunday’s finale (Showtime, 9/8c) does resolve one thing: Keane is officially President now!

All season long, as President-elect, Keane’s hands have been tied on all matters foreign and domestic. But in the photo above from the finale, Carrie and Keane face each other in the White House, which indicates that we’ve finally made it past Inauguration Day. That means all their problems are over, right? Well…

In the photo below, Carrie stares at her phone in an elevator, brow furrowed, with Keane behind her. Hmmm… something tells us they’re not checking Instagram. 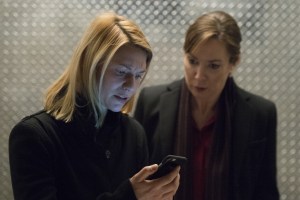 We get a little more context for that photo from the preview for the Season 6 finale, which you can watch below: Carrie shuts down the elevator and tells Keane, “They’re jamming all signals… we’re in a kill zone.” Then the elevator doors open, and a man points a gun in Carrie’s face. (That’s probably Quinn, though, right?)

Also in the preview: Carrie and Quinn rush off from the site of the Queens bombing when Carrie says, “I think I know where that special-ops team is headed.” (For Keane in New York City?) Quinn gets framed by military men for an assassination attempt on Keane. And Dar tosses a bucket of water on a stripped-down senator he’s seemingly kidnapped.

Will Carrie bring Dar Adal to justice? Will Quinn survive? (Duh, of course he will. He’s immortal.) And most important of all: Will Carrie get Franny back??

Got predictions for Sunday’s Homeland finale? Share ’em in the comments below.