The Agents of S.H.I.E.L.D. — or at least Daisy and Jemma — returned to a strange, new world this Tuesday, as the ABC drama launched its third and final pod of Season 4, set in the Framework fashioned by Aida.

Who is friend, who is foe in this code-based reality? And how is Jemma any part of it, seeing as our first glimpse of the Framework showed us (gulp!) her grave marker? Here’s a character-by-character peek inside this topsy-turvy… matrix.

DAISY emerged from the bathtub to find not “boyfriend” Lincoln in her bed, but Grant Ward — whom she instinctively tried to “quake,” only to discover she is powerless in the Framework. Just barely covering her tracks as “Skye,” the two rode into work together, to a Hydra Triskelion in D.C. There, an extra-prickly May tasked Skye with interrogating an Inhuman that Daisy knew to be Vijay Nadeer, though he had been outfitted with a very good fake ID. To satisfy May’s need for intel on the pro-Inhuman resistance, Daisy “outed” Vijay, and then later tried to help him — only to get him captured by Hydra’s nefarious “Doctor.” 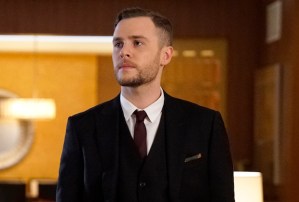 borderline-creepy FITZ is “The Doctor,” who has a frightening contraption used for testing suspected Inhumans. He wonders for moment about Skye letting a prisoner get away from her, then later seems to take a special interest in a “subversive” female who confronted teacher Phil Coulson with some wild theories.

That female, of course, was JEMMA, who we first saw literally climb out of not a well-manicured grave but a Potter’s Field outside the shuttered S.H.I.E.L.D. Academy, where until now she had been reported as one of many casualties of a “lab accident.” Looking exactly like she just crawled out of the ground, and with no proper ID, Jemma at first runs into some trouble hitchhiking, and then gets cornered by some curious Hydra agents at a diner. She fights her way free, though, then drives off with their car. Thanks to some “rogue code” — a spray paint-happy Resistance member — Jemma is led to seek out an old friend….

COULSON is a school teacher, seen drilling students with anti-Inhuman rhetoric, until class is interrupted by Hydra agents sent to drag one of his mild-mannered students away. Afterward, Jemma shows up and does her exasperated best to explain to Coulson the Framework reality he is trapped in, but all she gets for her effort is him tipping off Hydra. That said, Coulson later flips through some files that include vague doodles of the S.H.I.E.L.D. emblem, a newspaper clipping about a cellist and a postcard for Tahiti, followed by lines and lines of “It’s a magical place” scribbled over and over again. 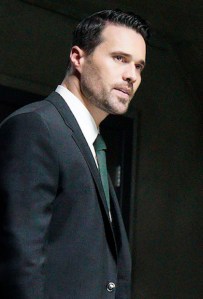 Jemma and Daisy rendezvous at the agreed-upon exfil point, only to be targeted by Hydra henchmen. To their own amazement, they are rescued by WARD, who reveals himself to be a member of the Resistance. (“Once a mole, always a mole,” Jemma marvels.) Ward drives them to a safe house, then sets out to torch the car while the ladies duck inside to activate their exit plan — except the remote gizmo doesn’t work. They are left stranded in the effed-up Framework, because someone is blocking their signal.

That someone is MADAME HYDRA fka AIDA, a super-villainous incarnation of the android crafted by Radcliffe. Sensing that something was afoot, she tells Fitz that she “eliminated the loophole” allowing for the subversives’ escape. Fitz is itching to go after the two, but Madame Hydra refuses to let the genius be distracted by pesky “criminals.” As she explains, “Anger won’t solve this. We need your creativity” — a sentiment she punctuates by pulling him into a warm kiss :-O

But maybe all is not lost for Daisy and Jemma? In the hour’s “bonus scene,” the former pops up in the back seat of Coulson’s car, where she repeatedly beseeches the teacher to “remember me.” After all, she notes, “You’re person I go to when things get heavy. You’re the closest I have to family.” A moment after hearing that, Coulson turns to the not-so-strange stranger and says, with a glimmer of recognition, “Daisy…”?

What did you think of the Framework arc’s launch?