Starting its Season 12 Knockout Rounds Monday, The Voice threw a curveball at its contestants, allowing the pairs who’d be competing with one another to keep their spots to watch each other rehearse. Mind you, I’m not sure how big a curveball that really was since they’d all certainly gotten to see what their opponent-of-the-week was up to/capable of during the Battle Rounds. And could it possibly have been any more awkward than sitting on stage and idly observing as your rival sang their ass off in hopes of sending you packing? Anyway, the twist did manage to rattle a coupla vocalists. But did it throw them off their game so much that they went down for the count? Read on.

Team Alicia: Chris Blue singing “Superstition” defeated Quizz Swanigan singing “Chains” (Quizz stolen by Gwen) | Though Chris paid lip service to Quizz’s talent making him nervous in rehearsals, his voice fit the Stevie Wonder classic like a pair of shades. And good God, does that guy have stage presence! I wasn’t nuts about Alicia’s “modern” breakdown mid-song, but still, he was just an impossible act to follow. When Quizz nonetheless had to perform after him, he exhibited great charisma and a strong, promising voice. Thing was, Chris’ voice was already a promise kept.

Team Adam: Hanna Eyre singing “Bleeding Love” defeated Autumn Turner singing “Respect” | In rehearsals, young Hanna came off a bit more anxious about her competition than did girl-group veteran Autumn (who was complimentary but not exactly thrown). On stage, while she’s no Aretha — no one is — Autumn demanded R-E-S-P-E-C-T with a gutsiness that I’d give a B (maybe a B-M-I-N-U-S — she’s no Felicia Temple, either). Then Hanna took her turn, singing with at times impressive clarity, at times… er, not. Between her shakiness and lack of stage presence — adorable doesn’t count as stage presence, does it? — she seemed a shoo-in to be sent packing and yet wasn’t. 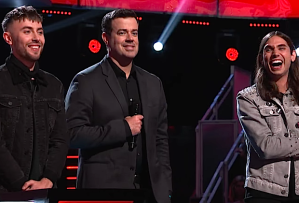 Team Gwen: Hunter Plake singing “I Want to Know What Love Is” defeated Johnny Gates singing “Million Reasons” | Even though rewriting hits is one of the coach’s pet peeves, Gwen couldn’t resist Hunter’s modernization of the Foreigner smash in rehearsals — with good reason: It was pretty awesome. On stage, Hunter knocked it out of the park, his haunting rendition largely lacking the cheese that’s ordinarily served with the original. In his turn in the spotlight, Johnny started off as mumbly as Bob Dylan, but was soaring by the time he reached the chorus, making this Knockout a real fight, albeit one he was destined to lose. The combo platter of Hunter’s emotion-packed voice and his inventiveness overcame even Gwen’s dislike of revamped classics.

Team Blake: Casi Joy singing “My Church” defeated Felicia Temple singing “My Heart Will Go On” | Listening to Casi rehearse, Felicia suggested that she was a pro at “how to give people a heart attack.” But maybe the lady doth protest too much — she packed enough power into her Celine Dion cover to turn an iceberg into a Slushee. On stage, Casi attacked the Maren Morris hit she was covering with a polished growl that was the equivalent of a mic drop. She was every inch, every note, a star. Up second, Felicia… uh-oh. My beloved Felicia got off to a wobbly start. She recovered on the big notes, especially her dazzling, long last one. But by then, it was too late. Casi had nailed it; Felicia, at best had stapled it.

Team Adam: Josh West singing “Carry On Wayward Son” defeated Johnny Hayes singing “Statesboro Blues” | In rehearsals, Josh was wisely intimidated by Johnny’s authentically raspy voice — some things, even amazing rock hair just can’t beat. During their Knockout, Johnny sounded so at home spitting gravel on the Allman Brothers Band hit that he might as well have had his mail forwarded there. (And that last note… da-amn!) In Josh’s turn, he sounded — as he did, I recall, during his Blind Audition — more theatrical than rock. He put a lot of power behind every note, sure — and delivered a memorable kick — but overall came off more Rock of Ages than rock-‘n’-roll. So you can imagine how loudly I yelled “What?!?” when Adam dismissed Johnny instead. I repeat: What?!? 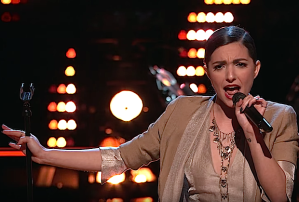 Team Alicia: Ashley Levin singing “Fancy” defeated Lilli Passero singing “Tears Dry on Their Own” (Lilli stolen by Adam) | In rehearsals, Ashley slayed as soon as she connected with the emotion of the Reba hit; Lilli got what Alicia called “a million percent” better once she drunked up the Amy Winehouse classic. On stage, Ashley was fine, but (sorry) mostly just fine, until toward the end of her number. When she decided that it was time to go for broke, she lost control of her vocal and sounded like she had pulled a muscle. By contrast, Lilli looked and sounded entirely in her element — as Blake pointed out, like she was doing what she was born to. Her performance was jazzy and sultry, and went down as smoothly as a second glass of vino. So again, I found myself yelling, “What?!?” and even, “WTF?!?” when Alicia chose Ashley over Lilli, leaving the singer who’s probably my fave (along with Chris Blue) free for Blake and Adam to fight over.

OK, your turn. Who did you think gave the night’s best and worst performances? Have you singled out a Season 12 winner? Hit the comments.