It may have taken 24 seasons, but Dancing With the Stars finally brought Las Vegas to the ballroom floor on Monday night, offering up 11 Sin City-inspired routines.

The good news: Several of Monday’s performances were so impressive, they’ll inevitably be rewatched on YouTube for weeks to come.

On the other hand… not unlike the happenings in Vegas, much of what transpired on the dance floor Monday night is best left undiscussed forever. (At this point, I actually do pity Mr. T a little bit.)

First, let’s break down the evening’s strongest and weakest numbers:

BEST OF THE NIGHT
Normani Kordei and pro Val Chmerkovskiy (Foxtrot) — Even though she’s competing alongside firecrackers like Simone Biles and Heather Morris, Normani has now proven in back-to-back episodes that she’s in a different league than her fellow contestants. Effortlessly shaking off more jet lag from her recent trip to Hong Kong, the Fifth Harmony singer turned in a highly seductive (and hugely entertaining) foxtrot, with choreography so well-executed that it’s easy to forget Normani is a ballroom amateur — and only 20 years old, at that. Judges’ Score: 34/40

BEST OF THE NIGHT (RUNNER-UP)
Heather Morris and pro Alan Bersten (Tango) — Confession: The conspiracy theorist in me is a tad bit suspicious that Heather just happened to be given the Britney Spears jam “Toxic,” after playing a Britney-obsessed character on Glee for six seasons — including an episode in which she literally embodied Ms. Spears. But, putting aside the producers’ potential favoritism, Heather finally delivered the near-flawless routine we’ve been expecting from a seasoned dancer like her. Not only was she technically strong (and as fiery as her onetime boss, Beyoncé), but Heather forged a chemistry with Alan that was playful, flirtatious and wholly fun to watch. Judges’ Score: 33/40 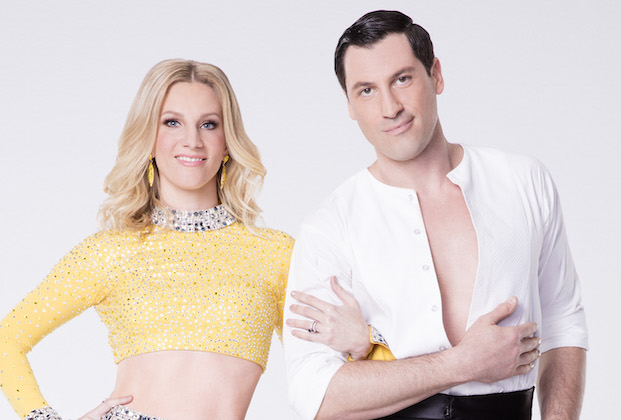 BIGGEST DARK HORSE
Nancy Kerrigan and pro Artem Chigvintsev (Samba) — With every week that passes in Season 24, Artem seems more and more relieved that he was paired with an actual Mirrorball contender this time, rather than past duds like Mischa Barton and Maureen McCormick. And the Dancing pro has every reason to be thrilled — especially after Nancy rose to the occasion of this sexy, sassy samba. Even though the Olympian could have come off sheepish and unsure of herself (which has happened before), she instead brought power and confidence to every step. (I will, however, give a pile of demerits to judge Len Goodman for telling Nancy that her “bum was bouncing around like a ball on a roulette wheel” during the number. Icky!) Judges’ Score: 33/40

WORST OF THE NIGHT
Bonner Bolton and pro Sharna Burgess (Charleston) — From a technical standpoint, it’s obvious that bottom-of-the-leaderboard staples like Charo and Mr. T are struggling much more than Bonner with actual choreography. But after Monday’s episode, the pro bull rider ranks lowest because I wanted him to be so good, especially after his intimate performance with Sharna last week. It’s clear he’s got a decent sense of rhythm and musicality, in addition to his off-the-charts chemistry with Sharna. And yet, this jive — a dance style that’s defined by its high energy — lacked any real enthusiasm, and Bonner’s footwork was all over the place. He’ll likely redeem himself next week with an emotional Most Memorable Year performance, but Monday’s jive was certainly a setback in his dash to the winner’s circle. Judges’ Score: 24/40

With that, I turn it over to you. Did Charo and Keo deserve to get the boot? Drop a comment below with all of your thoughts on Monday’s episode.