This week on ABC’s Once Upon a Time, as Hook’s struggle to return to Emma got hijacked by a Jasmine/Aladdin tale, a boozy Girls Night Out in Storybrooke stole the show, albeit with precious little screen time.

After looping in David on Hook killing his father (and then seemingly jilting her), Emma sought to busy herself by at long last digitizing the sheriff’s office’s files :-/  Regina, thankfully, offered to save her from that blatant escape from her woes with the prospect of 2-for-1 drink specials at the new local watering hole, Aesop’s Tables. Emma begs off at first, forcing Regina and Snow (who with a newborn and a sleeping curse back home needs to tie one, if only one, on) to trick Emma into joining them. 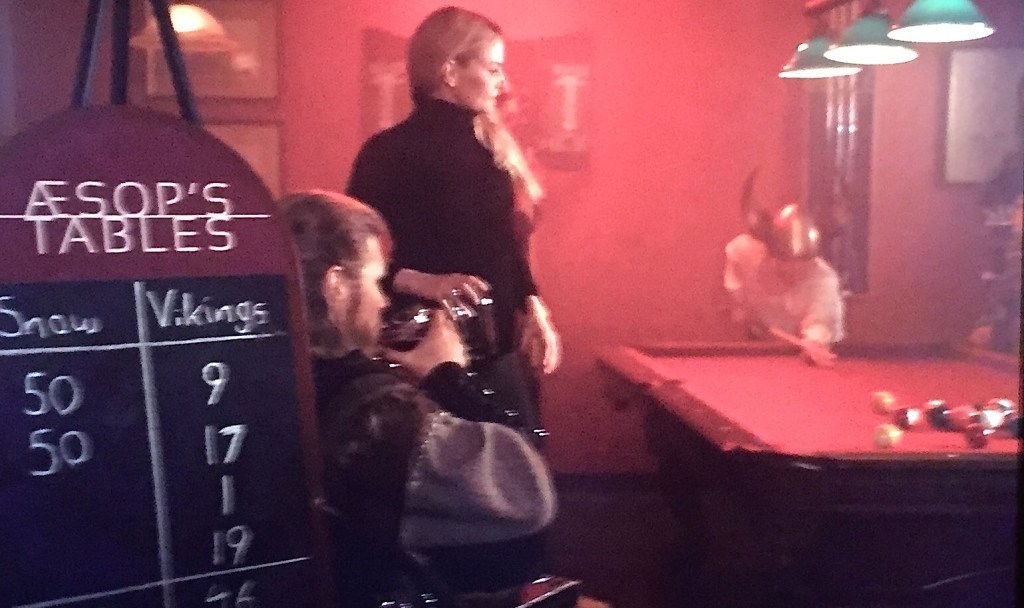 Pardon my crude screen shot, but this moment was everything.

There, Regina (and her sexxxy bar hair) urges Emma to open up about her hurt, but Miss Swan erects her walls anew. Snow meanwhile provides entertainment by taunting some freeloading Vikings, then challenging them to a dangerous version of darts. As evidenced later on, Snow not only handily won that wager, she also robbed the helmet right off one of the brutes. Emma opens up to “mixologist” Aesop, commiserating over their loves lost, enough so to dab her tears with a cocktail napkin. Alas, she will later realize — just as her “shell phone” call from Hook is cut short — that Aesop is in fact Gideon. And with a Savior’s tears now in hand, he — apparently — can keep her OTL from returning home, unless she earns his gratitude by doing what he never could, slaying The Black Fairy.

Sadly, the time it took you to read the above is about all that was afforded the B-story on screen — when, as I tweeted, it could have supported an entire “bottle” episode, where Emma and the two female VIP s in her life discuss life, love and loss. And beat up welching warriors. Instead, Hook’s unplanned voyage with Captain Nemo was waylaid at first by a kraken, and then by the adventures of long-MIA Jasmine and Aladdin, for whom we could have used much more of a “Previously On…” refresher. Especially since I doubt anyone has been vested in their tale, let alone the non-existent chemistry.

Simply said: “Back in the day,” Jasmine sought to avoid marrying Jafar by hitching her wagon to the idea that new friend Ariel’s prince, Eric, could use his navy to fend off the sorcerer. Instead, the “Eric” they ladies found was Jafar in disguise. He dispatched Ariel back to the sea before not destroying Agrabah but taking it “beyond humankind’s grasp” — meaning, we later realize, he entrapped the entire kingdom inside Jasmine’s crown jewel ring.

In the present: Jasmine uses a wish from the magic lamp to save herself, Hook, Aladdin, Nemo and his crew from the sinking Nautilus. Transported to a nearby (snowy) island, they bump into Ariel, who luckily once pinched some of the magic powder Jafar uses to turn adversaries into walking sticks. Tooooo-long story short, Jasmine eventually uses said powder to immortalize Jafar himself, before returning Agrabah to glory with the magic that can break any curse — True Love’s Kiss, from Aladdin. Afterward, Ariel realizes she has a “shell phone” Hook can use to get word back to Emma that he never meant to leave her — which he is able to do, before Gideon makes his latest move against the Savior.

What did you think of the episode “A Wondrous Place”?