Sunday’s FEUD: Bette and Joan took us to the 1963 Oscars, where there was, remarkably, only a single contender in the category of Least Gracious Non-Nominee: a certain Miss Crawford. How ugly did it get? Pour yourself a stiff one — you’re going to need it if you plan to read on.

‘ALL THEY WANT IS A CATFIGHT’ | As we began “And the Winner Is… ,” Olivia — still shooting that 1970s documentary — warned us that Oscar night was really the point of no return for Joan and Bette. If, de Havilland added, Bette had only said that she thought it was a shame that her Baby Jane co-star hadn’t also been nominated, things might have blown over between them. But Davis just couldn’t bring herself to do it. Yes, Olivia had her own Joan to contend with — sibling rival Joan Fontaine — but “my Joan is far worse than your Joan,” Bette told her pal. So would Olivia please fly back to L.A. from Paris to sit next to her at the awards? Davis needed by her side a woman of “comparable stature.” Comparable to… herself… or Crawford? Though the answer was Crawford (ouch), Olivia still agreed. What are friends for?

Meanwhile, Joan had sobered up enough to pay a visit to Academy president Wendell Corey — but not, as you’d expect, to demand a recount of the votes; rather, to volunteer to present the award for Best Picture or Best Director. “Of course,” she hastened to add, “I’m going to require a few things” — among them, a chauffeur-driven limo. But… but… “we don’t do that for presenters,” Corey insisted. “You will for me,” Joan replied. (And she was right.) In private, however, Joan was despondent at the prospect of Bette winning a third Oscar. No, no, Hedda told her. “Her 10th nomination, her eighth loss — that’s how you’ve gotta think of it!” And, to ensure that that was the case, Hopper — incensed that Davis had never understood that hypocrisy was a necessary evil in Hollywood — hatched a plot to put the Best Actress statuette in Crawford’s hands! 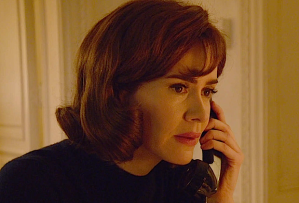 ‘HOLLYWOOD SHOULD BE FORCED TO LOOK AT WHAT THEY’VE DONE TO HER’ | Hedda’s scheme was as simple as it was diabolical: She’d run around badmouthing Bette to the Academy’s voters to prevent Davis from winning, while Joan ran around convincing the other nominees to let her accept on their behalf. Sometimes, it was easy. Anne Bancroft, for instance, actually admired Crawford’s work in Baby Jane and wasn’t going to miss her Broadway performances to attend the ceremony. Other times, it took a bit of… force. During a call to Geraldine Page (Sarah Paulson), Joan first unsettled the nominee by suggesting that she’d based her fading-star character in Sweet Bird of Youth on her, then made her feel like she wasn’t going to be glamorous enough for Hollywood’s biggest night. 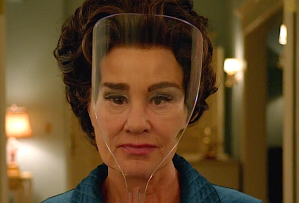 ‘WAIT UP FOR ME, BOYS! TONIGHT I’M BRINGING YOU HOME A BABY BROTHER!’ | Come Oscar day, it was all hands on deck at Casa Crawford. “Do not speak, just work,” Mamacita instructed the army that assembled to paint Joan’s face and dress her up as a silver Oscar. That evening, the actress’ date, director and longtime friend George Cukor, advised her against going through with what would be widely recognized as a “petty act of revenge from a woman scorned.” You’re bigger than that, he insisted. To which Joan gave possibly the saddest response ever: “No, I’m not.” Across town at Bette’s, Davis was explaining to Olivia that one of her Oscars had the gold plating rubbed off because she held it so much, to remind herself of that one perfect evening when she’d felt loved.

On the red carpet, while Bette admitted that she really wanted to win, to break the record and take home a third Oscar, Joan told a reporter who asked for whom she’d voted in the Best Actress race: “The winner.” (Lord, she really does make it hard to feel sorry for her!) Inside, Crawford turned the greenroom into her own private party, tormented young victor Patty Duke (saying now, “the only way to go is down”) and, when Bette discovered her nemesis holding court, said “Good luck!” with the confidence of someone who knew that no luck would be good enough. Finally, when Anne Bancroft was announced as Best Actress, Bette looked as if she’d been struck, and Joan strutted on stage as if she’d really won. Which, in a contemptible way, she arguably did.

Is it just me, or doesn’t it get harder every week to see how Joan and Bette’s lives and careers were manipulated by everyone around them? I’m not even sure who’s worse anymore — Hedda, Warner or that spineless Bob! Your pick?