Whew… anyone else need a couple of Otter Bay cocktails after that?

Sunday’s marvelously tense, emotionally draining season finale of Big Little Lies answered just about all of our burning questions — and served as a damn fine episode of TV to boot. Before you rush down to vote in our poll (and give the finale an “A,” obviously), let’s dig into the highlights.

We open with yet another instance of vicious domestic abuse at the hands of Perry, with Celeste lying on the floor gasping for air. Perry insists she “just got the wind knocked out of her,” and assures the boys she’s fine. But the way Celeste cowers away from him, meekly holding her hand up in surrender and flinching when he touches her, is flat-out heartbreaking. (Reese was my early Emmy favorite, but Nicole Kidman is really making a late push, isn’t she?)

RELATED Big Little Lies: Will There Be a Season 2?

A few other men here aren’t exactly saints, either. When Madeline spots Joseph’s wife Tori stalking her, she runs to tell him about it. But he responds by bluntly offering to have sex with her again, and when she refuses, he calls her a “rich bitch” and orders her out. Then Renata’s husband Gordon corners Jane at the coffee shop and threatens her with a restraining order if she ever comes near Renata again. But hey, the barista Tom steps up and kicks Gordon out — and even asks Jane out! (No, he’s not gay, despite what Madeline said.) We’ve got a good one! 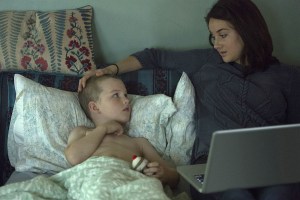 We also get our first burning question answered when Ziggy claims to be too sick to go to school. Jane thinks it’s because no one at school wants to play with him, but he says he has lots of friends… including Amabella. (“She likes Star Wars, too.”) Jane’s confused: So Amabella doesn’t think Ziggy’s hurting her anymore? No, Ziggy says, and he knows who the real culprit is. He swore to Amabella he wouldn’t say, but Jane talks him into pointing out the abuser on a school photo. He points to… Celeste’s son Max. Hmmm, the woman-beating apple don’t fall far from the tree, do it?

Jane breaks the news to Celeste, though she admits Ziggy might be lying: “Violence could be in his DNA, given who his dad is.” (Oof, that one hits Celeste hard.) Jane reassures her that it’s just childhood bullying, and Max will grow out of it. “Sometimes they don’t,” Celeste replies coldly. She goes home and hugs Max tightly, encouraging him to tell the truth about what happened at school: “We all do bad things sometimes.” The kid weeps in her arms. So that’s one mystery solved.

Then we arrive at the lavish “Elvis & Audrey” fundraiser — aka the moment we’ve been waiting all season long for. And it doesn’t disappoint: The sense of slowly building tension is incredible as the moms and dads arrive, decked out in costume. Madeline and a clean-shaven Ed have an awkward run-in with Joseph and Tori… and Ed definitely notices. And Jane (who looks great as Breakfast at Tiffany’s-era Audrey) brings Tom as her date! But as Celeste and Perry prepare to leave home, he hands Celeste her phone and says she has a message from Tracey, the property manager at her new apartment. She freezes in fear. He knows, basically.

On the drive over, Perry presses her about the apartment, and she admits she’s leaving him. When they arrive at the party, Perry aggressively drives past the valet and parks the car himself, locking Celeste inside with him. He tells her she can’t do this: “You have to think about the boys.” She tells him Max is the one hurting Amabella, and twists the knife by saying it’s no wonder: “They know what their father does to their mother.” Perry breaks down in tears, insisting he’ll change and asking for her help in getting rid of “these f–king demons in here.” But she’s made up her mind: “I should’ve left you a long time ago.” A knock on the car window from Renata gives Celeste a chance to escape. 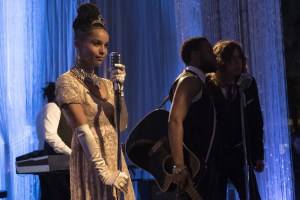 Inside the party, Bonnie is singing — beautifully, of course — and an increasingly drunk Madeline snipes: “I’m sure the room is full of erections.” A mesmerized Ed replies: “Yeah.” (!) He follows Bonnie on stage and, after a sip of his triple vodka rocks to steady his nerves, sings “The Wonder of You.” And he’s really good! It’s a sweet love song, and the look on Madeline’s face as she watches him — a mix of long-dormant affection and overwhelming guilt — is fascinating. (Bravo, Reese.) She runs off in tears, and confesses to Jane that she cheated on Ed: “He’s the greatest man I’ve ever known. I feel like a selfish f–k.”

Meanwhile, Celeste finally enters the party, with Perry following behind. He spots her talking to Renata, and though she’s just telling Renata about Max and Amabella, Perry doesn’t believe her and firmly asks her to come back with him to the car. Celeste refuses, and walks away. She calls the babysitter and tells her to get the boys out of the house, and when Perry confronts her again, she slaps him away — as Bonnie watches from afar.

Renata finds Madeline and Jane, and apologizes to Jane for accusing Ziggy. Jane accepts her apology, and even Madeline softens a little towards Renata: “It takes a really big person to apologize like that.” Now Celeste joins them… and Perry’s right behind her, having downed a tall glass of Scotch. He asks Celeste again to come back to the car, and when Renata tries to step in, he gets nasty: “I’m talking to my wife, not you.” Then Jane’s eyes go wide, and she shudders with a sudden realization: Perry is the guy who raped her. We flash back to that scene of her on the beach, and we see Perry is the guy she was running after. 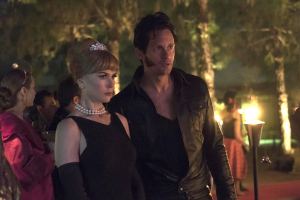 Madeline sees the look of horror on Jane’s face, and Celeste sees it, too. Then Perry lunges at Celeste, and… police lights. We flash forward to the aftermath, with cops and firemen everywhere and detectives standing over Perry’s dead body. He’s lying halfway down a flight of stairs, his throat impaled by some object. The women all tell the cops Perry was beating Celeste and then he fell, but the main investigator (the one with the clicking lighter) isn’t buying that it was an accident. She thinks he was pushed.

As we see shots of Perry’s funeral and the women enjoying a peaceful day at the beach together with their kids, we see what really happened: Perry grabbed Celeste and started beating her, pushing the other women off of him. With Celeste on the ground, he kept kicking her… until Bonnie ran in and shoved him down the stairs to his (accidental) death. In the aftermath, Bonnie and Madeline share an intimate embrace, their petty differences finally behind them. These women spent all season fighting each other — but when they joined forces, they were able to slay a monster.

* Bonnie, Ed, Nathan… so is everyone in Monterey just an amazing singer, or what? I suspect at least some of that singing was dubbed; in the credits, there are three names listed as “Trivia Night Vocalists.” But I could also see that being Zoe Kravitz’s real voice. She is Lenny’s daughter, after all.

* A great little character moment came when Perry entered the party and two of the moms fawned all over him, not wanting him to leave. (Hey, they don’t know he’s a savage wife-beater. He’s hot!) Then after Perry walked away, one of the women turned to Gordon, disappointed: “Gordon, how are you?” Ha!

* So Madeline never told Ed about her affair, huh? It seemed like maybe he knew already, or at least suspected. And the truth would come out eventually… like the next time Madeline “mis-drank.”

* I liked the epilogue, even though we heard virtually no dialogue from the women after Perry’s death. (Jean-Marc Vallée’s artful direction filled in the gaps beautifully.) But I do have to question one thing about that happy ending with all five women together on the beach: So Amabella is OK hanging out with Max, the boy who abused her? I guess his father’s death made his violent tendencies magically disappear?

* And I have to agree with my esteemed colleague Michael Ausiello: We need a Season 2. I know, I know, it’s based on a book, and they covered the entire plot in one season. But wouldn’t you love to see how Celeste moves on after Perry? How Madeline and Ed work things out? How long these women can remain friends before things go south again? I’m sure if Reese and Nicole wanted a Season 2 to happen, it would happen. So get to work, ladies — please.

But what did you think? Vote in our two polls — one on the finale, the other on the season as a whole — then hit the comments to share your thoughts.