Is a Once Upon a Time curse poised to end? Does Lucifer have some ‘splaining to do? Does Arrow‘s Felicity need an intervention? Will Scorpion‘s wedding go off without a hitch? Read on for As to those Qs plus teases from other shows.

Anything you can tell us about Once Upon a Time’s Snowing? —Kat
“More romance and adventure are coming” for the marrieds, Once co-creator Adam Horowitz assures — despite the fact that they thus far are still trading Zzzzzs as part of the sleeping curse. Episode 17, titled (ahem) “Awake” and airing in mid-April, is a “big Snow/Charming episode, where we flash back to another chapter of their past which we haven’t seen in full. We think it is, as befitting the couple that started the show, an incredibly romantic story showing just how powerful their love is.”

Any hint as to when Arrow’s Thea will return? —Jenny
Willa Holland will be on hand for the final three of this season’s five remaining episodes. “Thea is the daughter of sociopaths, which is one of the biggest challenges any human being can really face,” notes co-showrunner Wendy Mericle, “so she’s going to grappling with that and trying to understand: What is this in her that makes her so kind of Moira-esque, and how is she going to manage it? Ultimately, she and Oliver are going to come to the same conclusion about how to do that, by the finale.”

Any information on the fallout of Arrow‘s Felicity joining up with Helix? There’s no way it can end well!! —Sam
Indeed. “We’re going to come face-to-face with Felicity’s Helix acquaintances and her allegiances to them,” David Ramsey previews, “and the stakes are going to get higher before they get lower. Diggle’s had a heart-to-heart with her, like he did with Oliver nearly every week in Season 1 and 2, and he appealed to her higher, moral self. But we’re going to get past talking at this point. Now it’s time to place foot to rear ends, as it were.”

Lucifer is returning in five weeks. Do you happen to have any teases you can share? Maybe about Lucifer and Chloe’s relationship? —Stephanie
When the Fox drama returns on May 1, Lucifer and Chloe “are on rockier footing than we’ve ever seen them,” says co-showrunner Joe Henderson. After all, Luci up and left in the wake of kissing Chloe and then saving her life! When he resurfaces hoping to pick up where they left, “Chloe’s confused, hurt and pissed,” says the EP. “And she’s even more thrown when she learns where Lucifer ran off to, and why.”

Too soon for Mr. Robot scoop? —Ben
Nope! Prepare to meet Angela… as a 6-year-old, seeing as the acclaimed USA Network drama is casting for Season 3 a wee version of Portia Doubleday, as well as said tyke’s ill-fated momma. 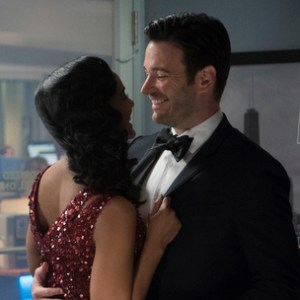 Any scoop on Chicago Med’s Connor and Robin? —Semaj
The couple’s happy days may be numbered. “There will be new challenges between them,” executive producers Diane Frolov and Andrew Schneider tease. And it sounds like those challenges are coming sooner rather than later: In the April 6 episode, Connor worries when Robin exhibits some unusual behavior.

Anything about Chicago Justice? —Carlynn
Joelle Carter tells us that this Sunday’s episode of the NBC newbie will shed some light on State’s Attorney Investigator Laura Nagel. “You get to learn a little bit more how she works, how she’s about justice for the victims and survivors,” says the Justified alum. “Her biggest flaw is that she’s really, really married to her job — and maybe that’s part of why her marriage didn’t work, and it might be part of the reason she’s losing custody [of her child]. But a big reason is that she was addicted to painkillers because she got shot in the line of duty. She is not necessarily addicted to them anymore, but that bit of evidence went in the records.”

Any Scorpion info on Happy and Toby’s impending nuptials? —Amanda
Let’s just say that Team Scorpion should never take a case — no matter how easy it seems — on someone’s wedding day. But with a Best Ma’am like Paige and Dudes of Honor like Cabe, Sly and Walter, “Quintis” just may have a shot at trading I Do’s this May. 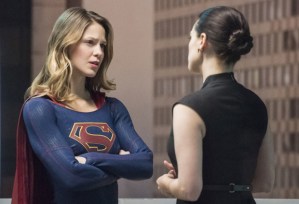 already know that Kara is Supergirl? —Gabriela
If she doesn’t, mild-mannered reporter Kara running around in the new promo with her famous “S” playing peek-a-boo surely risks her secret being spied by someone. When we asked Melissa Benoist if Lena might already suspect what Kara is concealing beneath her sensible sweater sets, she answered, “I don’t know — but you can never trust a Luthor. So, maybe?”

Do you have any scoop on Imposters‘ upcoming finale? I think it’s officially my favourite new show of the season, something I never would have expected considering I only started it because I like Parker Young’s face. —Aisha
All we can share right now is that amid the twisty, turny finale (airing Tuesday, April 11), Uma Thurman will put in another appearance as Lenny Cohen.

Any update on New Girl‘s renewal prospects? —Gary
As Brett Baer told Michael Ausiello, “All indications are that it’s a very good possibility that we are coming back.” And if there is a Season 7, you can expect more fallout from this week’s revelation that Schmidt’s real name is Winston. “There might be a whole episode where we do a mistaken identity kind of thing” involving Max Greenfield and Lamorne Morris’ like-named characters, teases Baer, adding that the coincidence will be “the gift that keeps on giving.”

Any return dates for The Ranch or F Is for Family? —Lonnie
A Ranch date should be coming soon, but I have no word on the latter.

Any word on when the last season of Episodes on Showtime will air? —Mary Ann
I’m hearing “Matt LeBlanc” & Co. will return this summer.

Anything on Suits Season 7? —Beverly
I think we’re about to meet the doc who’s been shrinking Louis’ head all these years. The USA Network drama is casting the role of a strong-minded psychiatrist who will be helping a longtime patient (i.e. one of the series’ regulars) process a painful breakup. 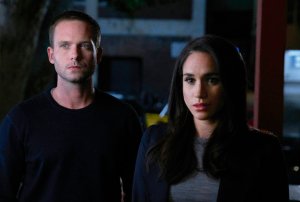 What’s up with all the rumors that Meghan Markle is leaving Suits to go off and be a princess? —Carrie
That’s a royal falsehood. A Suits spokesperson tells TVLine that the show’s entire “main cast remain confirmed to return in Season 7” — Prince Harry’s real-life sweetheart included.

Anything to tide us over until The Flash returns? —Goldi
Before Season 3 of the CW hit races to an end, two characters that have never shared a scene before, will.

Do you have one last teaser for Legends of Tomorrow? —Dee
Asked to sum up Tuesday’s Season 2 finale in two words, Brandon Routh offered us, “Double impact.”

Any chance for one final scoop on the Grimm finale? —Jen
David Giuntoli takes Nick somewhere we’ve never seen before, emotionally, and the result is rather effective. Also, there’s one shot right before a commercial break that will take longtime fans’ breath away.

Real questions, real answers! If you need the Inside Line on a favorite show, email InsideLine@tvline.com! (With reporting by Vlada Gelman and Kim Roots)