Legion‘s mutant hero David finally got rid of the monster that’s been torturing him since childhood and took full control of his powers… but don’t expect him to save the world anytime soon.

In Wednesday’s action-packed season finale, David — with the help of Cary’s makeshift halo device — fought off an ambush from Division 3 and finally extracted the evil parasite known as the Shadow King from his brain. But the parasite (in the form of Lenny) simply attached itself to Melanie’s unfrozen hubby Oliver, with the two happily driving off together to “someplace warm.” Plus, in a post-credits scene — did you keep watching? — an evil floating orb zapped David, trapping him inside the orb and flying him off to an undisclosed location. So David can’t even have one moment of triumph, huh?

“We wanted to keep the pressure on,” Legion creator Noah Hawley told reporters during a conference call this week. “‘Out of the frying pan and into the fire’ is a pretty good approach to storytelling.” Hawley also wanted to follow in the “proud tradition” of Marvel movies’ post-credits scenes, he says, and “give people the feeling of watching the credits, to let them absorb the complete story they just watched, and then tease them as to what Chapter 2 is going to be.” 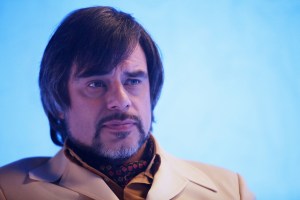 Another tease the finale delivered: that sight of Oliver driving off with Lenny in the passenger’s seat. Hawley says that Season 2 will see David going toe-to-toe with the Shadow King, in the form of Oliver: “There’s going to be something very complicated about going to war with yourself, really… we’ve now created a villain for David that is worthy of building a whole story around.” And yes, he confirms that guest star Jemaine Clement, who plays Oliver, is “rather critical to our story” in Season 2: “I’ve spoken to Jemaine, and he’s excited to come back, so I think we’ll see a lot of him going forward.”

Will we be seeing Professor X anytime soon, though? His name hasn’t been spoken aloud on Legion yet, but it’s been heavily implied that, as in the comics, David’s birth father is the famous founder of the X-Men. “Any person who learns they’re adopted is going to have those questions and want to seek out those parents,” Hawley concedes, adding, “That’s definitely something we’re going to approach.” But introducing Professor X as a character on Legion would require “a corporate conversation” with Fox’s movie studio, which controls the X-Men rights: “I haven’t really dived into that quandary yet… but I certainly need to start thinking about it.” 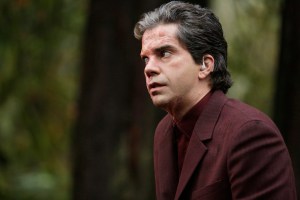 Hawley also explained the thinking behind the finale’s opening scene, which portrayed Clark the Division 3 interrogator (Hamish Linklater) in a surprisingly sympathetic light, showing his painful recovery from David’s attack in the premiere: “I thought it’d be very interesting to start this episode from his point of view, so he’s not just a horribly burned villain walking on screen. He’s a person who has lost something, and is struggling to hold onto his humanity. Now he has a much more sympathetic energy to him… in his movie, David is the villain.”

Season 2 of Legion will likely expand to ten episodes, Hawley says, rather than the eight that Season 1 had: “My feeling with the first season, because it’s such a complex show, was that eight hours was the right amount. Now that the show has its identity… we have the opportunity to broaden it a little bit.” And he’s hoping to launch Season 2 next February… but that’s on top of all the work he’s currently doing on Season 3 of FX’s Fargo, where he’s also the showrunner. “All that means a lot more work for me in the immediate future,” he admits, adding with a laugh: “But I have nobody to blame but myself.”

Now it’s your turn: Give Wednesday’s Legion finale a grade in our poll, then drop your post-finale thoughts in a comment below.